2,500 Year-Old Tablets Tell the Stories of Judean Exiles in Babylon

“By the rivers of Babylon we sat and wept when we remembered Zion.  There on the poplars we hung our harps, for there our captors asked us for songs, our tormentors demanded songs of joy; they said, ‘Sing us one of the songs of Zion!'”  (Psalm 137:1–3)

The Judeans exiled to Babylon in the mid 580s BC left behind more than the Zionist yearning to return to Jerusalem that we read in the Psalms.

A new exhibit in Jerusalem has unveiled more than 100 Mesopotamian clay tablets detailing the daily lives of these displaced Judeans.

The “By the Rivers of Babylon” exhibition at the Bible Lands Museum in Jerusalem is an innovative multimedia display of animated videos, illuminated manuscripts, illustrations and age-specific antiquities.

The most prominent feature is the tablets written in the earliest style of writing—wedge-shaped or cuneiform.  They are on exhibit for the first time and on loan from the private, London-based collectors David and Cindy Sofer. 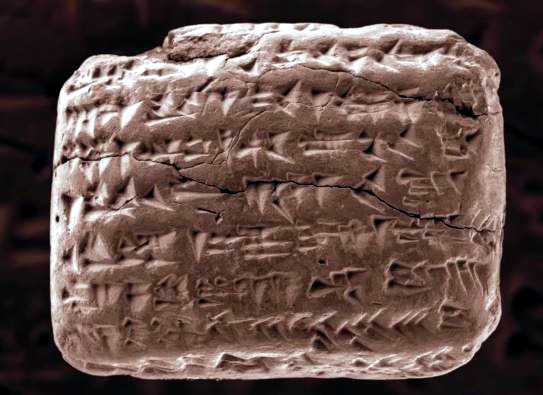 Cuneiform tablet with wedge-shaped system of writing on display at the Bible Lands Museum in Jerusalem.    (YouTube capture)

The tablets themselves serve as vignettes of the period following the First Temple’s destruction.  They cover King Nebuchadnezzar’s displacement of the Judeans to Babylon, his several visits to Judea, and the final destruction of Jerusalem.

Nebuchadnezzar effectively forced thousands of Jewish exiles out of Jerusalem and into modern-day southern Iraq, via Lebanon and Syria.

Transplanting them throughout southern Babylon, Nebuchadnezzar enlisted the exiles in restoring the post-war Babylonian economy.  They were used as forced laborers to dig canals and rebuild infrastructure, according to Assyriology professor Wayne Horowitz of Hebrew University in Jerusalem.  Once they completed this task, they were allowed to live rather freely.

According to the Al-Yahudu (“Jerusalem”) tablets dated to 572 BC, Judeans owned property, plantations, and slaves.  Some Judeans participatied in the bureaucratic hierarchy of Babylon. 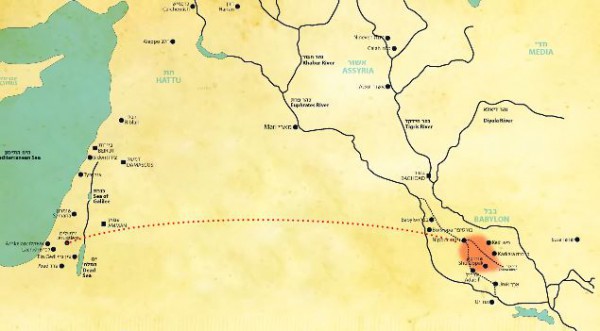 The Al-Yahudu stories include a tracing of four generations, from Samak Yama, born in Judah, to his descendant Judean exile Hagai Ben Ahiqam, resident of a Babylonian “village of Judean exiles” called Al-Yahudu. Ben Ahiqam’s surviving records also outline the division of his father’s inheritance to him and his four brothers.  (JP)

The accounts written in Akkadian script on the palm-sized tablets “illustrate the devastation and resilience of the exiled Judeans as they built their lives in Babylonia,” Vukosavović told Tazpit News Agency.  “Until now we had been unable to tell the complete story of the Babylon Exile and to understand what actually happened to all the Jewish refugees once they were forced out of Judah.”

“We started reading the tablets and within minutes we were absolutely stunned.  It fills in a critical gap in understanding of what was going on in the life of Judeans in Babylonia more than 2,500 years ago,” Vukosavović told reporters.  (Reuters)

In a Tazpit interview, Weiss said the Babylonian Exile “changed the culture, cohesion, and practice of Judaism and the Jewish people,” and saw the institution of the Hebrew calendar and the Babylonian Talmud (in contrast to the Jerusalem Talmud).

It was only after Persia’s King Cyrus the Great brought Babylon under his crown were the Jewish People permitted to return to Jerusalem.

But while Cyrus issued this permission in 539 BC, many exiles and their descendants, including Ben Ahiqam, remained in Babylon, or modern-day Iraq, for the next 2,500 years until Operations Ezra and Nehemiah of 1949 and 1951 brought 130,000 Jews home, reports Anav Silverman, a Tazpit contributor.

Likewise, the Al-Yahudu exhibition shows that God’s promises are trustworthy and His gifts—including the Land of Zion to the Jews —are irrevocable.

“Not one of all the Lord’s good promises to Israel failed; every one was fulfilled.”  (Joshua 21:45)