“I will make an everlasting covenant with them: I will never stop doing good to them, and I will inspire them to fear me, so that they will never turn away from me.”  (Jeremiah 32:40)

In the redemptive pattern presented by the prophet Ezekiel, God promises to Israel, “I will take you out of the nations; I will gather you from all the countries and bring you back into your own land; and then, I will sprinkle clean water on you, and you will be clean … I will give you a new heart and put a new spirit in you.”  (Ezekiel 36:24–26)

The survey stated that 91 percent of Jews in Israel see a Jewish state as necessary for the people’s long-term survival.  They almost unanimously support preferential treatment of Jews who make aliyah (immigrate) to Israel and receive citizenship.

“Virtually all Israeli Jews say they are Jewish — and almost none say they have no religion — even though roughly half describe themselves as secular and one-in-five do not believe in God,” writes the Pew Forum. 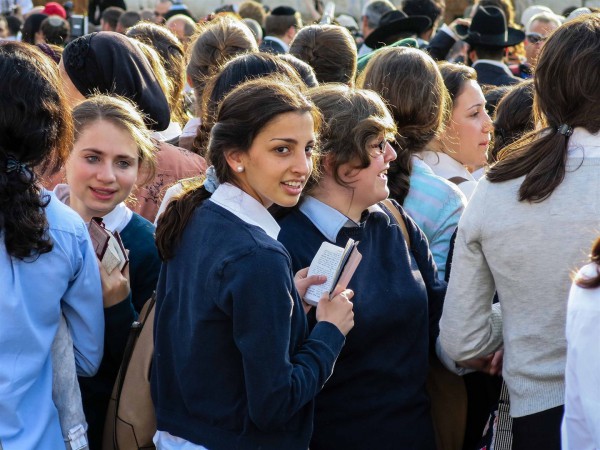 Crowds gather at Jerusalem’s Western (Wailing) Wall for a Rosh Chodesh (beginning of the month) service.  (Photo by Brian Negin)

Of the 5,601 Israelis that Pew surveyed between late 2014 and early 2015, 29 percent categorized themselves as Traditional/ Conservative (Masorti), 13 percent religious/ Orthodox (Dati), 9 percent ultra-Orthodox (Haredi), with secular (Hilonim) taking the largest category, at 49 percent.

Only half of Israeli Jews and those who went to a secular university believe in God with absolute certainty, while almost all Haredi, Dati, Yiddish-speaking, and those educated in an Israeli university do.

Nearly all Haredi, Dati, and 80 percent of Masorti believe that God gave Israel to the Jewish people.  Thirty-one percent of the secular Hilonim also believe that.

However, while secular Jews self-categorize as “the least religious,” various Hilonim still observe several religious Jewish customs, including not traveling on Shabbat, fasting on Yom Kippur and praying.  The definition of “secular” therefore does not imply a lack of belief in God or antagonism toward God, nor do all religious Jews pray or even believe in God. 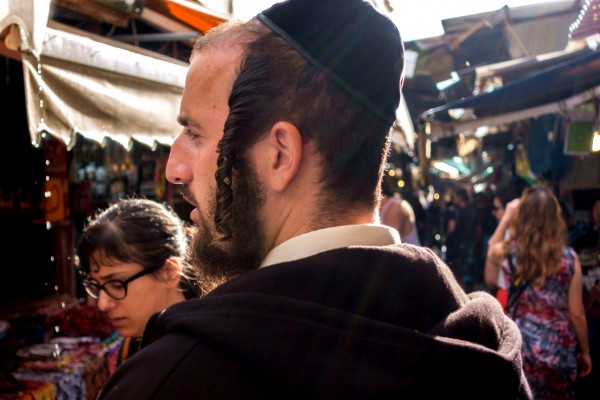 An Orthodox Jewish man shops in a Tel Aviv market.

Orthodox Jews traditionally fall into the Dati (religious) category, ranging from the more liberal modern-Orthodox to the more conservative; Haredi Jews can be identified by ultra-conservative dress (for the women) and black-and-white garb (for the men).

Ultra-Orthodox Jews are more inclined to attend synagogue at least once a week, pray daily, study Torah weekly and think religion is very important than modern-Orthodox Jews.  Yet, according to the survey, 7 percent of Haredim and 9 percent of Modern Orthodox Jews say they never pray.

The Pew Research Center states that “Israeli Jews also are more religiously polarized than US Jews:  they are more likely than US Jews to say they go to synagogue either weekly or never, while Jewish Americans are far more likely to attend synagogue on an occasional basis (e.g., a few times a year).” 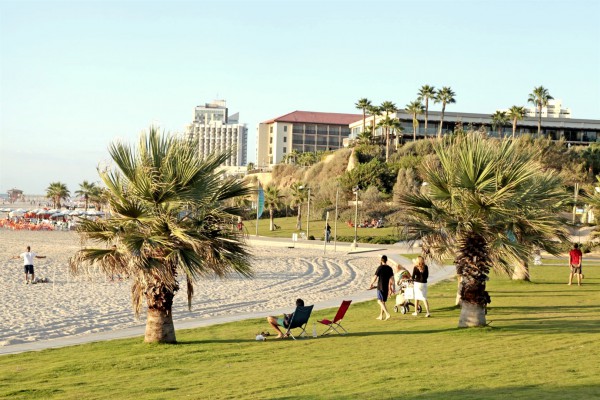 People relax on the beach in Herzliya Pituah, Israel.

Sixty-four percent of Jews do not think Halakha (religious Jewish law) should be state law, including 90 percent of Hilonim and 57 percent of Masorti Jews.  Eighty-six percent of Haredim and 69 percent of Dati Jews believe it should be.  Similarly, 58 percent of Muslims want Sharia law established for Muslims in Israel.

According to the Pew Center, “due to cultural sensitivity over the very idea that God’s existence [could] potentially be denied,” Muslims were only asked if they believe in the Islamic shahada declaration of faith, to which 97 percent agreed.