Thousands Attend the Priestly Blessing at the Western Wall During Sukkot 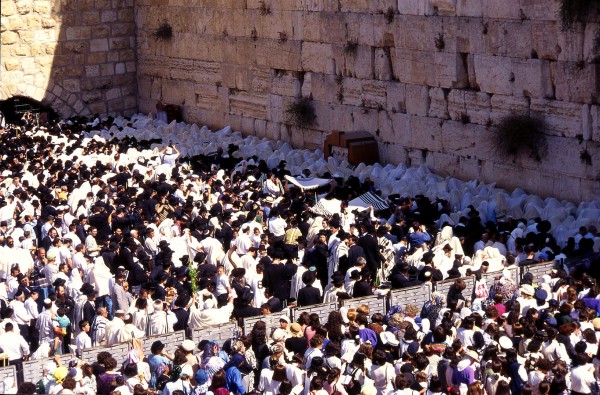 On Sunday morning, thousands of Jewish worshipers from Israel and around the world gathered in the Western (Wailing) Wall Plaza for the traditional Birkat HaKohanim (Priestly Blessing) ceremony held during the week-long celebration Sukkot (the Feast of the Tabernacles).

The special blessing was pronounced by 300 Kohanim (Priests) who stretched out their hands in prayer:

As well, special prayers were recited for the safety and welfare of Israeli soldiers and security forces.

When the blessing was over, Chief Rabbis Yitzhak Yosef and David Lau, and the government administrator in charge of the Western Wall, Rabbi Rabinovich, received guests in the sukkah (temporary dwelling) that had been built in the plaza.

Sukkot is one of the three Shelosh Regalim or Jewish pilgrimage holidays during which Jews traveled in ancient times to the Temple in Jerusalem.  The other two are Passover and Shavuot.

The Priestly Blessing is recited at the Western Wall on all three holidays.