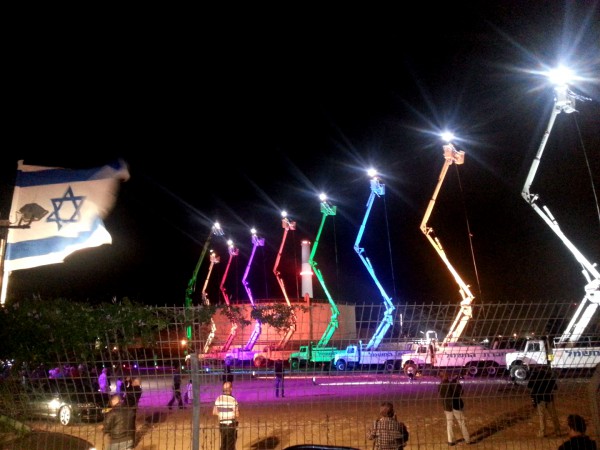 The largest hanukkiah (Chanukah menorah) in the world was lit last night in Tel Aviv during the final lighting ceremony of the holiday.

What is believed to be the world’s largest Hanukkah menorah was lit last night in Tel Aviv on the eighth and final night of the holiday.

Municipalities throughout Israel also lit their own public menorahs, but the Tel Aviv menorah is by far the largest.

The Israel Electric Company (IEC) created the menorah at the Reading Power Station.  It is so large that it has been submitted to the Guinness Book of Records.  Each branch of the menorah projected a beam of light 10 kilometers (6.2 miles).

The menorah consisted of nine aerial platforms.  The Shamash (the “attendant” candle) rose to a height of 28 meters [92 feet] and the other eight aerial platforms were 22 meters [72 feet] high.

One of those lighting the menorah was terrorist victim Eyal Neifeld who lost his sight in an attack that killed nine and wounded 37 on the bus he was riding.  He is currently employed by the IEC as part of a program that encourages providing employment to those with special needs.