As the sun sets here in Jerusalem, the sixth night of Hanukkah begins.  Tonight, all around the world, six candles will be lit on the hanukkiah (special Hanukkah menorah)!

Although Hanukkah usually begins in December, often close to Christmas, it is celebrated very early this year.  On the Hebrew calendar, however, Hanukkah is always celebrated from Kislev 25 to Tevet 2. 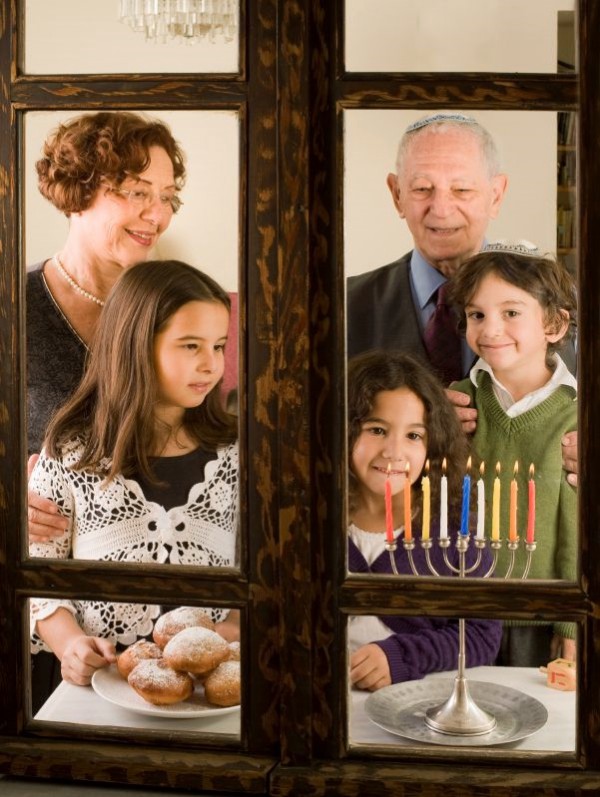 Here in Israel, it is customary to place the Hanukkah menorah in the window facing the street, as a testimony to the miracles of Hanukkah.

Perhaps the best-known custom of Hanukkah is the lighting of the hanukkiah.

This special menorah is used only at Hanukkah, and although it is reminiscent of the seven-branched light stand that stood in the Temple, it is different.

Instead of the Menorah’s seven branches, the hanukkiah has eight candles that are kindled with a special candle called a shamash.  Since the shamash is used to light all the other candles, it is considered to be the servant candle.

This ninth candle is most often elevated over the eight other candles in the hanukkiah and sometimes placed in the middle.

On each night of Hanukkah, one additional candle is added to the hanukkiah.  On the last night, the shamash lights all eight candles.

Since the sixth day of Hanukkah begins tonight, a sixth candle will be added to the hanukkiah.  With the shamash, there will be seven lights. 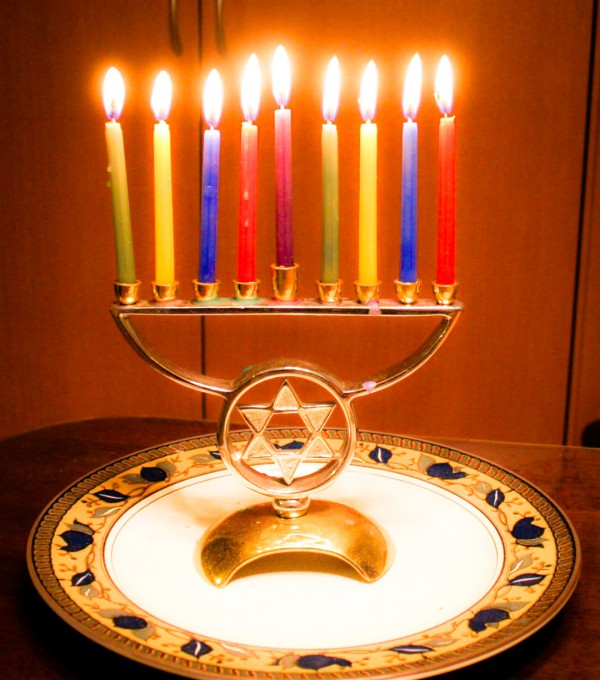 Fully lit Hanukkiah with the shamash in the middle.

Besides lighting the hanukkiah, it is also customary to read stories, spin the dreidel, sing Hanukkah songs, and eat foods fried in oil.

Sufganyot (donuts), which are a favorite here in Israel, and latkes (potato pancakes) served with sour cream and applesauce, are two traditional Hanukkah foods.

As fattening as these deep fried foods are, they are prepared in order to memorialize the miracle God did in restoring the Temple in Jerusalem and saving the Jewish People from the Greek/Syrian army.  (It’s all about the story of the olive oil!) 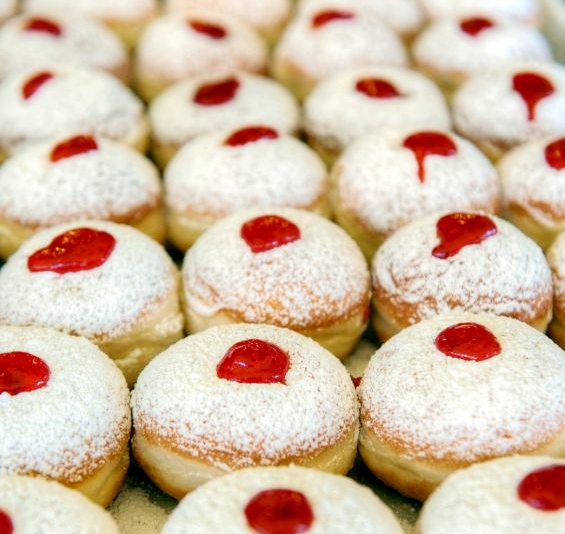 Sufganyot (donuts): The fried foods of Hanukkah memorialize the miracle of a one-day supply of holy oil burning for eight days when the Temple was rededicated.  Sufganyot are sold everywhere in Israel during Hanukkah.

The word Hanukkah comes from the Hebrew word hanukh, which means dedication or education.

Hanukkah is celebrated as the Feast of Dedication to remember the re-dedication of the Temple after God faithfully delivered Israel from her oppressors.

In fact, the reason for lighting eight candles and celebrating Hanukkah for eight nights relates to God’s faithfulness and the miraculous story of Hanukkah.

Between the years 175 to 163 BC, after the death of Alexander the Great, who had conquered and divided the entire ancient world of the Eastern Mediterranean, the area of Judea came under control of the Greek king Antiochus IV Epiphanes.

Antiochus tried to force the Jews to accept Greek culture.  He even defiled the Beit HaMikdash (Temple in Jerusalem) by sacrificing a pig on the altar and desecrating this holy place with the blood of this unclean animal.

As described in the book of the Maccabees in the Apocrypha, this wicked ruler forbade the Jewish people from keeping God’s laws.  In fact, the penalty for keeping the Torah was death.  Many Jewish people chose martyrdom over defying God’s commandments. 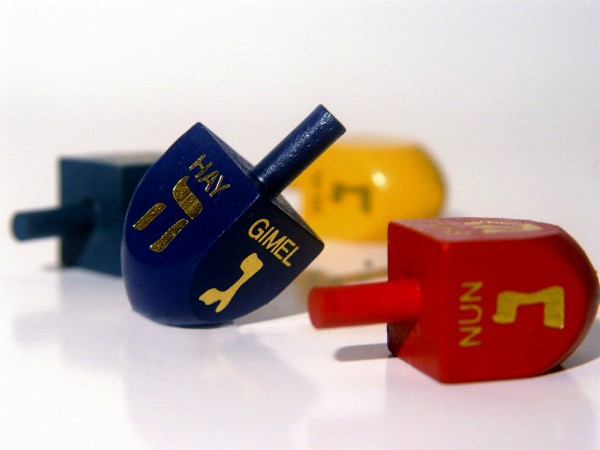 Since the Greeks outlawed the study of the Torah, it was hidden whenever someone approached.  Instead, the dreidels were taken out and played like a game of chance.  The letters nun, gimmel, hey, shin stand for nes gadol haya sham, meaning a great miracle happened there.  In Israel, however, the letters are nun, gimmel, hey, pey meaning a great miracle happened here.

Antiochus also erected a statue of the Greek false god, Zeus, in the Holy of Holies!

As horrible as this was, it was fulfillment of the Hebrew Prophet Daniel’s prophecy concerning the “abomination of desolation.”

The Prophet Daniel wrote: “His armed forces will rise up to desecrate the temple fortress and will abolish the daily sacrifice.  Then they will set up the abomination that causes desolation.  With flattery he will corrupt those who have violated the covenant, but the people who know their God will firmly resist him.”  (Daniel 11:31–32)

A Jewish revolt against this assault on Judaism rose up.  It was led by the courageous freedom fighters called the Maccabees.

This word is an acronym standing for the Hebrew phrase Mi kamocha ba’elim Adonai, which means Who is like you, Lord, among the gods? 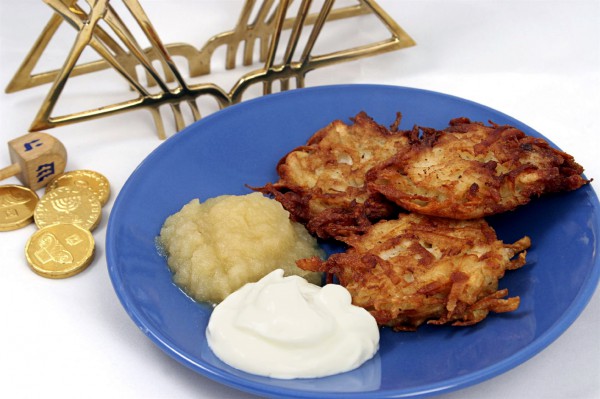 Although greatly outnumbered and overpowered, Yehudah (Judah) the Maccabee led his brothers and some other Jewish men in a valiant battle to drive out tens of thousands of Greeks and re-claim the Temple.

God helped this small group of men, and they won the victory in 163 BC, taking back Jerusalem and rededicating the Temple to God.

Tradition has it that they only found a one-day supply of sealed, consecrated oil for the Temple Menorah; however, the oil miraculously burned for a whole eight days—the time it took to prepare the sanctified oil. 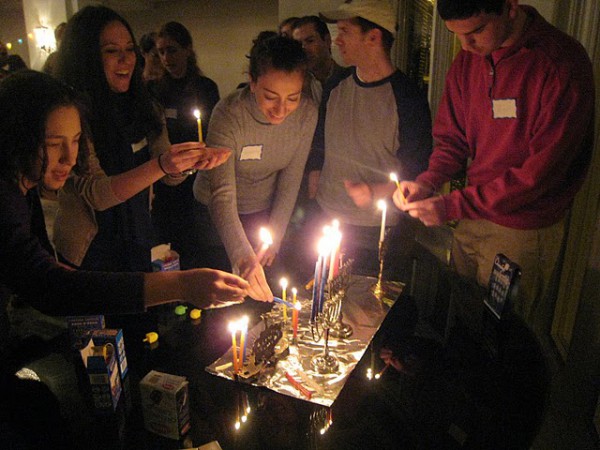 The most common tradition at Hanukkah is lighting the hanukkiah.  It’s lit in remembrance of the eight days that the Golden Menorah in the Holy Temple kept burning on a one-day supply of oil.

Yeshua: The Shamash Who Kindled the Light in our Hearts and Lives

Since Hanukkah is not a holiday ordained by God in the Torah, some wonder if Yeshua (Jesus) actually celebrated it.

“It was winter, and the Festival of the Dedication was being held in Jerusalem.  Yeshua was walking in the Temple precincts, in Solomon’s Portico.  The Jews gathered round Him and asked: ‘How long must you keep us in suspense?  If you are the Messiah say so plainly.’”  (John 10:22–24)

Yeshua went to Jerusalem for the Feast of Dedication (Hanukkah), and while in the Temple area He proclaimed, “I and the Father are one.”  (John 10:30) 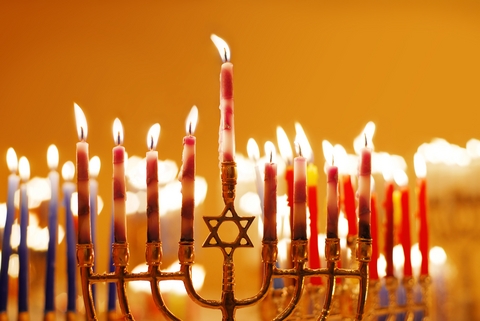 Shamash: Yeshua the Messiah, like the shamash candle, kindles the light in our hearts and brings us out of darkness into the light of life.

Just as the shamash on the hanukkiah is the servant candle that lights the other eight candles, Yeshua the Messiah came as a servant to be the light that shines in and through us to others.

John confirms that Yeshua is the light that darkness cannot overcome.

“In Him was life, and that life was the light of all mankind.  The light shines in the darkness, and the darkness has not overcome it.”  (John 1:4–5)

Darkness has no power over the light.  When the lights are turned on, the darkness disappears immediately!  It’s never a struggle or a contest.  Light wins every time!

“When Yeshua spoke again to the people, He said, ‘I am the light of the world.  Whoever follows Me will never walk in darkness, but will have the light of life.’”  (John 8:12) 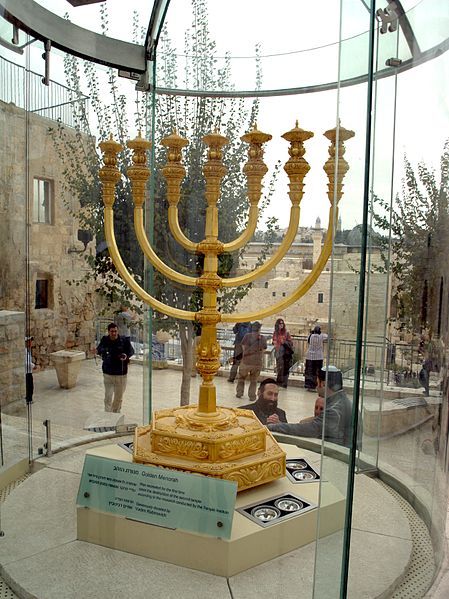 The recreated Temple Menorah: This Menorah in Jerusalem is no mere replica; it’s been created by The Temple Institute for use in the inevitable Third Temple.

The Significance of the Menorah

When the Holy Temple was restored during the time of the Maccabees, the act of re-lighting the Menorah in the Temple represented restoring God’s presence there.

The Temple was set up so that the Jewish people would have a place to come and meet with God.

Without the presence and Light of God, we are all lost.

While the Bible makes it clear that the Temple will once again be rebuilt, today, those who know Yeshua do have spiritual light and are the dwelling place for His Holy Spirit (Ruach HaKodesh).

“Don’t you know that you yourselves are God’s temple and that God’s Spirit dwells in your midst?”  (1 Corinthians 3:16)

Parasha
Giving Others More of God

Feature
Yom Hashoah: The Holocaust-Moving from Grief to Action

Yom HaShoah, a national day of mourning for the genocide of the Jewish People in Europe and the resistance fighters who stood up to the Nazis.

Holiday
Why Is the Third Temple Important?