Has Israel Found Acra, the Greek Stronghold Against Maccabees?

“For you took My silver and My gold and carried off My finest treasures to your temples.  You sold the people of Judah and Jerusalem to the Greeks, that you might send them far from their homeland.  See, I am going to rouse them out of the places to which you sold them, and I will return on your own heads what you have done.”  (Joel 3:5–7)

With Chanukah but weeks away, the Israel Antiquities Authority (IAA) has announced they may have found Acra, the Greek stronghold built by Antiochus IV.   This Greek king desecrated the Holy Temple and devastated Judea before the Maccabees rose to recapture the Jewish state.

From the vantage point of the Acra citadel, the Greeks maintained control over Jerusalem and monitored the Temple Mount.

That evidence includes a massive wall with an embankment, lead sling shots, bronze arrowheads, and ballista stones stamped with a trident, the symbol of Antiochus’ reign. 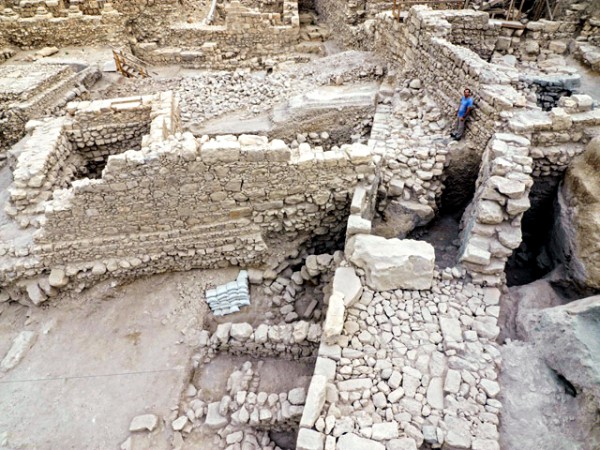 The remains of the Acra citadel and tower uncovered in Jerusalem.  (IAA photo by Assaf Peretz)

These tools of war are “the silent remains of battles that were waged there at the time of the Hasmoneans in their attempt to conquer the citadel, which was regarded as a ‘thorn in the flesh’ of the city,” says a statement by the dig directors.

Other evidence reinforcing the dating of the presence of the Greeks in Judea include numerous coins dating from the reign of Antiochus IV to Antiochus VII, as well as a large number of Aegean region wine jars.

The IAA unearthed what was once a monstrous watchtower that stood during Antiochus’ reign.  “The new archeological finds indicate the establishment of a well-fortified stronghold that was constructed on the high bedrock cliff overlooking the steep slopes of the City of David hill,” the IAA statement read.

“This stronghold controlled all means of approach to the Temple atop the Temple Mount, and cut the Temple off from the southern parts of the city,” they write.  Also an embankment of earth, plaster and stone that was found “extended as far down as the bottom of the Tyropoeon — the valley that bisected the city in antiquity, and constituted an additional obstacle in the citadel’s defenses.”  (JPost) 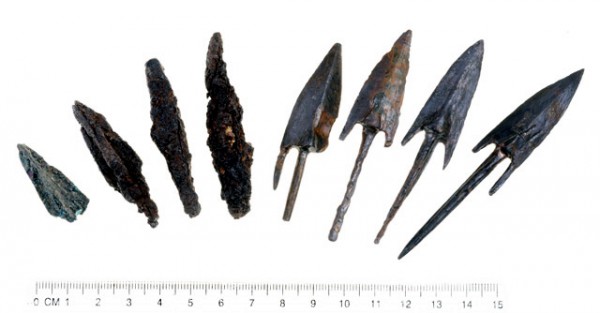 Lead sling stones and Bronze arrowheads stamped with the symbol of the reign of Antiochus Epiphanes.  (IAA photo by Clara Amit)

Both the Book of Maccabees and first century AD Jewish-Roman historian Josephus Flavius describe the stronghold as a tall structure that overlooked the Temple.

“In that citadel dwelt the impious and wicked part of the multitude, from whom it proved that the citizens suffered many and sore calamities,” Josephus wrote.  He also recorded that Antiochus had installed in the stronghold a garrison of Macedonians.  (Haaretz)

In 164 BC, three years after the Acra citadel was built, the Maccabee family, known better as the Hasmoneans, recaptured God’s Temple and purified it from the idol of Jupiter, altars erected to Greek gods, and the stain of pigs’ blood that had been offered there.

However, while the first Chanukah was celebrated, the Acra stronghold remained nearby, unconquered. 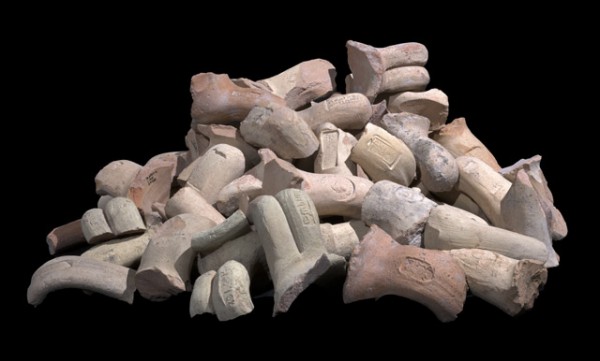 The remains of handles from wine jars used by the inhabitants of the citadel.  (IAA photo by Clara Amit)

Although Judah Maccabee had led the Jews to victory over the occupying Greeks, freeing the Temple and recapturing most of Jerusalem, he did not manage to win Acra.  Neither did two of his sons, Judas and then Jonathan, who led the rebellion after Judas died in battle.

According to Josephus, on the 23rd of Iyar, 141 BC, 23 years after the Temple was freed, Simon, one of the Maccabee sons, succeeded in capturing and destroying the Greek citadel where it stood in the lower part of the city.

The excavations in the City of David National Park are operated by the Elad Foundation and have brought to light artifacts from 10 ancient cultures in Jerusalem’s history.  (JPost)