Nazareth native and Greek Orthodox Priest Gabriel Naddaf has become a champion of the right of Christian Arabs to serve in the military while also promoting the unique privilege Christians have to embrace the Jewish heritage of their faith in the free and democratic Holy Land.

Speaking at a Christian conference in the US in support of Israel, Naddaf praised Eretz Israel (Land of Israel) as the only country in the Middle East where “Christians live in peace and security.  In Israel, they have freedom of speech and religion, they can exercise their faith freely, and they have democratic rights.”  (Breaking Israel News)

As the head of the Greek Orthodox Church in Yafia, near Nazareth, as well as the spiritual leader of the Aramean Christians in Israel, Naddaf served as a speaker and judge in the Court of the Patriarchate in Jerusalem, a religious court authorized to rule on issues of marriage, divorce, and other matters reserved for courts of recognized religions.

Today, Naddaf is the Chairman of the Christian Empowerment Council (CEC) and The Israeli Christian Recruitment Forum, “a civil society organization that works to support Arab speaking Christian-Aramean citizens of Israel to enlist in the Israel Defense Forces,” according to the CEC website.

Though Arab members of the Knesset (Israel’s parliament) have harshly criticized Naddaf’s vision to integrate Arab Christiasn into Israel’s armed forces, the state of Israel publicly recognized him at this year’s Independence Day celebration along with fourteen other distinguished Israelis as they each lit one of fourteen ceremonial torches at the national event, whose theme was “courageous citizens.”

Yet, even Christian Arabs objected to his selection as torch lighter.  Rather than support Naddaf, many Christian Arabs feel compelled to support the Arab line and Palestinian causes.  One of those causes is to publicize the loss of home and land that Arab families incurred during Israel’s War for Independence in 1948.

Another Christian Arab cause is to support the modern movement of Christian Palestinianism, which falsely claims that Yeshua (Jesus) was a Palestinian, rather than a Hebrew and a Jew of the line of King David.

In this respect, Arab Christians in Israel are experiencing an identity crisis — one  which they are also imposing on Yeshua Himself by calling Him a Palestinian.

Partly due to their loyalty to various Palestinian causes, enlistment in the Israel Defense Forces (IDF) is voluntary for Arabs, while mandatory for Jews.  Naddaf, however, has been championing Christian Arab military service since 2012, when he began enlistment campaigns in Christian communities. 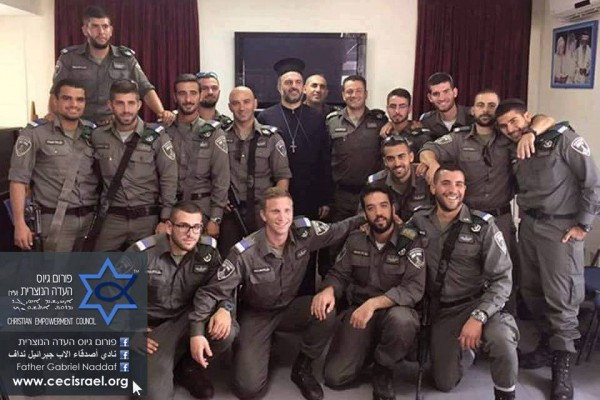 Naddaf sees Christian military service as an opportunity for Believers in Yeshua to become more fully integrated into their homeland as an Israeli and not as an Arab or Palestinian.

Naddaf’s challenge to Christians to embrace the Jewish heritage of their faith and their country is seen by Arabs across the nation as an attempt to divide and weaken Israel’s 1.8 million Arabs, which include Muslims, Christians and Druze.  For this, Naddaf and his family have received death threats and his son was attacked as a teenager.

Yet, he is succeeding in realizing his vision.  For the first time ever, beginning this year, the IDF is sending enlistment letters to all eligible Christian Arab youth at the same time as Jewish youth.  Enlistment is still voluntary for Arabs, but now the State is being proactive in recruiting them.

As a result, Arab member of the Knesset Basel Ghattas (Balad party), who is from a Christian family, complained that “within a year we will see them [the IDF] trying to enlist everyone.  We are obviously against it.  I called to all the young men in the sector to send back the enlistment orders or to burn them at a protest.”

Still, Naddaf’s message to all Christians is this:  “Together with our Jewish brothers we have a joint fate in this land because whatever happens to the Jews here will happen to us.  We therefore need to contribute to the defense of this country along with the Jews.”  (JPost)