On Sunday morning, four-year-old Daniel Tragerman, who was the victim of Hamas’ Friday afternoon rocket attack on Kibbutz Nahal Oz, was laid to rest. 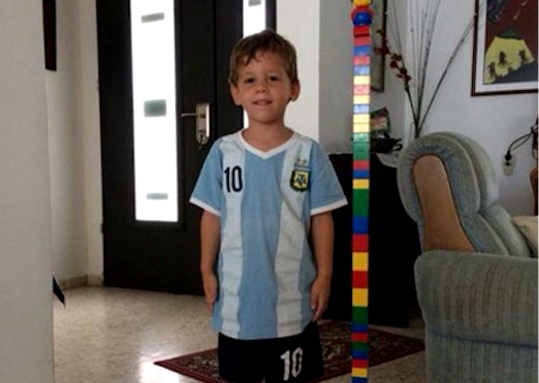 Four-year-old Daniel Tragerman was killed by a Hamas rocket on Friday afternoon.

Daniel was critically wounded by rocket shrapnel in his family home as he ran to the safe room when the code red siren sounded.  With only seconds to reach the room, he didn’t make it.  He died shortly after.

According to the Israel Defense Forces (IDF), Hamas terrorists from the “military wing” of the Al-Qassam Brigades fired the deadly mortar shell from a site “adjacent to the Jafar Ali Ibn Taleb school in the Zeitoun neighborhood of Gaza City.”  (Arutz Sheva)

“Daniel was a smart, kind, sensitive child,” Daniel’s mother, Gila, said on Friday. “We wanted to see him growing up with his brothers and fulfilling his potential.”

Hundreds attended his funeral at the Hevel Shalom cemetary in the Eshkol Regional Council in the northern Negev.

“We were the happiest family in the world, and I just cannot come to grips with it,” his mother said during the service.

“We are with you in deep mourning,” said Alon Shuster, head of the Sha’ar Hanegev Regional Council at Daniel’s funeral.  “Here in this painful place, we are waiting for another day, a day where children can play in their yard and bomb shelters can be just another room.  So many children made it to the bomb shelter and Daniel didn’t make it; we will do all that we can so that life will go on.”  (JP)

The Tragerman’s had only returned to their home in the south a few days before. They had left because of the constant rocket fire from Gaza, but decided to return on the promise of security officials that residents of the south would be safe.

When Hamas bombing resumed, they packed their bags and got ready to leave.  Sadly, before they could, Daniel was killed.