“Go now, write it on a tablet for them, inscribe it on a scroll, that for the days to come it may be an everlasting witness.”  (Isaiah 30:8)

For decades, antiquities robbers have sneaked into the caves of the Judean Desert and have stolen away portions of the Dead Sea Scrolls, according to the Israeli Antiquities Authority (IAA), which has launched a rescue mission to retrieve the final manuscript fragments.

“For years now our most important heritage and cultural assets have been excavated illicitly and plundered in the Judean Desert caves for reasons of greed,” says a statement by IAA Director-General Israel Hasson.

“The goal of the national plan that we are advancing is to excavate and find all of the scrolls that remain in the caves, once and for all, so that they will be rescued and preserved by the state,” he says.

The first stage of the rescue mission began two weeks ago with a search led by archaeologists Dr. Eitan Klein, Dr. Uri Davidovich, Royee Porat, and Amir Ganor at Nahal Tse’elim, where the Cave of the Skulls is located.

The plan’s first excavation is currently underway in the Cave of the Skulls in Nahal Tse’elim, with the assistance of numerous volunteers.  (IAA photo)

“The excavation in Nahal Tse’elim is an operation of extraordinary complexity and scope, and one that has not occurred in the Judean Desert in the past thirty years,” said a statement by Amir Ganor, the director of the IAA’s Unit for the Prevention of Antiquities Robbery.   “There are hundreds of caves in cliffs in the area, access to which is both dangerous and challenging.  In almost every cave that we examined we found evidence of illicit intervention and it is simply heart-breaking.”

“The loss of the finds is irreversible damage that cannot be tolerated,” Ganor added.  “Despite the rigorous enforcement actions taken against the antiquities robbers, we still witness acts of severe plundering that unfortunately are possible in such large desert expanses.”

In November 2014, a band of robbers were caught red-handed 80 m (260 ft) above the Cave of the Skulls, at the top of the cliff, after an afternoon of plundering the cave.

Located 250 m (820 ft) above the base of the wadi on the side of a precipice, the robbers used sophisticated climbing and rappelling gear as they traversed a dangerously narrow goat path to reach the cave and then ascend to the top of the cliff for the night.  With artifacts in their possession that date to the Roman period and the Neolithic period, the pillaging villagers from Sa’ir, near Hebron, were arrested, sentenced, imprisoned, and fined 100,000 NIS each.  (MFA) 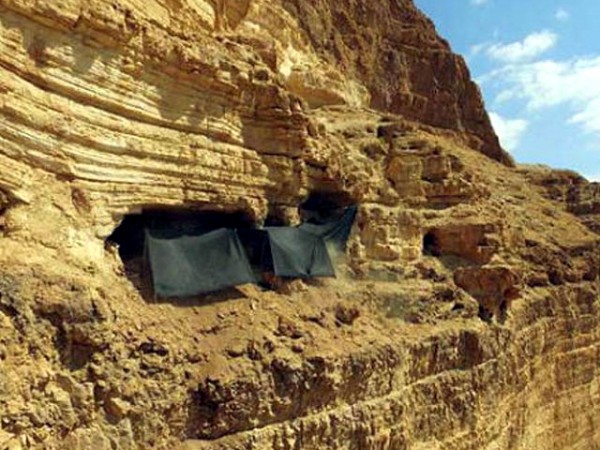 The cave where the archaeological excavation is being conducted is situated 80 meters from the top of the cliff and 250 meters above the base of the wadi.  (IAA photo by Guy Fitoussi)

“The antiquities robbers are plundering the Land of Israel’s history, which is something we cannot allow,” said Knesset Member Miri Regev, the Israeli Minister of Culture and Sport, in an IAA statement.

“It is our duty to protect these unique treasures, which belong to the Jewish people and the entire world.  I will work to increase the punishment against those that rob our country’s antiquities,” she stated.

A thorough excavation of the Cave of the Skulls is now underway, conducted by experts from the Caves Research Center at Hebrew University, a team from the Unit for the Prevention of Antiquities Robbery at the IAA, and more than 500 volunteers from around Israel, who are camping in the desert, according to the IAA.  Additional volunteers have been turned away due to inadequate infrastructure.  (MFA)

The Antiquities Authority, MK Regev, and the Heritage Project of the Ministry of Jerusalem Affairs will be working together to promote the comprehensive rescue mission on all the caves along the Dead Sea and elsewhere in the Judean Desert.

Their goal remains to collect and preserve the ancient writings, some of Israel’s oldest remaining records in Hebrew, which have been dated between c. 250 BC and c. AD 68. 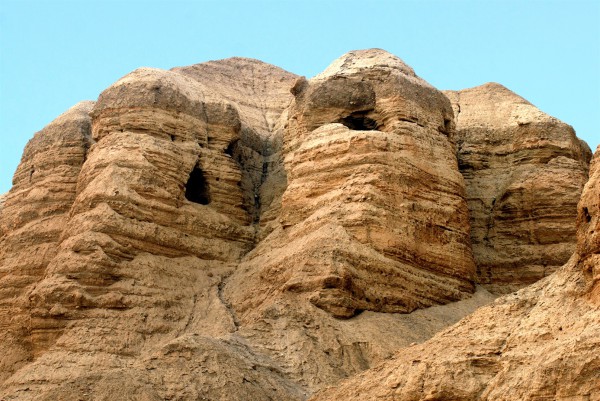 These Qumran caves in the Judean Desert show just how challenging recovering the Dead Sea Scrolls can be.

The first collection of ancient Hebrew and Aramaic parchments dubbed the Dead Sea Scrolls was found in 11 caves near the Qumran wadi between the mid-1940s and mid-1960s.

Two months before Israel became a nation again, in March 1948, excavators found the oldest known Hebrew manuscript of the Book of Isaiah.  In 1949, they found Hebrew versions of Jubilees and Testament of Levi.   Three years later, they found the “Copper scroll,” a treasure map of sorts written on 99% copper and 1% tin.  In 1952, Aramaic versions of 1 Enoch and Tobit (written by Samuel), and fragments of the Damascus Covenant were found.  In 1963, ben Sirah and the Songs of Sabbath Sacrifice were recovered.  (Gnosis)

These official findings joined numerous others that have been found by Bedouin herders and looters who would sell them on the market.