“‘This is what the Sovereign Lord says: I will gather you from the nations and bring you back from the countries where you have been scattered, and I will give you back the land of Israel again.’ … I will give them an undivided heart and put a new spirit in them.”  (Ezekiel 11:17, 19)

On Tuesday, Israeli President Reuven Rivlin welcomed the start of the 2015–2016 school year at an elementary school in Peduel, a community in Samaria.

“Peduel is the symbol of connection—a link between the Biblical [Israelite] kingdom and the state of today,” Rivlin declared.  “Samaria is here, Jerusalem is here and Tel Aviv is here.”

As part of this miracle of the end-time restoration of Israel, France-born Adam Lugassy had the opportunity to meet the president of the State of Israel on his first day of fourth grade.

Lugassy first met Rivlin in the library and told him in French: “Hi Mr. President, I am glad to be here in Israel and to learn Hebrew in ulpan.” 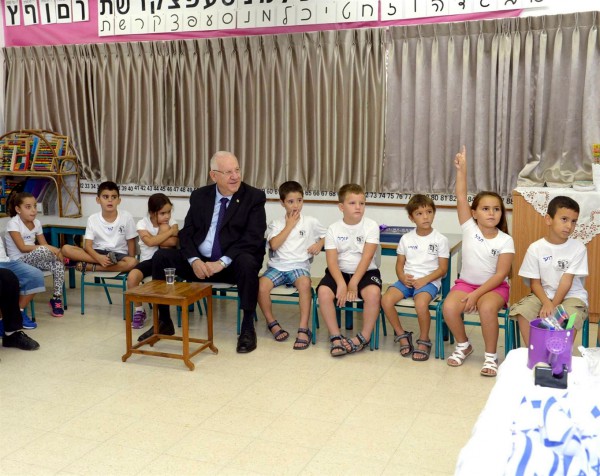 Israeli President Reuven Rivlin makes the start of the new year memorable for school children by visiting a classroom.

Later, before hundreds of students at the assembly, Lugassy read a few words written for him in Hebrew, “My name is Adam.  I came from France to the Land of Israel.  Our aliyah is part of the process of redemption that will come soon.”  (JP)

The Lugassy family had made Aliyah (immigration to Israel) less than a month ago on August 7, moving to the Peduel settlement in Shomron (Samaria) where they can be free to be Jewish.

“In France a lot of people do not agree with what Israel is doing.  They link Jews with Israel, so they are not very friendly with us,” said Lugassy’s mother, Yael.  “We knew we did not have a future in France.”

The family is among almost 5,000 who made Aliyah from France this year.  About 120 French immigrants have moved to the Samaria region of the West Bank.

“The concept of nation and homeland as an essential part of serving God is slowly returning to the world, and is certainly part of the process of redemption,” writes Adam Eliyahu Berkowitz for Breaking Israel News, describing the ingathering of the exiles written about in Deuteronomy 30:3, the Psalms, and the Books of the Prophets.

Because Lugassy had learned Hebrew at his Jewish day school in France, he was chosen to be the ambassador of the dozen new French immigrants in the Shilat elementary school library to speak to the president. 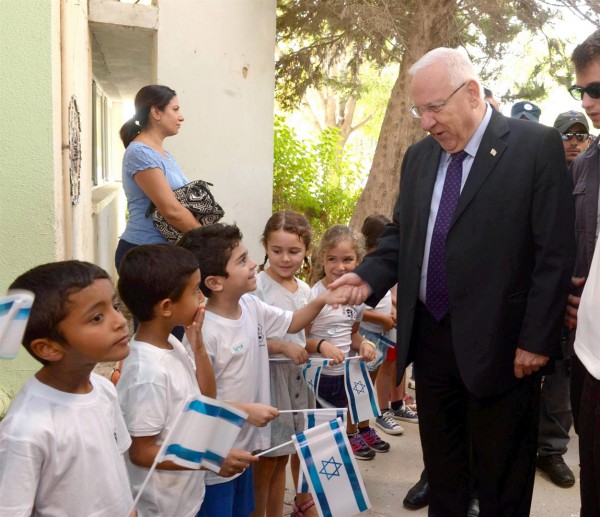 Yael told The Jerusalem Post that their choice of a Samarian settlement was not based on ideology but rather on the community’s hospitality and school system.

“Everyone here has been so kind and everything is prepared and organized for our children,” she said.

Rivlin used a translator to speak with the French students, stating his happiness to meet new immigrants.  Samaria Regional Council head Yossi Dagan added, “The president came here because he loves Samaria and he loves you.”

During the school assembly, Rivlin described the rich history of Samaria and affirmed that settlements such as Peduel are as much a part of Israel as Tel Aviv.

“It [Samaria] connects the Biblical kingdom of Israel with the modern state.  Those who live here know that we will never again lend our hand to the dissolution of Jewish sovereignty,” Rivlin said.  “We did not come to Israel because we fled the Holocaust or pogroms; we came and we will continue to settle it out of happiness and joy and the understanding that this is our land.”

“Every stone and tree tells a story,” Rivlin added about Peduel.  “The geography, much like the archeology of Samaria, is like the photographs of a family album.  Those who live here live in the middle of a lesson in history, in Bible, in citizenship and love of the land.”  (JPost)

During the assembly attended by several hundred students and many of their parents, the president sang along with several pupils performing the Hebrew song “Jerusalem of Gold” by Naomi Shemer.

From his seat in the front row, Rivlin sang into a microphone and, near the song’s end, took a verse solo: “Jerusalem of gold and of bronze and of light.  Behold, I am a violin for all your songs.”  (Arutz 7)

Shemer composed the well-known song while parts of Jerusalem and Judea-Samaria were under the Jordanian siege, between 1949 and 1967.  Jordan occupied and, in a largely unrecognized move, annexed the territory, naming
it the Hashemite Kingdom’s “West Bank.”

On Monday, at the president’s residence, Rivlin spoke with a group of elected officials from Jewish settlements, emphasizing his support for residents there and affirming that settling the Land of Israel is the historical right of the Jewish People

“Our right to this land is not a matter of political debate.  It is a basic fact of modern Zionism.  We must not give anyone the sense that we are in any doubt about our right to our land.  For me, the settlement of the land of Israel is an expression of that right, our historical right, our national right, stemming from a love for the land of Israel, [and] from a recognition of our roots, which come together here.”