Illegal construction by the Jordanian Islamic Waqf of dozens of toilets and showers above the Western Wall tunnels at the Northwest corner of the Temple Mount platform prompted a stop-work order by the Jerusalem Municipality on May 31st to avoid further damage and loss of archaeological treasures on the Mount.

“There is art there which had adorned the walls of the pillars of the Temple Mount; there are important archaeological remains there,” Dr. Gabi Barkai said, adding that the placement of the bathrooms has made “sewage infiltrating areas of the Western Wall tunnels [a] dangerous possibility” and, “beyond that, there is a danger of flooding.”

“So what is happening there today is a crime of the first order, breaking there all the possible laws, licensing laws, and the laws of the Israel Antiquities Authority,” he added.  (Arutz Sheva) 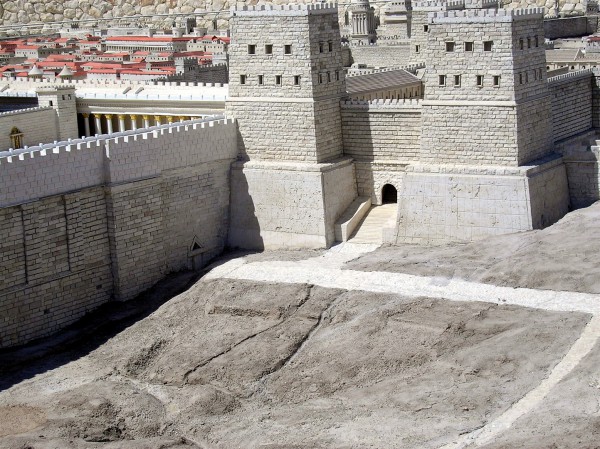 The Antonia Fortress was a military barracks built in Jerusalem on the northeastern side of the city, near the Temple Mount and the Pool of Bethesda.  (Photo by Deror Avi)

The Waqf, a Jordanian trust that administers activities on the Temple Mount while under the sovereignty of Israel, is facing a lawsuit by the Israel Antiquities Authority (IAA) for building bathrooms inside the ancient Antonia Fortress, a complex whose southern wall is shared with the northern wall of the Temple Mount at the northwest corner of the Mount.

The Antonia Fortress, built close to 35 BC by King Herod served as headquarters and barracks for the Romans.  There, the apostle Paul was taken (Acts 21:37), and there he gave his defense as a Roman citizen and a Jewish man who was sent by God to the Gentiles (Acts 22).

The historian Josephus recorded in Antiquities of the Jews that the fortress as having four corner towers, three fifty cubits (73–85 ft) high and one which at seventy cubits (102–119 ft) “commanded a view of the whole area of the Temple.” 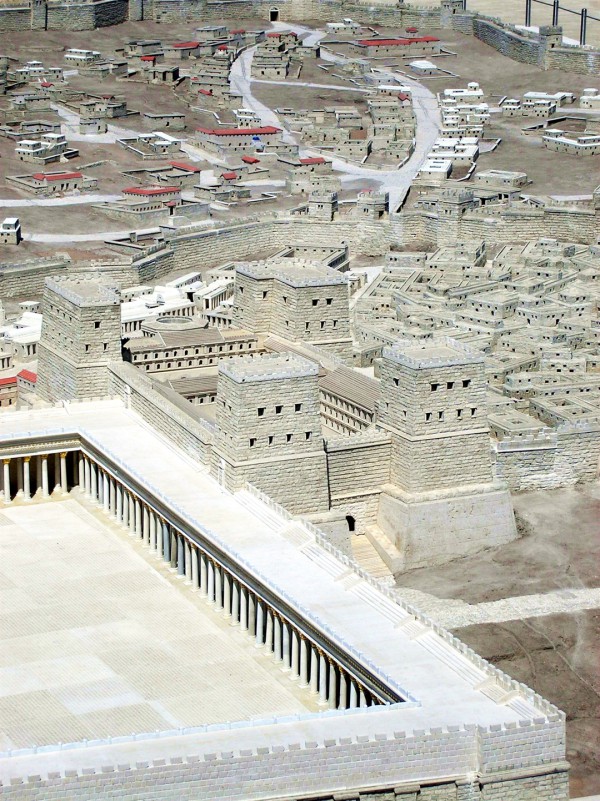 While this model of the Temple Mount and the Antonia Fortress depict the fortress as being attached to the Mount, it may have been attached by two 600-foot aerial bridges.   (Photo by Deror Avi)

“For if the Temple lay as a fortress over the city, Antonia dominated the Temple and the occupants of that post were the guards of all three,” Josephus wrote.

The illegal building at the fortress has been going on for two years, according to Barkai, who told Arutz Sheva, “I’m surprised that it’s just in the headlines now.”

Knesset member Yehuda Glick, a Temple advocate, said that he caught Waqf officials drilling through ancient stones at the Temple site with heavy machinery in 2014.  (JP)

“They saw me coming and immediately tried to hide.  It set off warning bells for me and I started filming straight away,” Glick said two years ago.  “They tried to hide, and then shouted to the policeman who was there that I could not take pictures without their permission.  The policeman ignored them.”

Yet, why did the policeman not intervene against the illegal demolition?

The Israeli agriculture minister gives us some insight to that answer:  “Illegal construction of the Muslim Waqf on an archaeological site near the Temple Mount is a very serious matter and we must not be content with serving writs, but with the realization of that writ via law enforcement.”

David Israel also asks:  “How come the [Prime Minister’s] office waited for two years to act, after being bombarded with complaints by archaeologists, including the Israel Antiquities Authority, regarding the irreparable damage caused by the Waqf?”

That answer awaits publication.  As Barkai laments, “Not enough stop-work orders” have been issued to counteract the damage that the Waqf has already done.”

As of now, the IAA’s complaints were incorporated into the municipality’s order against the building project last week Tuesday.