“On that day I will make Jerusalem a heavy stone for all the peoples.  All who lift it will surely hurt themselves.  And all the nations of the earth will gather against it.”  (Zechariah 12:3)

Mounting Jordanian protests against a bridge for non-Arabs to reach the Temple Mount has resulted in the Prime Minister’s Office (PMO) ordering the bridge be taken down. 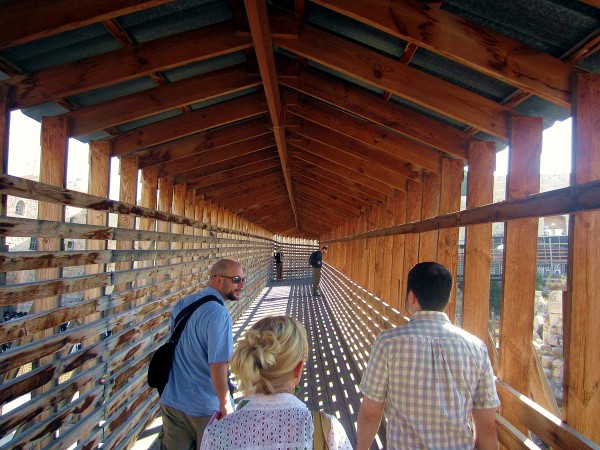 Non-Muslim visitors to the Temple Mount have only one point of access, a wooden bridge at the Western Wall Plaza.

The removal of the bridge, which was erected less than two-weeks ago by the Western Wall Heritage Foundation, began on Wednesday, the same day Israel closed a deal to supply Jordan with natural gas.  The deal is worth a healthy $15 billion, but a PMO official said the deal did not influence the Prime Minister’s decision.

“There was a structure built without proper authority; there is no real need for this structure,” a PMO official said.  “When the Jordanians approached us [with the request to take it down], we of course agreed.  There was no objective reason to have it there in [the] first place.  Everyone understands the sensitivity of the area and there’s no logical reason to add extra sources of friction.”  (Times of Israel)

“The decision was taken on its own merit,” he said.  “The peace treaty with Jordan, which we honor and respect, gives Jordanians a status on the Muslim holy sites.” 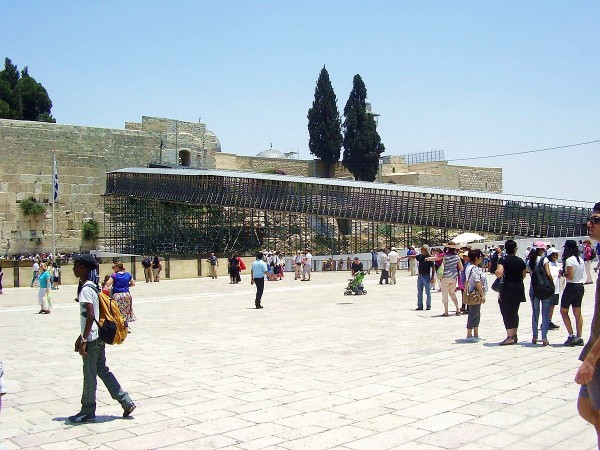 Built in 2007, the Mughrabi Bridge is a wooden bridge connecting the Western Wall plaza with the Mughrabi or Morocco Gate of the Temple Mount in Jerusalem.  It was built as a temporary structure until a proper bridge could be built to replace the earthen ramp that until 2004 allowed non-Muslim visitors direct access to the Temple Mount.

In 2004, following heavy rains and a light earthquake, an earthen ramp leading up to the gate collapsed, forcing Israeli authorities to replace it with a temporary wooden bridge pending construction of a more permanent stone structure. 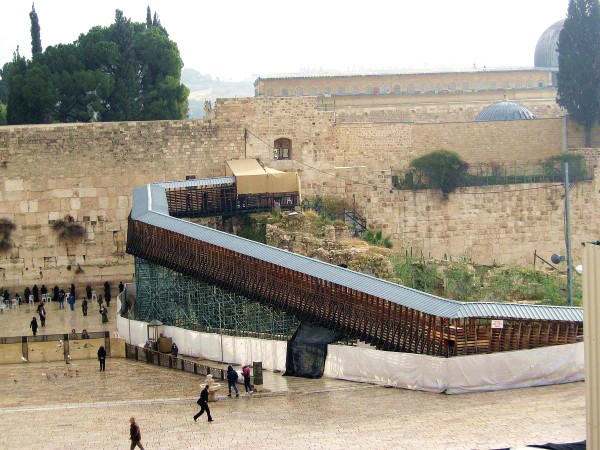 The Mughrabi Bridge was built in 2007 to replace an earthen ramp that collapsed due to heavy snowfall in 2004.

Construction of the temporary bridge and the archaeological activity underneath it are used as opportunities to bring spurious charges against the Israeli government that claim Israel is attempting to undermine the Temple Mount and destroy the mosques that exist there.  Plans to build the stone bridge, were all but abandoned due to violent protest and calls for a third intifada.

The temporary structure, called the Mughabi Bridge, was reinforced so that it could withstand long term use.  Archaeological activities underneath this wooden bridge have continued.

Now, the whole issue has boiled over after construction began on the second wooden bridge.  That bridge was being built underneath the existing bridge in order to replace it.

The problem is that authorization of this new wooden footbridge was apparently given by a local city official without the involvement of the Israeli government and proper coordination with the Jordanian government. 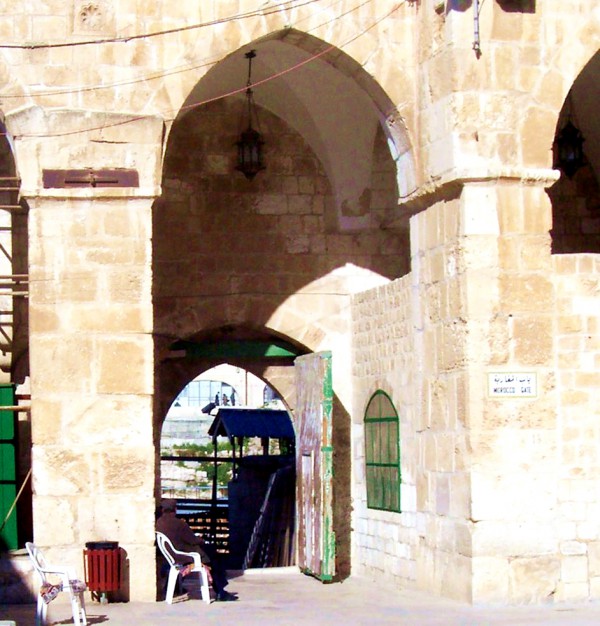 A view of the Morocco Gate from atop the Temple Mount.

When Jordan discovered the breach, it immediately brought pressure on Israel to remove the temporary replacement structure.  (HaAretz)

Meanwhile, Iran’s so-called “moderate” president Hassan Rouhani vowed Monday to free the Temple Mount from “Israeli occupation.”  This is his goal regardless of the fact that Jordan has been the administrator of Judaism’s holiest site through the Waqf Muslim trust since the 1967 War, a privilege granted by then Israeli Minister of Defense Moshe Dayan that has caused problems for Israel ever since.

“The administration of the Islamic Republic of Iran, like in the past, will use all tools at its disposal to save Al-Aqsa mosque and liberate the first Qibla (point of direction to which Muslims turn for prayers) of Muslims,” Rouhani stated.

For Rouhani to fulfill his “vow” it would be necessary for the Islamists to take control of East Jerusalem and the Temple Mount militarily (or politically), which is something that seems unlikely to happen in the near future.

Nevertheless, the Bible does predict that Jerusalem will become “a cup of trembling” and a “burdensome stone” for the World in the Last Days.  Arab issues concerning Jewish sovereignty and access to the Temple Mount are connected to the fulfillment of this key end-time Bible prophecy.