On Sunday, Prime Minister Benjamin Netanyahu told American Jewish leaders that while most moderate Arab nations see Israel as an ally, especially in light of the threat of Iran and Daesh (the Islamic State), they need to be encouraged to be more transparent about it.

“They all see the combination of these two threats and they see Israel as their ally, not as their enemy, in confronting these threats.  Now, this is something that is forging new ties, many of them discreet, some of them open,” Netanyahu said. “And I think there too we can expect and should expect and should ask to see a change.” 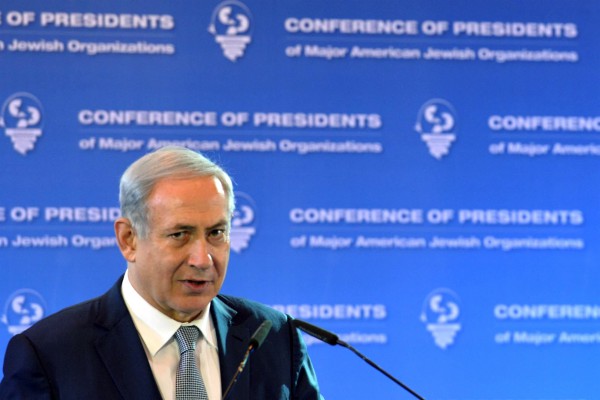 While it has been claimed that improved Israeli-Palestinian relations would lead to better Israel-Arab relations on a global scale, Netanyahu believes “it could actually be the other way around.  I think the better relations with the Arab world could help bring progress with the Palestinians.”

“I think that the encouragement of Arab states — leading Arab states — for a more realistic position on the part of the Palestinian Authority might contribute to a stabilizing situation and even advancing to a better future,” he said.

The prime minister went on to differentiate between the nations and international bodies that oppose Israel, and those that pursue business and entrepreneurial partnerships or diplomatic relations with the Jewish state.

Countries like India, China, Japan, and Russia are coming to Israel, Netanyahu said. “Scarcely a week goes by that we don’t have a delegation from one of these countries — of either political office-holders, or more and more, entrepreneurs, heads of companies.

“The same is happening in the nations of Africa and Latin America — virtually all of them — and they’re all coming here,” he added.  Netanyahu said one reason for this is the spread of terrorism via militant Islam; the nations are hoping to learn from Israel’s “military intelligence, special-service intelligence [and] operational experience,” he said.

“The second reason they’re coming here is because they want to embrace the future, and they see Israel as a thriving, dynamic economy that has fostered innovation, that has great capabilities,” he said, emphasizing that “technology” is the primary pull for these nations. 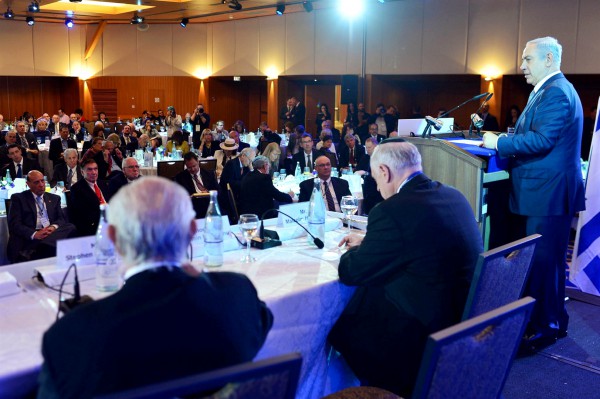 Prime Minister Benjamin Netanyahu told the leadership delegation at the Conference of Presidents of Major American Jewish Organizations that major Arab countries “are changing their view of Israel.”  (Prime Minister of Israel photo by Kobi Gideon)

The nations are drawn by Israel’s technology and defense know-how, including cyber security; land-management expertise in areas of water management, desalinization, recycling, agriculture, and biotechnology.

Netanyahu named, among the antagonists, the International Criminal Court, the European Union (“regrettably”), the United Nations, and specifically the Saudi-chaired UN Human Rights Council, for biased targeting of Israel, which he summarized as “ongoing multinational hostility.”

“I can’t believe there is such a term that is so self-contradictory,” he said of the Human Rights council’s supposed purpose, and added that “we’ve had some efforts to change at least the EU, but we know that in many of these multinational forums, Israel is singled out.”

Netanyahu said the world’s dictatorships are usually exempt from critique by these various international bodies, while democracies are assessed with a double standard, and “still a third standard for the democracy called Israel.”  (Arutz 7)