“Do not take away my soul along with sinners, my life with those who are bloodthirsty, in whose hands are wicked schemes, whose right hands are full of bribes.  I lead a blameless life; deliver me and be merciful to me.”  (Psalm 26:9–11)

Monday, November 23, was the United Nations’ annual Palestinian solidarity day, and as in past years, the UN ignored the Palestinian Authority’s terrorism and incitement, voting instead to approve a series of resolutions, six of which were drafted by the Palestinians and Syria condemning Israel.

As it did at the end of last year’s 69th session, the UN issued 20 resolutions against Israel and only one condemnation each to the Islamic Republic of Iran, the Syrian Arab Republic and the Democratic People’s Republic of Korea for human rights violations while failing to condemn gross human rights abuses by Russia, Saudi Arabia, Venezuela, China, Cuba, and many other nations. 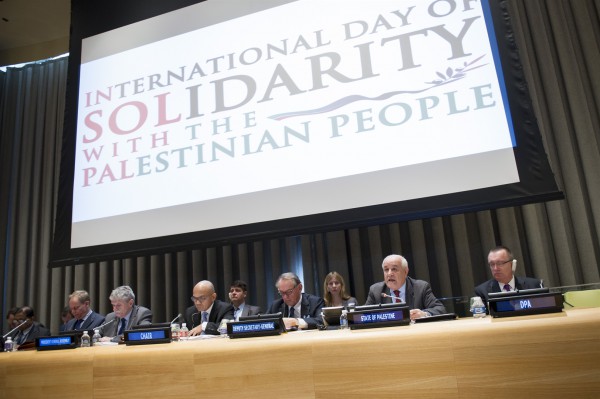 A view of the panel as Riyad H. Mansour (second from right), Permanent Observer of Palestine to the United Nations, addresses the special meeting in observance of the International Day of Solidarity with the Palestinian People.  (Photo by Rick Bajornas)

Among their incendiary assertions, one resolution (A/70/L.14) claims that Israel’s rule in Jerusalem is illegitimate, saying “that any actions taken by Israel, the occupying Power, to impose its laws, jurisdiction and administration on the Holy City of Jerusalem are illegal and therefore null and void and have no validity whatsoever” … and calls “upon Israel to immediately cease all such illegal and unilateral measures.”  This resolution passed 153 to 7, with 8 abstentions

Another resolution (A/C.4/70/L.16) “reaffirms the right of all persons displaced [in June 1967 and subsequent hostilities] to return to their home or former places of residence in the territories occupied by Israel since 1967.”  This resolution passed 157 to 7 with 6 abstentions.

None of the resolutions comment on the murderous attacks by Palestinian Arabs and Israeli Arabs against Jews and other Israelis that numbered 602 in October alone, according to Shin Bet (the Israel Security Agency), the most terrorist attacks against Israelis of any month in nine years.  These attacks included 483 firebombs, writes the Israel Ministry of Foreign Affairs.

The Israeli Defense Forces tallies 22 people killed and 203 wounded through November 29 in attacks targeting Israelis — including 80 stabbings, 29 shootings and 10 car rammings.  Fatah and Hamas statements have named these terror actions “heroic” and a “natural response to Israel’s crimes.” 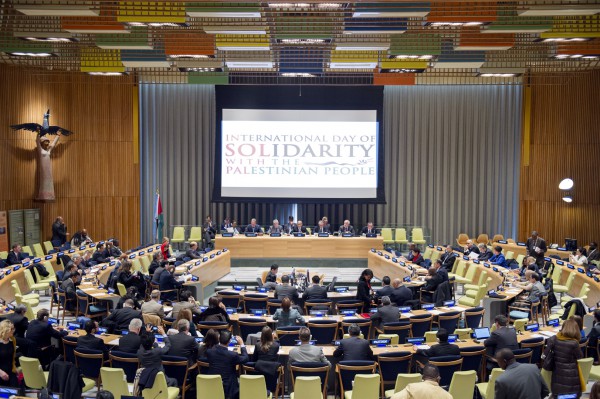 A wide view of the special meeting in observance of the International Day of Solidarity with the Palestinian People. (Photo by Rick Bajornas)

“Surreal barely captures the scene whereby the world is under assault by terrorists killing in the name of Islam and martyrhood — as Palestinians are doing while stabbing Israeli Jews — and the UN’s response is to reflexively condemn Israel in six separate resolutions, all of which are one-sided,” Neuer said.

In another surreal episode, we note that Saudi Arabia has “beheaded more people this year than ISIS,” yet was chosen in September by the UN to head a Human Rights Council panel that sets human-rights standards and reports international violations.  (Washington Post)

Despite the ongoing war in Syria, the UN also called for Israel to return territory to Syria that it captured in the Golan Heights in the 1967 Six Day War when Syria attacked Israel.  The resolution (A/70/L.17) passed by 105 to 6, with 56 abstentions.  Among those who voted in favor of this resolution was Turkey, who backs President Bashar Assad, and Saudi Arabia, who backs the rebel groups fighting Assad.  (Algemeiner)

“At a time when the Syrian regime is massacring its own people, how can the UN call for more people to be subject to Assad’s rule?” Neuer said, calling the resolution’s timing “morally galling and logically absurd,” and the UN oblivious to “the actual suffering on the ground, happening right now: hundreds of Palestinians slaughtered, maimed and expelled by Assad’s forces.“ 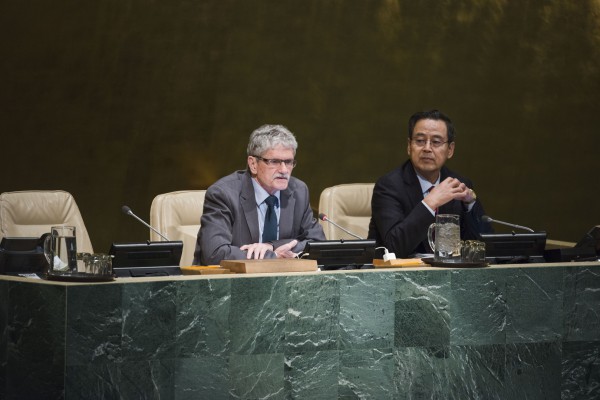 The General Assembly meets to consider draft resolutions and reports of the Secretary-General and of the Committee on the Exercise of the Inalienable Rights of the Palestinian People.  Mogens Lykketoft (left), President of the 70th session of the Assembly, chairs the meeting.  At his side is Zhang Saijin, Deputy Director of the General Assembly and Economic and Social Council (ECOSOC) Affairs Division.  (UN photo by Amanda Voisard)

Neither Assad nor the Islamic State were condemned by the UN, which chose instead to approve a resolution (A/C.4/70/L.15) “expressing grave concern at the especially difficult situation of the Palestine refugees under [Israeli] occupation, including with regard to their safety, well-being and socioeconomic living conditions.”

A similar resolution (A/C.4/70/L.17) claimed “extremely difficult socioeconomic conditions being faced by the Palestine refugees [including in Gaza] … as a result of the recurrent military operations, continuing prolonged Israeli closures, the construction of settlements and the wall, and the severe economic and movement restrictions that in effect amount to a blockade.”

No mention, of course, of Gaza’s ruling party, Hamas’ abuses against its own people; nor its $1 billion net worth, second only among terrorist organizations to the Islamic State; nor Israel’s daily humanitarian-aid transfer to Gaza in the realm of 700 aid trucks a day.

Defense Minister Moshe Ya’alon emphasized in June that “there is no humanitarian crisis in Gaza,” while alleged aid ships that were turned away by Israel from entering Gaza, such as the Marianne of Gothenburg, had “no aid on board” and were clearly “an act of delegitimization against us.”

“Today’s farce at the General Assembly underscores a simple fact: the UN’s automatic majority has no interest in truly helping Palestinians, nor in protecting anyone’s human rights; the goal of these ritual, one-sided condemnations remains the scapegoating of Israel,” Neuer said. 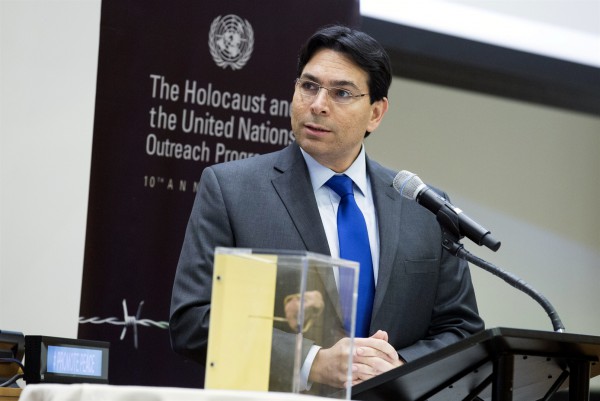 Danny Danon, Permanent Representative of Israel to the UN (Photo by Evan Schneider)

Yet another UN resolution (A/C.3/70/L.42) this past week condemned Israel’s security fence saying it “severely impedes the right of the Palestinian people to self-determination.”  That fence however successfully reduced suicide attacks against Israelis to nearly zero for many years.

“No amount of biased resolutions and empty symbols will bring the change that the people of the region so desperately need,” said Israeli Ambassador to the UN Danny Danon before the UN General Assembly on Monday.  (Times of Israel)

Danon showed images of the 20 Israeli victims of the current terror wave and said, “These terrorist attacks and killings are a direct result of incitement.  If the UN wants to play a constructive role, it must get a grip on reality, and hold the Palestinians accountable.”

“The UN’s disproportionate assault against the Jewish state undermines the institutional credibility of what is supposed to be an impartial international body, and exposes the sores of politicization and selectivity that eat away at its founding mission, eroding the UN Charter promise of equal treatment to all nations large and small,” Neuer said.

Nations that consistently voted no to each resolution were the US, Canada, Israel, Micronesia, Marshall Islands and Palau.