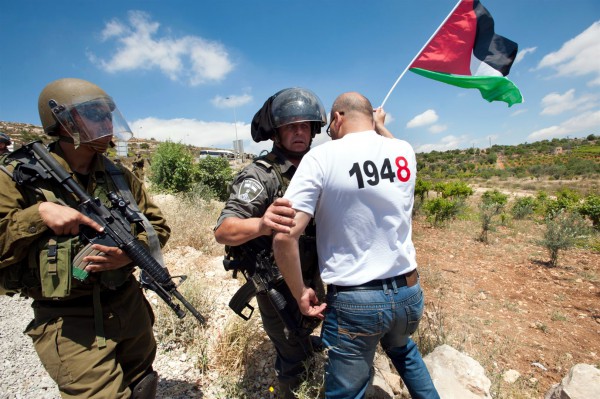 A Palestinian activist blocks an Israeli soldier as he endeavors to keep peace near the town of Husan in Judea and Samaria during Nakba Day protests in Israel.

“Do not be afraid, for I am with you; I will bring your children from the east and gather you from the west.  I will say to the north, ‘Give them up!’ and to the south, ‘Do not hold them back.’  Bring my sons from afar and my daughters from the ends of the earth.”  (Isaiah 43:5–6)

Last Thursday (May 15), two Arab youth died during the annual Nakba (catastrophe) protests that mourn the creation of the State of Israel in 1948.  Those protests included placing Israel’s Border Police in a life-threatening situation with Palestinians throwing rocks and firebombs at officers.

The deaths of the youth have been blamed on the Israel Defense Forces who were using rubber bullets to contain the violent demonstration from a hilltop 100 meters away.

The IDF is now navigating an international firestorm of criticism as Israel conducts a formal investigation into their deaths.

The Palestinian Liberation Organization’s Hanan Ashrawi has called the United Nations and the European Union to take severe action against Israel.

On Monday, the group Defense for Children International published edited security-camera footage that appears to show the fatal shooting of two young Palestinians during a protest in Beitunia, a West Bank town outside Ramallah.  Rifat Kassis, director of Defense for Children International, called on Israel to “conduct serious, impartial, and thorough investigations” into the situation.

“Such an incident will be investigated regardless of any demand,” responded Israel Foreign Minister Avigdor Liberman. 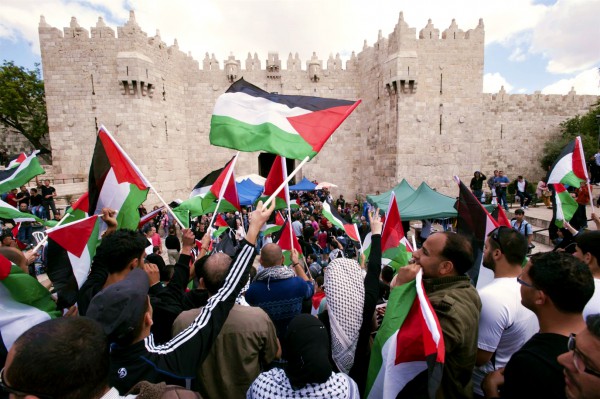 Palestinians commemorate Nakba Day at Damascus Gate in Jerusalem.  The day, which was inaugurated by Yasser Arafat in 1998, is often marked by speeches, rallies, and violence in Israel and the Gaza Strip.

The video, which does not include the violence of the protest or a source of gunfire, does feature the testimony of the video owner, Fakher Zayed, who installed several security cameras around his home and carpentry business.

“On Thursday, a violent and illegal disturbance took place at Beitunia,” an IDF spokesperson said.  “The video is edited in a self-serving manner and does not reflect the violence of the riot.”  (Israel National News)

Haaretz argues that the shooting took place “far away from the clashes and not in a direct confrontation with soldiers.”

The Anti-Defamation League also has scolded the international community on its rush to judgment, calling public comments on the incident “inappropriate and unwarranted.”  (JPost)

“The international community must respect the IDF’s right and responsibility to fully investigate this incident, and should refrain from rashly calling for extraordinary action before all the facts have been examined,” ADL Director Abraham Foxman told The Jerusalem Post.

Other commentators have noted antagonistic video editing, bullet paths inconsistent with where the IDF was positioned, and lack of blood as suspicious.

“It is curious that none of the people who ran to attend to the wounded seem at all concerned that there would be more shooting,” writes Jerusalem Post blogger Green-Lined.  “If it really was the IDF looking for an excuse to kill innocent bystanders, all of those that ran to aid the wounded would have been ideal targets, and should have at least felt vulnerable.”

The “Nakba” or “catastrophe” rally took place outside the Israeli Ofer Prison near Ramallah on the Gregorian calendar date marking Israel’s Independence Day.  Nakba Day mourns Israel’s declaration of independence as well as the flight of up to 650,000 Arab residents from their homes in the ensuing war.

At that time, during a renewed Arab effort to drive the Jewish People into the sea, Palestinians left Israel but were promised by their leaders that they could return to their homes when the Jews were defeated.  Because the Arab nations around Israel have refused to assimilate them into their countries, they still label themselves and their children as “refugees.”

“Various factors influenced their decision to seek safety in flight,” wrote the Economist in 1948.  “There is but little doubt that the most potent of the factors were the announcements made over the air by the Higher Arab Executive, urging the Arabs to quit.…  It was clearly intimated that those Arabs who remained in Haifa and accepted Jewish protection would be regarded as renegades.”  (Jewish Virtual Library)

Although greatly outnumbered and outflanked, the newly born nation miraculously triumphed over the onslaught.  The creation of the State of Israel is no reason to mourn, as it indicates that the Word of God is true and that God is faithful to His promises.

“Who has ever heard of such things?  Who has ever seen things like this?  Can a country be born in a day or a nation be brought forth in a moment?  Yet no sooner is Zion in labor than she gives birth to her children.”  (Isaiah 66:8)