On Friday, Palestinians in Gaza and Judea and Samaria commemorated the 67th “Nakba Day,” an annual day of remembrance of the establishment of the Jewish state.

Nakba is an Arabic word meaning “catastrophe” which is what they consider the establishment of Israel on May 14, 1948—a catastrophe.

This “Catastrophe Day,” inaugurated by Yasser Arafat in 1998, is part of a broad and multi-faceted Palestinian effort to delegitimize the existence of a Jewish state, making her seem like a fair target for attack.

A part of that delegitimization tactic is to portray Palestinians as the indigenous people of the land and depict them as innocent victims of the establishment of Jewish sovereignty.  Such a scenario depicts Israel as the occupier-aggressor and the local Arabs as the poor aboriginals oppressed by the occupying force.

Of course, this portrayal is designed to make the very creation of the state seem wrong.  The logical conclusion is that peace can come only when it is removed. 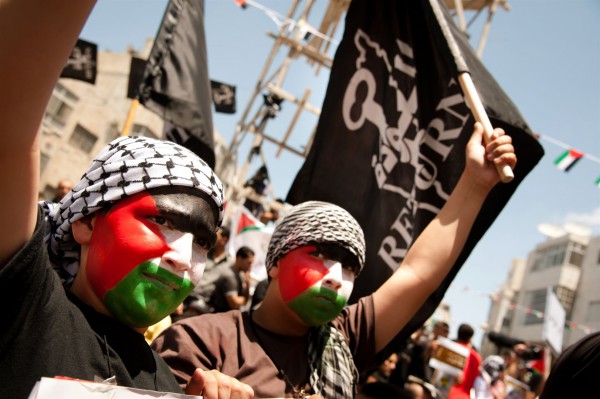 Palestinian boys march through the streets of Ramallah on Nakba Day, waving a banner with the word “Return” over the entire Land of Israel.  Their faces are painted with the Palestinian flag.

This reality is a symptom of the oppressive Palestinian regimes they live under.  Peaceful gatherings are banned.  What’s more, several people have died in detention.  In fact, last year, during the war with Israel, Hamas removed 16 prisoners from their cells and killed them in cold blood without due process of law.

According to an annual report by the Palestinian Independent Commission for Human Rights abuses, human rights in the Palestinian territories are currently at their “worst.”

The sad reality is that people are being tortured in Gaza and in the West Bank.

He said that contrary to the international perception, the Palestinians are suffering because of their own leadership.

“I want to see a Gazan spring against Hamas [who] is ruining daily lives in the coastal strip.”  He said in Jerusalem at the Shurat HaDin “Towards a New Law of War Conference.”  Gazans, he says, are “living in hell.” 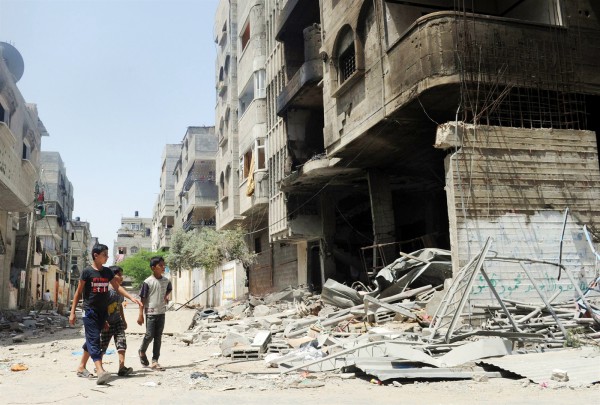 Three Palestinian youth inspect the remains of a house after it was hit in Israeli air strike in the Sheikh Radwan district.  (UN photo by Shareef Sarhan)

As an example of Hamas abuse, he said that Gazans are paid $50 to let Hamas build a tunnel under their homes.  They are given two choices:  be killed by Hamas or accept the money and have Israel potentially destroy their homes.

When Israel gave advance warning that it was coming to clear these tunnels, Hamas forced residents at gunpoint not to leave their homes, deliberately causing greater casualties to stir international sympathy.

He also explained that during last summer’s Operation Protective Edge, Hamas only allowed 50 Palestinians per day to go to the Erez crossing hospital (the field hospital set up by Israel).

Also, Eid pointed out that despite the intense suffering and deprivation Syria’s war has caused Palestinians living in Syria’s Yarmouk Refugee Camp in Damascus, there is little outrage because “if there are no Jews, there is no news.”

Israel’s treatment of Arab citizens stands in contrast to this.

Israel’s Deputy Ambassador to Norway, George Deek, who is an Israeli Arab, wants the world to know that Arabs are part and parcel of Israel’s cultural makeup; however, while multi-culturalism works in Israel, it is vanishing from the rest of the Middle East.

“Israel is important, not just for the Jewish world but also the Arab world.  While Muslims are being kicked out by each other, Israel is the only minority in the region which keeps hope alive for the Arab world.  As long as Israel exists, there is a chance we can move back from uniformity to diversity.”  (JC)