Violence included two shootings on Friday in Hebron as thousands of Jews took part in Shabbat Chayei Sarah, which marks Abraham’s purchase of the Tomb of the Patriarchs in Hebron.

The Shabbat’s Torah portion, Genesis 23:1–25:18, called “Life of Sarah,” actually begins with Sarah’s death and Abraham’s first land purchase after God’s promise to give him the land he had entered — a burial plot for Sarah that also came to house the bodies of Abraham, Isaac, Jacob, Rebecca and Leah.  It is the second holiest site of Judaism.

With 4,000 Israelis convened to celebrate the anniversary at the famous burial site, a shooter targeted the crowd, seriously wounding a 16-year-old boy in his upper body and lightly wounding an 18-year-old.  The younger victim’s condition improved over the weekend from “serious” to “moderate.”  (JP) 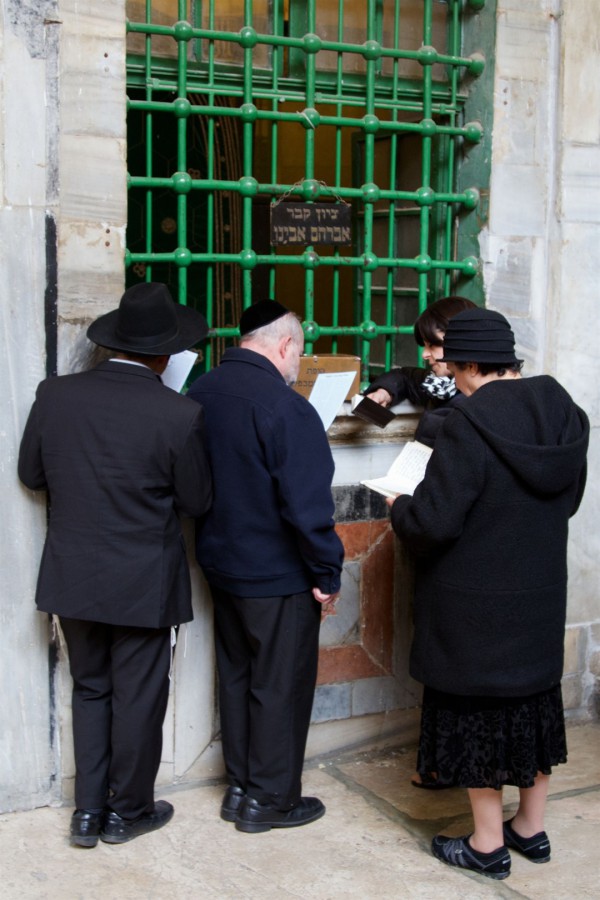 Jewish men and women pray at the Tomb of Abraham at the Cave of Machpelah.  (Photo by Nick Thompson)

Before the Shabbat began, international spokesman for the City of Hebron, Yishai Fleisher, promoted the tomb-visitation event, stating: “Israel has been hit by a plague of jihad, yet it continues to operate every day with optimism and resilience.”

The second shooting occurred north of Hebron, at the hand of a 16-year-old Arab from Bani Na’im.  He shot and seriously wounded an Israeli soldier with a hunting rifle, later admitting to the crime and relinquishing the weapon.

Sunday experienced another hike in Palestinian terror with three separate attacks on Israelis, injuring six, including a car ramming in which a 22-year-old Palestinian Arab man from Ramallah drove into three people waiting at a bus stop.

The terrorist drove directly into two men in their 20s, seriously injuring both, as well as a pregnant woman, who was injured lightly.  The men were stabilized after the attack, and medical personnel treated the pregnant woman as well as a second woman hit by shrapnel from the crash.

The ramming occurred just hours before 19-year-old border guard Binyamin Ya’akobovich succumbed to wounds from yet another ramming attack two weeks ago.

Later in the day, a 48-year-old Israeli commuter was attacked and stabbed multiple times while outside the Arab village of Nabi Ilyas in Judea-Samaria, near the Jewish-majority city of Alfei Mensahe.

According to reports, the Israeli man was sitting in his vehicle when the attack took place.  He had driven to shopping stalls situated outside the village to make a purchase when two terrorists attacked him, stabbing him in the stomach before running away.

Unable to keep the vehicle from swerving as he bled, the victim somehow managed to drive himself to the nearby Eliyahu checkpoint, where he received emergency medical aid from security guards.  (JPost)

“I’ve been stabbed.  I’ve been stabbed,” he said before passing out.  The man, who is on a respirator, is reported to be in critical condition at Meir Medical Center in Kfar Saba. 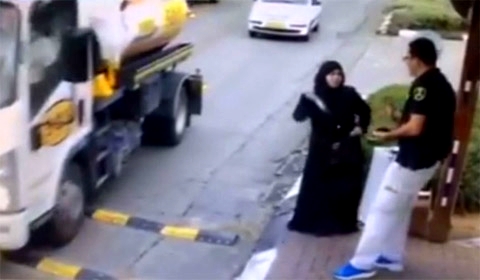 A Palestinian woman pulls a knife out of her purse to stab a security guard at the entrance to Beitar Illit. (MFA screen capture)

Earlier in the day, a 22-year-old Muslim woman from Bethlehem conversed with an Israeli guarding the town Betar Illit.  She waited until a pair of vehicles had driven by and the guard had looked away before she stabbed him with a large knife.

Because the guard saw her raise the knife and jumped backwards, he was hurt lightly.  Jerusalem Online writes that the guard then drew his weapon and shot the terrorist to subdue her, wounding her moderately; both the guard and the woman were treated by medics and evacuated to the hospital.

Mid-afternoon, two rock throwers struck buses near the Etzion Bloc in the central region and on a road near Kiryat Tivon, southeast of Haifa.

The windshield of the first bus was damaged and a windowpane of the second was shattered.  In the second incident, medics treated one 13-year-old girl passenger for shock, but no other injuries were reported.  (TOI)

Shortly thereafter, a 19-year-old Palestinian Arab was arrested near the Tomb of the Patriarchs in Hebron after security guards found a knife in his bag.  The teen denied knowing how the knife entered his bag.  At Rachel’s Tomb, in the early evening, some of the 100 participants in a violent protest threw a Molotov cocktail and an improvised grenade at security guards; no one was hurt.