A Week of Terror in the Holy Land

“Whoever sheds the blood of man, by man shall his blood be shed, for God made man in his own image.”  (Genesis 9:6)

Tension in Israel has increased as the up close and personal Palestinian wave of terror against Jewish Israelis continues, leaving many to wonder when or if the violence will stop.

Since our last report on the beginning of a terror wave, continued attacks have shaken the Israeli community.

So-called “lone wolf attacks” have become so frequent that Jerusalem major Nir Barkat has urged all adults who own a licensed gun to carry a weapon with them throughout their daily activities, noting that quite often terrorists are stopped or killed by civilians or former Israel Defense Force (IDF) soldiers when police are not available.

On October 7, for example, a woman entered the Old City and stabbed a man who then shot her with his handgun, critically wounding her.

Tuesday morning in Ra’anana, north of Tel Aviv, an Arab from eastern Jerusalem stabbed a 32-year-old man at a bus stop, while a second attacker victimized four—leaving one in serious condition.

In another major attack in the southern-Jerusalem neighborhood of Armon HaNatziv, a Palestinian terrorist seized the driver’s seat of an Egged bus while his partner targeted passengers, killing three and wounding nine others.

One of the two 23-year-old terrorists, Jabel Mukaber, is a Hamas operative who was imprisoned in 2013-2014 for terror activities.

In his car-ramming attack, Abu Jamal critically wounded a second 40-year-old and moderately wounded a 35-year-old with gunfire; medics treated eight people, including five for shock.

Several rock-throwing attacks extended into the late hours of Tuesday evening demolishing bus windows and injuring one 42-year-old driver.  Rocks used for such attacks are no small pebbles; they can measure a foot or more in length. 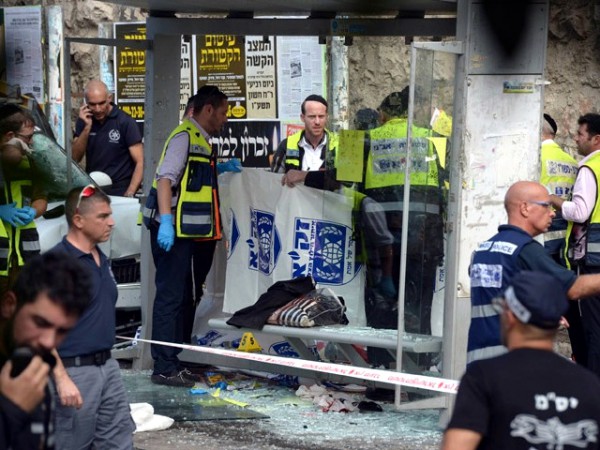 Up until recently, tourists and residents could walk freely at all hours of the day and night in relative safety.  While that is still possible in some areas, the real threat of a third intifada is at hand, with increasingly frequent random Palestinian violence throughout Jerusalem and Israel.

Sadly, the reality is that each of us must be more alert and on guard for ourselves and each other as we go about our day in the Holy Land.  Can you imagine having to live like this?

The following are some of the heinous attacks from last week:

October 4: Jerusalem — Moshe Malka, 15, was stabbed by a Palestinian terrorist. “I thank God I was saved,” Malka said while recovering in the hospital.  “I survived through a miracle.  If my friend had not sprayed him with tear gas, he would have continued to stab me.”

October 7: Petach Tikva — A Hebron Palestinian stabbed several shoppers at the mall, critically injuring one.
Gush Etzion — An Arab mob stoned the car of a 38-year-old woman and tried to drag her from her car.
Jerusalem — An 18-year-old Palestinian woman stabbed a 36-year-old Jewish man at the Old City.
Kiryat Gat — A Palestinian terrorist stabbed an IDF soldier, stole his gun, then forced himself into the home of a woman coming home with groceries.  She managed to escape. 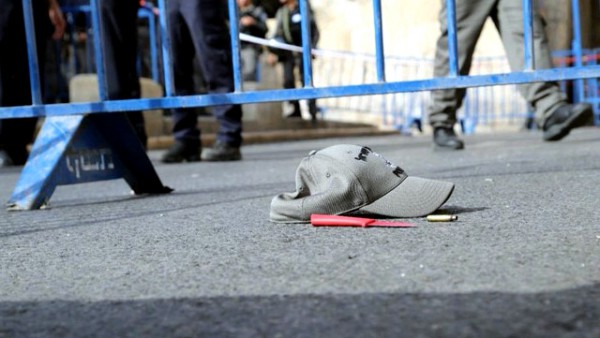 The knife used in the October 12 stabbing at the Lion’s Gate entrance to the Old City.  (Israel Police photo)

October 10: Jerusalem — A 16-year-old Arab stabbed two Jewish men, both in their 60s; the terrorist then attacked Border Police officers before being fatally wounded in response.  Also in Jerusalem, a 19-year-old Palestinian from Shuafat stabbed two police officers and stone throwers injured a bus driver.
Gush Etzion — Stone throwers hit the car of a 53-year-old woman, who was lightly injured by the broken glass. 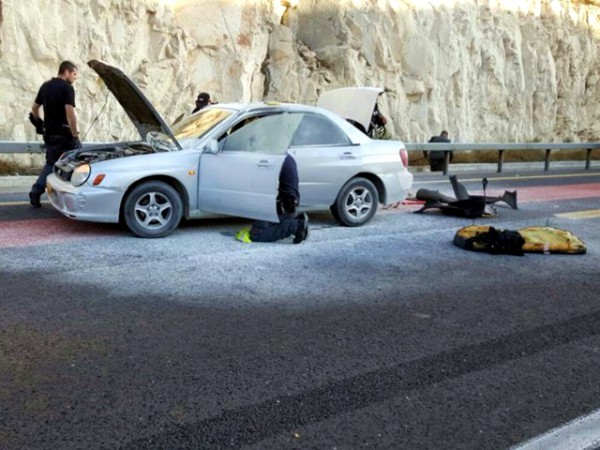 On October 11, a terrorist near the checkpoint between Maale Adumim and Jerusalem detonated a bomb in her car after she was stopped by a police officer who noticed suspicious behavior.  (Israel Police photo)

October 11: Jerusalem highway — A police officer who pulled over a suspicious-acting driver was injured when the female driver set of explosives, setting gas canisters on fire.
Tzomet Alon — A 20-year-old terrorist from Umm el-Fahm in Israel rammed into a bus station, injuring a 19-year-old female soldier, still in critical condition, a 15-year-old girl moderately, and two men, aged 45 and 20.

October 12: Jerusalem — An 18-year-old who lives in eastern Jerusalem attempted a stabbing attack before being shot and killed; and in Ammunition Hill, a 16-year-old female stabbed a border policeman.

Also on October 12, in Jerusalem’s Pisgat Ze’ev, two Palestinian teenagers, aged 13 and 17, stabbed a 13-year-old Jewish boy riding his bicycle; the 13-year-old Arab attacker stabbed the Jewish boy multiple times before a driver knocked into him with his car.

The 17-year-old stabbed a nearby 24-year-old Jewish man before being shot by police; the younger attacker was apprehended and his victim remains in critical condition.  Later in the evening, a terrorist on a bus stabbed a 19-year-old soldier. 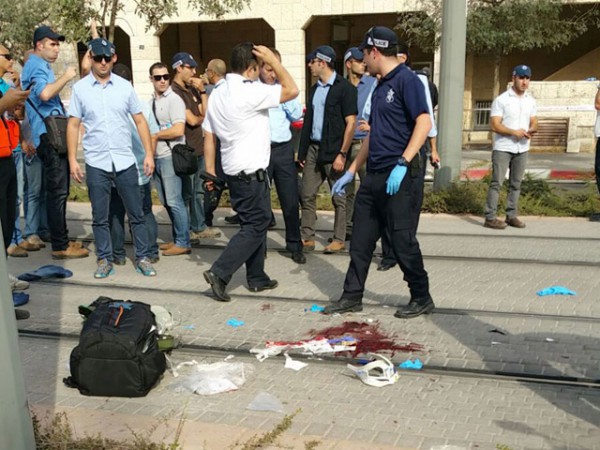 Palestinian riots in Gaza have also spilled into Israel as dozens of Palestinian infiltrators cross the border; and in the last week, gunfire from Gaza targeted a pair of Israeli cars driving too close to the border.

Yesterday, Zionist Union Knesset Member Yoel Hasson asked the Israeli Cabinet to deploy the Israeli Defense Force in Israel’s city centers—a defense tactic that has not been used since the 1967 Six Day War, writes Times of Israel.  Approving the suggestion Tuesday evening, the government released a decision to grow the number of IDF troops in the centers.

While the world has been largely silent about the unprovoked attacks by Palestinians on Israeli civilians, the United States condemned “in the strongest terms” Tuesday’s Palestinian terror activity against Israelis.  The condemnation comes after two weeks of lethal attacks targeting Jews and Israelis. The attacks have increased in severity and number.

“We mourn any loss of innocent life, Israeli or Palestinian.  We continue to stress the importance of condemning violence and combating incitement,” the State Department said.  “We are in regular contact with the Israeli government and the Palestinian Authority.  We remain deeply concerned about escalating tensions and urge all sides to take affirmative steps to restore calm ….”

Meanwhile, United Nations Chief Ban Ki-moon, ignoring the terrorism itself, said Tuesday he was troubled by “the apparent excessive use of force by Israeli security forces.”

Arab League Chief Nabil Elaraby asked the international community to give “protection” to the Palestinians, claiming Israel is practicing “terrorism” against them.

The Israeli Foreign Ministry on Tuesday condemned the Palestinian-refugee agency UNRWA whose spokesman Chris Gunness lamented the deaths of the Palestinian perpetrators of the terror attacks, while “ignoring completely and absurdly the wave of Palestinian terrorism and attacks on Israeli civilians.”

The European Union’s ambassador to Israel Lars Faaborg-Andersen, however, did condemn the terror attacks riddling Jerusalem.

“My thoughts are with the families of three more victims of terrorism and the many injured,” Faaborg-Andersen stated.  “These attacks not only cause human suffering, they undermine the trust ordinary citizens feel for passers-by in the street, let alone the trust people need as communities if there is to be any prospect for peace.”