“I will give to you and to your descendants after you, the land of your sojournings, all the land of Canaan, for an everlasting possession; and I will be their God.”  (Genesis 17:8)

A Washington Institute poll across Gaza taken near the start of the current conflict between Israel and Gaza revealed that 70 percent of Gazans are unhappy with the Hamas security forces and administration.

A great majority of 450 respondents were unhappy with the level of crime (71%), corruption (64%), and unauthorized militias (47%) in their neighborhoods.  A large majority (78%) classified “presence of Palestinian militias that are not organized under the formal security structure” as at least a “moderate” problem.

Most favored the Palestinian Authority (PA) taking over Gaza.  About 88% of Gazans agree or strongly agree that they want the Abbas administration that governs the West Bank and which favors a two-state solution, to also govern Gaza.

In terms of a long-term solution of peace with Israel, only 30% favored a two-state solution, while a majority favored reclaiming all of “Palestine.”  About 10% wanted a bi-national state. 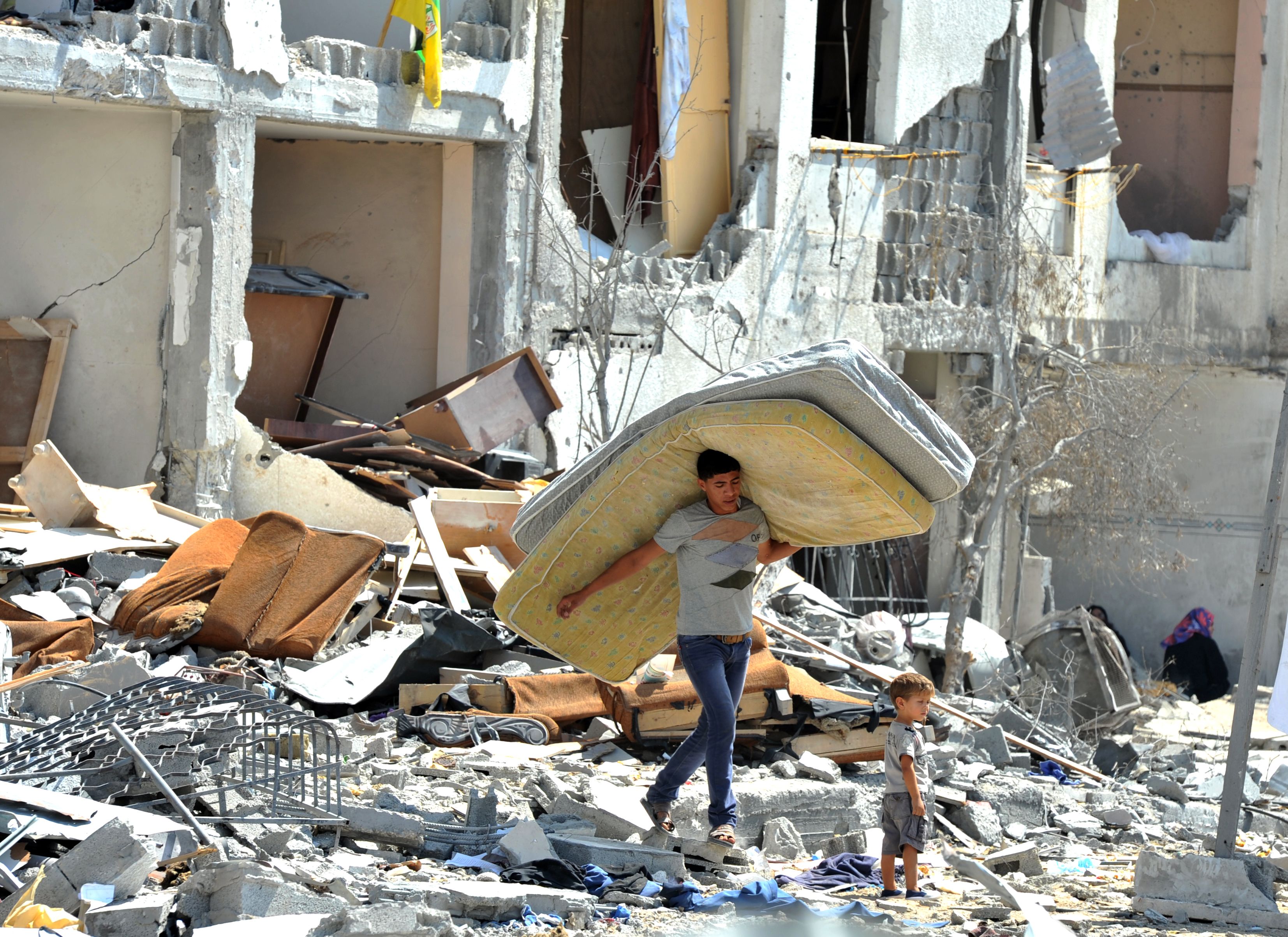 A Palestinian searches through rubble of his destroyed home in Towers Al-andaa in the northern Gaza Strip.

In a more recent survey conducted by the Interdisciplinary Center Herzliya on Palestinian attitudes towards Operation Protective Edge, 92% of Gazans said they are in favor a long-term ceasefire between Israel and Hamas.  That poll suggested that 72% of Gaza Palestinians hope their leaders will work to achieve a lasting peace agreement with Israel.

Still, these statistics do not mean that Palestinians like Israel.

“The Palestinians look at Hamas as a true liberating organization … a hero,” says Mideast expert Brigitte Gabriel in a July 31 radio interview with Dr. Michael Brown.  “The Palestinians hate Israel much more than they hate Hamas.”

Gazans overwhelmingly elected the internationally recognized terrorist organization Hamas in 2006 to lead them after suicide bombings and other terrorist activities inside Israel successfully drove Israeli settlements out of the strip in 2005.

However, today, the unfavorable living conditions have led Gazans to favor the more moderate nonviolent tactics of the Palestinian Authority (PA) in their battle to eliminate Israel.

Moreover, most Palestinians view a two-solution, which is supported by the PA leadership, only as a stepping stone to liberating all of historic Palestine at a later time.

This desire is ingrained into them throughout childhood even apparently in United Nations funded schools:

While working toward their goal of eliminating Israel, 73 percent of Gazans say Palestinians should employ “nonviolent popular resistance against the occupation.”  They see protests, marches, boycotts, and other social actions as having a much more positive impact on world opinion.

Even if such a peaceful approach is truly desired by the moderate majority of Gazans, Gabriel points out that the moderate opinion of the majority is historically irrelevant.

For instance, it took only 19 radical Muslims to take down the World Trade Center and “bring the US to its knees.”

And radical Muslims have a lot of support.  Nearby nations such as Iran, Lebanon, Qatar, Turkey, and Saudi Arabia financially support radical terrorist activities through Hamas, al-Qaeda, Hezbollah and other groups.  They share the same goal as the moderate Palestinian people, but through violent, radical jihad.

Whether moderate or radical, the goal of both Muslim factions is the same—take all of historic Palestine from the river to the Sea.

Nevertheless, the Bible states plainly that it was Jacob, whose name was changed to Israel, as well as Jacob’s descendants, who would inherit the Promised Land.

“So Isaac called for Jacob and blessed him. … ‘May God Almighty bless you and make you fruitful and increase your numbers until you become a community of peoples.  May He give you and your descendants the blessing given to Abraham, so that you may take possession of the land where you now reside as a foreigner, the land God gave to Abraham.’”  (Genesis 28:1–4)