A rare Israeli coin minted during the fourth year of the Great Revolt of AD 66–70 is being auctioned at Winner’s Auction house in Jerusalem, the country’s leading auction house.

The Hebrew silver shekel is estimated to sell as high as $32,000.  (Winner’s Auction)

This 2000 year-old silver shekel minted in the fourth and last year of the Great Revolt against Rome (AD 70) is being auctioned at Winner’s Auctions house in Jerusalem with a certificate of authenticity.  (Photo courtesy Winner’s Auctions)

On the front of this coin is the letter shin (ש), which is an abbreviation for shana or year, along with the number 4.  Hebrew script around the coin reads  “Israel shekel” and surrounds a ceremonial wine goblet such as those used in the Temple ceremonies.

Hebrew script on the reverse side spells out “Holy Jerusalem” surrounding the image of a branch containing three pomegranates, an image used on modern day Israeli coins, which is believed to reflect the agricultural abundance prevailing in the Land.

The weight of the coin is 13.55 grams and its diameter is 22 millimeters (a little less than an inch).

The Jewish rebels minted coins as an act of defiance to assert their independence from Rome.  It is believed that as many as 10,000 coins were minted during the revolt with rousing slogans, such as “for the freedom or redemption of Zion,” which is written on the shekel from the second year of the revolt. 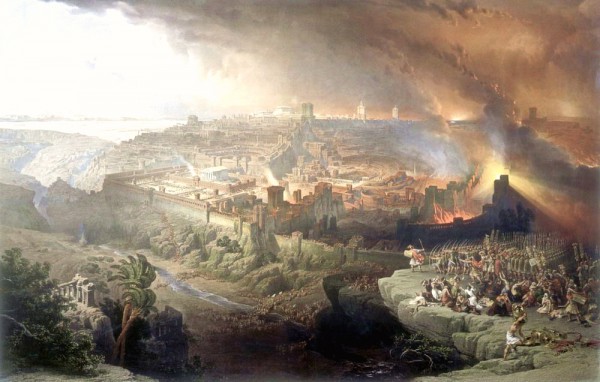 The Siege and Destruction of Jerusalem by the Romans Under the Command of Titus, A.D. 70, by David Roberts

A coin from year four of the revolt is considered to be extremely rare, with only a few known to be in existence.  This is in part because the Roman legions were already approaching Jerusalem in the fourth year of the rebellion and silver was in short supply, especially since from the tenth of Tevet (about January) of that year, the Romans had placed Jerusalem under siege.  (Israel National News)

Jews not only fought Romans during the Revolt, they also fought various factions among each other, further weakening the spiritual and physical strength of the resistance, leading to the Roman siege of Jerusalem and the destruction of the Temple in AD 70.

A second revolt rose up sixty years later, led by Simon Bar Kokhba, whom many at the time considered to be the Messiah.  But instead of ushering in the final redemption of Israel, his rebellion resulted in the elimination of Israel as a Jewish state, until 1948 when Israel once again became a sovereign nation.