“About Zebulun he said: ‘Rejoice, Zebulun, in your going out, … they will feast on the abundance of the seas, on the treasures hidden in the sand.’”  (Deuteronomy 33:18–19)

The most extensive underwater find in 30 years was recently discovered by a pair of friends from Ra’anana, Israel, while diving in the ancient port of Caesarea.  The ancient shipwreck, which was found just before Passover, has lain at the bottom of the harbor for some 1,600 years.

Ran Feinstein and Ofer Ra’anan salvaged a few pieces of the stunningly preserved remnants of lost cargo and reported their discovery to the Israel Antiquities Authority (IAA), a requirement by Israeli law.  According to Times of Israel, the pair then conducted a joint dive with experts from the IAA, who found the seabed had shifted, giving a glimpse of the shipwreck. 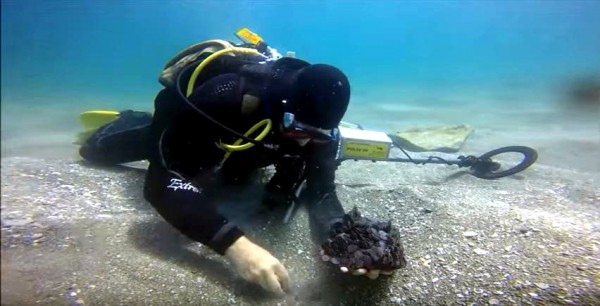 An Israeli diver discovers a mass of coins in the sand.  (YouTube capture)

The IAA salvage team cleared more sand away and discovered among other items 20 kilograms (about 44 lbs) of coins, melded together in the shape of the clay jar that had contained them.

The salvage expedition also turned up several Roman antiquities, including animal-shaped objects, such as a bronze faucet shaped like a boar with a swan on its head, a figurine of the Roman moon goddess Luna, and remains of three life-size bronze cast statues.

“In the many marine excavations that have been carried out in Caesarea, only [a] very small number of bronze statues have been found; whereas in the current cargo, a wealth of spectacular statues were found that were in the city and were removed from it by way of sea,” the IAA states.  “The sand protected the statues; consequently, they are in an amazing state of preservation — as though they were cast yesterday rather than 1,600 years ago.”

The IAA has dated the wrecked vessel to the Late Roman period (about AD 250–450) when Rome had begun to shift from polytheism to the new Christianity.  The polytheistic representations in the wrecked vessel’s hoard do not obviously carry this Christian influence or any sense of Jewish cultural influence. 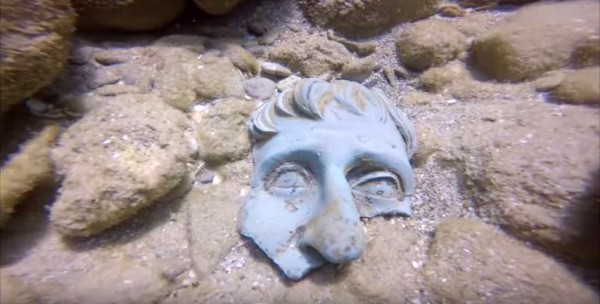 The shipwreck also contained the remains of two lamps, one bearing the image of the Roman sun god Sol and the other bearing an image of an African slave.  Jar fragments were also found, which the IAA suggests were used for carrying drinking water for the travelers.

Salvaged objects connected to the ship include items used in constructing and sailing the vessel, as well as iron anchors.

Archaeologists have determined that the ship hit the rocks and seawall off the Caesarea coast, suggesting that the sailors had unsuccessfully cast the anchors to ground the ship.  The storm likely pulled them toward the shore.

“A preliminary study of the iron anchors suggests there was an attempt to stop the drifting vessel before it reached shore by casting anchors into the sea; however, these broke — evidence of the power of the waves and the wind which the ship was caught up in,” said the IAA in a statement.

Feinstein and Ra’anan will receive a tour of their finds in the antiquities storeroom as well as a Certificate of Appreciation for reporting their discovery.