“Why does the wicked man revile God?  Why does he say to himself, ‘He won’t call me to account’?  But you, God, see the trouble of the afflicted; you consider their grief and take it in hand.  The victims commit themselves to you; you are the helper of the fatherless.”  (Psalm 10:13–14)

The two shooters were 21-year-old Palestinian Arab cousins, Khalid and Muhammad Muhamra, from Yatta, the biblical town of Jutta south of Hebron.  Choosing to break their dawn-to-dusk Ramadan fast at the indoor Max Brenner Chocolate Bar, they placed their orders for dessert, stood up, and fired homemade Carlo Gustav semi-automatic rifles at the patrons sitting at nearby tables.

One of the two shooters threw down his jammed pistol and joined the melee of confusion.  He ran from the cafe, taking refuge in the house of an off-duty police officer where he silently drank water at the officer’s kitchen table with the policeman’s wife.  Thinking the man was just a confused bystander, the officer ran back to the crime scene to help.

Meanwhile, nearby on Ha’arba’ah Street behind the Sarona Market, the other shooter was tracked by a private security guard named Avishai, who had identified the terrorist by his firearm.  After Avishai replaced a jammed cartridge in his weapon, he fired into the terrorist’s abdomen.

When the off-duty officer saw the shooter detained by police, he realized that his suit matched that of the man who had taken refuge in his home.  The officer ran back home and arrested the second terrorist, who was taken by Israeli forces for interrogation.  Meanwhile, the wounded terrorist was taken to Ichilov Hospital in Tel Aviv for treatment. 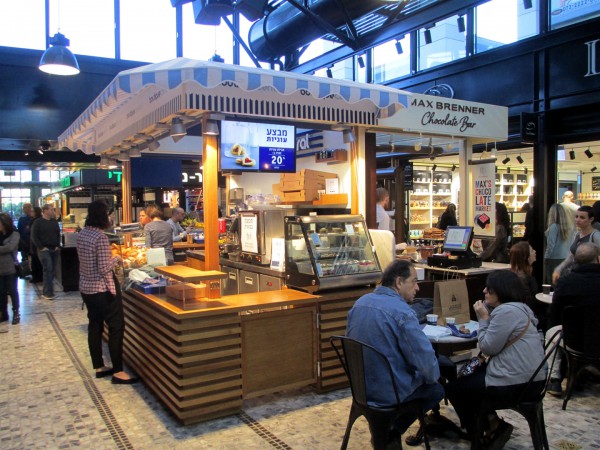 During the cousins’ attack, four were shot and killed, while several other victims sustained non-fatal bullet wounds, three of whom required critical care treatment at Ichilov Hospital.  The four victims killed by the terrorist are Dr. Michael Feige, 58; Ilana Naveh, 39; Mila Mishayev, 32; and Ido Ben-Ari, 41, whose wife sustained injuries.

Fiege, a father of three, was a professor of Israeli studies at Ben-Gurion University of the Negev, where he “devoted his career to the effects of war and terrorism on the Israeli psyche,” according to The Israel Project.

Naveh, a mother of four, was out celebrating her 40th birthday.

Mishayev, who was waiting for her fiancé at Max Brenner, managed to call him before she died.

Ben-Ari, a father of two, worked in a senior position at The Coca-Cola Company’s Israel branch.

Israeli Prime Minister Benjamin Netanyahu stopped in at the scene of the terror attack shortly after the shooters were apprehended and later, again, on Thursday, announcing the arrest of a third suspect in the crime.

“We have conducted raids in Yatta and have caught the third Palestinian, who was an accomplice in the attack,” he said Thursday.  “We have restricted work permits for members of their family, and created a buffer zone around Tel Aviv.”

As well on Thursday, Israel Defense Forces confiscated explosive device elements, bullets, and two drill presses, the kind used to make street guns like the “Carlo”; they were found in two Arab towns near Jerusalem.  (Times of Israel)

On June 28, work will begin on closing the security wall breaches that allowed the cousins to bypass standard security checkpoints.

“I know personally the pain their families feel.  We stand with them and wish the injured a speedy recovery,” Netanyahu said.  “This nation is strong and they [terrorists and proponents of terrorism] will not stop us.” 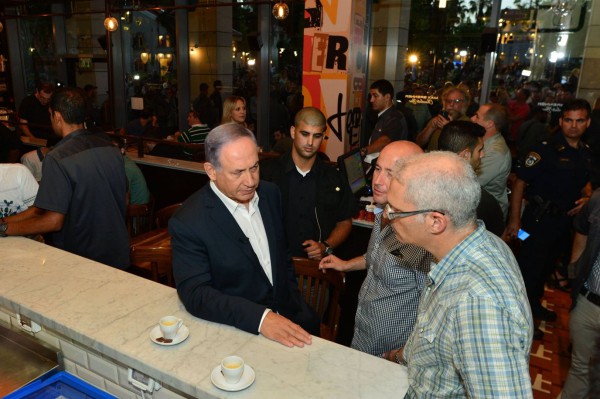 Hamas spokesman Sami Abu Zuhri, without offering specific examples, said, “The Tel Aviv operation is a natural response to Israeli desecration of the al-Aqsa Mosque and the crimes against the Palestinian people.”  (TOI)

Fatah, the political party of Palestinian Authority chairman Mahmoud Abbas, also issued a statement, saying, “The operation in Tel Aviv was a natural and spontaneous reaction by single individuals to the option of force that Israel has chosen.”

But in reality, a joint investigation by the Shin Bet (Israeli Secret Service), IDF, and Border Police reveal that these murders took careful planning and coordination.

The men purchased their handmade weapons from an intermediary in Yatta, their hometown.  Assisted by the third suspect now in custody, they entered Israel proper through a breach in the security barrier.  Assisted by another Palestinian working illegally in Israel, they traveled to the Bedouin town of Segev Shalom, southeast of Beersheba where they changed into suits and ties.  Taking two taxis that would cost over $100, they arrived at Tel Aviv to conclude their plan.  (Times of Israel) 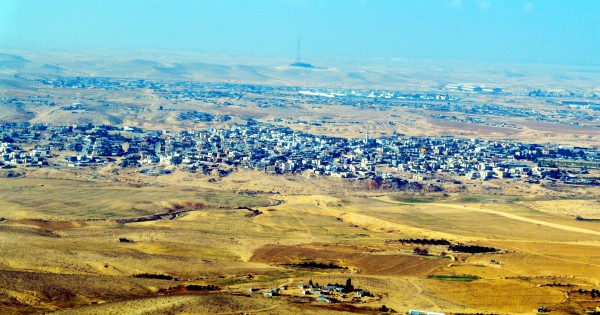 Segev Shalom (Shaqib al-Salam) is a Bedouin town and a local council in the South District of Israel, southeast of Beersheba.  (Photo by Amos Meron)

The attack dashed hope that the current wave of violence had finally ended.  Although this was the first lethal attack in three months, it is the first of the Muslim month of Ramadan, which is usually accompanied by acts of violence.

And it reflects how deeply embedded violence is in the heart of Palestinians.

Violence is encouraged through education and praised by leadership.  Indeed, Hamas head Ismail Haniyeh praised the attackers, calling them “heroes.”

“Glory to the heroes, mercy on their souls,” he tweeted.  (Haaretz)

This new style of attack by Palestinians appearing to be Israel’s most pious can only leave the public suspicious that anyone, even an Orthodox Jew seated next to them at a restaurant, may be the next terrorist.  Nevertheless, life has returned to normal, but a sadder normal. 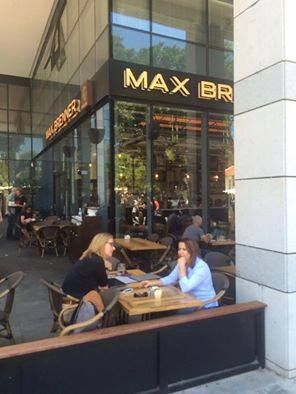 Knesset members Tzipi Livni and Shelly Yachimovich sit down to lunch at Sarona Market the day after the shooting.

On Thursday, many Israeli civilians and officials came to the site of the shooting, including members of the Australian embassy.

On Twitter, Neuer wrote, “The meeting was scheduled several days ago; I insisted we make the point of not canceling it.  Terrorist groups seek to destroy the normal life of free society; we defy them by embracing life.”

Recognizing the spontaneous tribute put together on Thursday by dozens of Israelis, UN Watch director Hillel Neuer stated that “it was inspiring at Sarona to see so many young Israelis who came to pay their respects to the victims, to light candles, bring bouquets of flowers, and sing songs of peace.”

“So long as Palestinians teach their children to murder Jews, and so long as their hatred is legitimized by UN bodies like UNRWA [United Nations Relief and Works Agency] and the UNHRC [United Nations Human Rights Council], terrorism will never stop,” he adds.

“Yet so long as Israeli society can raise a generation of young men and women like those I saw today — and embrace the values of life, peace, tolerance, education, science, culture, spirituality, innovation, and creativity — the children of light will prevail.” 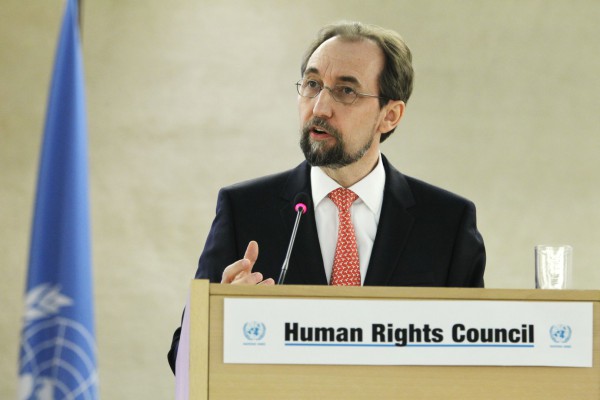 In his official response, the United Nations High Commissioner for Human Rights, Zeid Ra’ad Zeid Al-Hussein would not call Wednesday’s tragedy a terrorist attack but stated being “deeply concerned at the response of the Israeli authorities, which includes measures that may amount to prohibited collective punishment and will only increase the sense of injustice and frustration felt by Palestinians in this very tense time.”  (UNWatch)

The US asked that Israel show restraint in their response, which included closure of Yatta; cancellation of work permits for relatives of the assailants, and revoking travel permits for tens of thousands of Palestinians during Ramadan.

Meanwhile, Hamas has blamed the Tel Aviv attack on alleged Israeli “violations” at the al-Aqsa mosque and the “occupation” which are false and continue to be false, yet have been a trigger of Arab incitement-to-terror many times.

The true motivation behind the violence is not to obtain peace with Israel — but to prevent it — as Al-Jazeera TV journalist Salma al-Jamal (@aljamasalma) revealed on Twitter, “The Ramadan operation that took place today is the best answer to stories we have been hearing about ‘peace process’ that some people are trying in vain to revive.  #Praise_Carlo (the gun in the attack).”

Linda Dayan, sat next to a large window inside Benedict at Sarona Market on the night of the murders and saw the mayhem ensue.  Four feet from her window, the gunman with fire blazing out of his rifle, ran past.  She posted her own account of the shooting and the Palestinian response on Facebook, saying, “I saw that they’re handing out candies in Hebron.  I’m scared to read the American headlines, or any news at all.”

“I’m thinking about all the ‘devil’s advocates’ I’ve known, the— ‘They have no other venues for protest’ camp, the— ‘It’s justifiable in a conflict like this’ college students I shared desks with,” Dayan writes in her public Facebook post.   “Please consider: … if the shooters came into the restaurant, if one had turned slightly to the left and fired, I would be dead right now.”

“Call out terror for what it is,” Dayan pleads.  “Call men shooting at screaming civilians who are running for their lives terrorism.  Tell the people you know that it’s never okay to target innocent men, women, and children, even if you don’t like where they live.”

“Stand up to anyone who says my life isn’t worth it.  Because when they say it, I’ve learned, they mean it.”

On the other hand, Dayan declares, “I’m alive.  I’m alive.  The world is beautiful, and I’m alive.”