“Because you harbored an ancient hostility and delivered the Israelites over to the sword at the time of their calamity, the time their punishment reached its climax, therefore as surely as I live, declares the Sovereign Lord, I will give you over to bloodshed and it will pursue you.  Since you did not hate bloodshed, bloodshed will pursue you.”  (Ezekiel 35:5–6)

Gaza continues to brainwash its children to become future jihadists and terrorists.

At a recent kindergarten graduation ceremony in the Zeitun neighborhood of Gaza City, children performed a play for parents and teachers that involved shooting an Israeli soldier to death, raiding an Israeli outpost to kidnap another soldier, planting a bomb under a tank, and rolling out fuse wire.

Elaborate props included a mortar launcher and 2-D automatic weapons, which the children carried while in military formation.

The children were dressed in full uniform of the Islamic Jihad, including camouflage clothes, helmets, and backpacks. 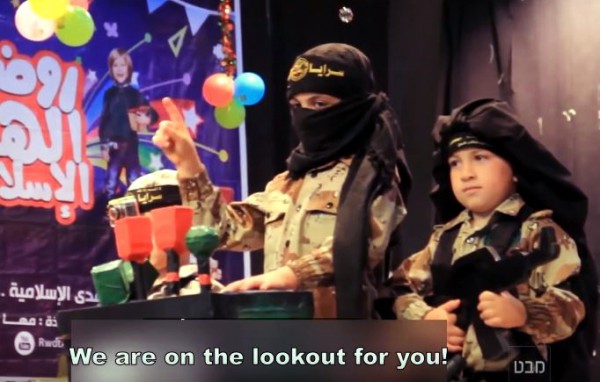 In one scene, a group of “jihadis” break down the door of an Israeli outpost, and a pair of pupils detain an Israeli, taking him away.  The group’s young leader, wearing a Go Pro camera on his head, films the raid, as offstage, adults record the results of what were likely weeks or months of practice.

Following the play, Islamic Jihad leader in Gaza, Khader Habib, gave a short speech to the audience:  “This show sends a message of love.  Our children dream to live like the rest of the world’s children,” Habib stated.  “We are telling the Zionist enemy:  We do not want to kill anyone, we are not terrorists nor murderers.  Leave our lands and return it to its owners, do not oblige us to kill you.”  (JPost)

The Zeitun play is not the first time Gazan children have been exposed to or trained in murder, kidnapping, terror, and hatred for people whom they are taught are “occupiers.”

According to Elior Levy of Ynet, “performances and displays of a military purpose” have been documented in the past at Gaza’s end-of-the-school-year events; however, such a show, accompanied by advanced pyrotechnics and such cruel acts as mock killing by children in elementary school, has not been documented until now. 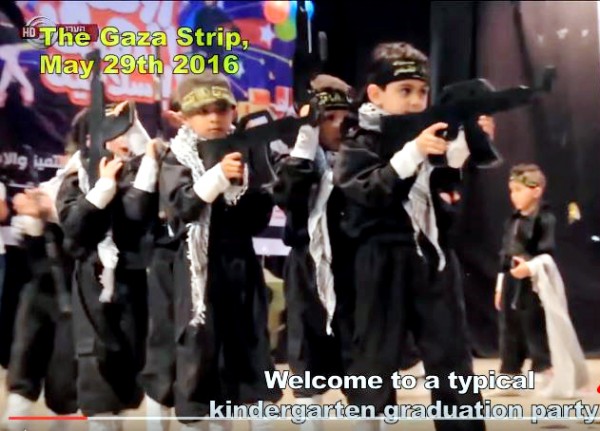 The Islamic Jihad is not alone in training up children in the ways of war, hatred, and murder.  Another Gaza-based terror group, Hamas — and the Palestinian Authority itself — will soon rotate Gaza’s children through its disturbing “summer camps” designed to teach children sharp shooting, bomb making, and kidnapping techniques.  (Observer)

Last year, Gatestone Institute reported that “more than 500 Hamas members of Hamas’s armed wing, Ezaddin al-Qassam, [are] supervising the military training and religious education in the camps to train future jihadis in the war against Israel.”

“Hamas’s religious education is aimed at teaching the children about Islam and its sharia laws.  They are also being taught that making peace with the ‘infidels’ is prohibited under the teachings of Islam,” says Gatestone.

Over 25,000 attended the summer camps last year, whose goal is to “prepare a new generation of Palestinian youths spiritually, mentally, and physically for the battle to liberate Palestine,” states an Arabic news site.  (rassd)

For the majority of Palestinians, “to liberate Palestine” means to capture all the land from the Jordan River to the Mediterranean Sea.