“Can anyone understand the spreading of the clouds, the thunderings of his pavilion?”  (Job 36:29)

Israelis woke up last week Tuesday under the cover of a massive sandstorm.  The cloud of yellow dust impacted visibility reducing it to only one to three kilometers (.5–2 miles).

Extremely warm, muggy weather exceeding 100 degrees Fahrenheit accompanied the early September phenomenon in such places as Tiberias on the Sea of Galilee.

And what was the culprit?  Apparently the sandstorm had been inching in from Iraq and Syria where it has been swirling for several days.

“It is not clear what caused the exceptional sandstorms in Syria,” Israel Meteorological Service Climate Department head Dr. Amos Porat said on Wednesday.  “They did have some weather activity and strong winds, but not on a scale that can account for what happened.  We are trying to find an explanation.” (JPost)

The air quality and visibility was so poor that domestic airlines Israir and Arkia canceled flights to the southern city of Eilat.  Ticket holders were offered transportation by bus.

Israel’s Environmental Protection Ministry warned residents to stay inside and to avoid outdoor physical activity.  The Magen David Adom (Israel’s version of the Red Cross) reported that over 600 Israelis were treated for shortness of breath and other respiratory problems exacerbated by the weather.  (BIN)

The pollution level in Jerusalem was the highest in the country—173 times its normal amount with 5,000–7,000 micrograms of dust particles per cubic meter—the worst level ever in the 75 years of record keeping.

A satellite photo taken from 497 miles in space shows Israel, the Sinai, Jordan, Lebanon and Syria covered in a brownish-yellow fog.  The data indicate that the dust rose to a level of 2,000 feet.  (Times of Israel) 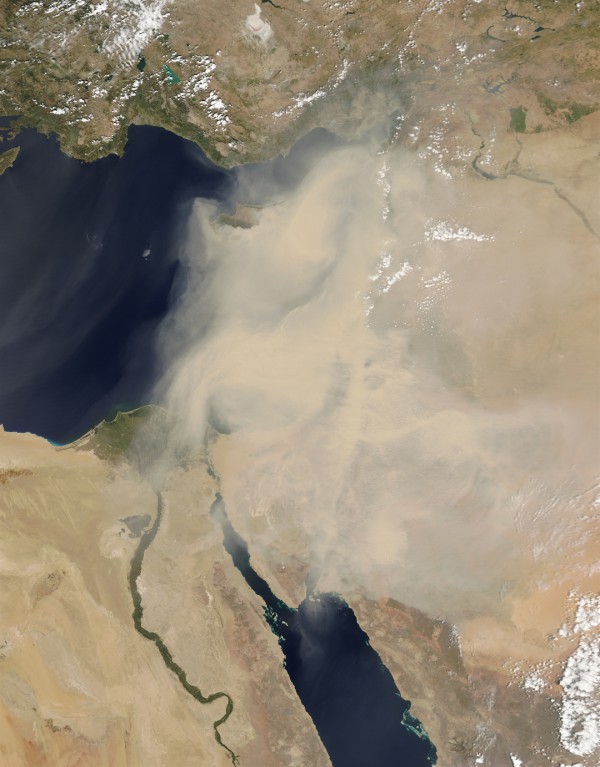 NASA satellite image of a major dust storm in September 2015 that enveloped heavily populated areas in the Middle East and North Africa, including Israel.

The sandstorm is reported to have caused several deaths in Syria and grounded President Assad’s air force.  In Egypt, four ports on the Suez Canal were closed due to poor visibility.

Hebrew University’s Professor Daniel Rosenfeld, an expert on climate change, noted the rarity of such a storm, commenting, “I don’t remember a time when such a large quantity of dust arrived from the direction of Syria, all without powerful winds.  The major dust storms usually arrive at the end of winter from North Africa, and are accompanied by strong winds.”

Noting that scientists are still at a loss to explain what has happened, Rosenfeld suggests that it might be linked to a change in farming practices in Syria since the beginning of the civil war there.  (Haaretz)

Some wonder if God might be saying something to Syria and to Israel, which has decided it cannot absorb any of Syria’s refugees due to the country’s small size.

“Israel is a small country, a very small country, that lacks demographic and geographic depth; therefore, we must control our borders, against both illegal migrants and terrorism,” Netanyahu told ministers at his weekly Cabinet meeting in Jerusalem.  (Arutz Sheva)

Looking to the Bible for answers, we see that in ancient Israel, a great sandstorm is one of the curses that would befall Israel for not obeying God’s commandments (Deuteronomy 28:24).

That sandstorm would result in Israel’s destruction.

In contrast, last week’s anomaly, which is still working its way out, merely resulted in major inconveniences and the nation of Israel united again under a cloud.