“This is what the Sovereign Lord says to the mountains and hills, to the ravines and valleys, to the desolate ruins and the deserted towns that have been plundered and ridiculed by the rest of the nations around you — this is what the Sovereign Lord says: In my burning zeal I have spoken against the rest of the nations, and against all Edom, for with glee and with malice in their hearts they made my land their own possession so that they might plunder its pastureland.” (Ezekiel 36:4-5)

Fair Housing laws in civilized, democratic nations seek to create peaceful coexistence regardless of race, nationality, gender, or disability, yet the reality is that a Muslim-ruled Palestinian Authority (PA) never intends to coexist with Jewish people.

This truth has once again come to the forefront through a renewed Arab campaign that slaps a long-standing verdict of “treason” with additional punishments upon any person who sells housing or land to Jews. 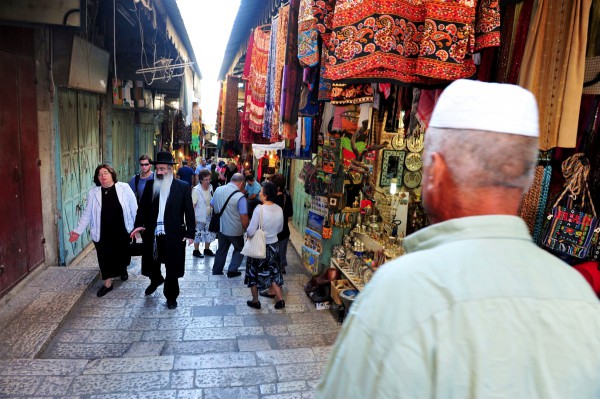 Christians, Arabs, and Jews in a Jerusalem market

The Jerusalem-based Palestinian National Work Commission anti-Jew-dealing campaign was announced at a public press conference last week and has since been disseminated by various Arabic-media outlets.

“We call for additional measures to renounce and besiege the brokers and weak people among Palestinians in Jerusalem,” the statement reads.   “We call for a total boycott of these people on all levels — social and economic — and to refrain from dealing with them in trade or purchases or sales.”

Revealing its severe strategy for dealing with those who might want to coexist with Jews, the statement also called the Muslim and Arab populations to make them objects of scorn in their communities and refrain from “participating in their joys and sorrows and any religious, national or cultural event.”

“The land dealers should know that they would not be able to avoid earthly and life punishment.”  The campaign would deny them marriage and burial rights, as well:  “Not only will they not be buried in Islamic cemeteries, but their entire families will also be punished, and it would be forbidden to marry or to deal in any way with their family members.”  (Gatestone Institute) 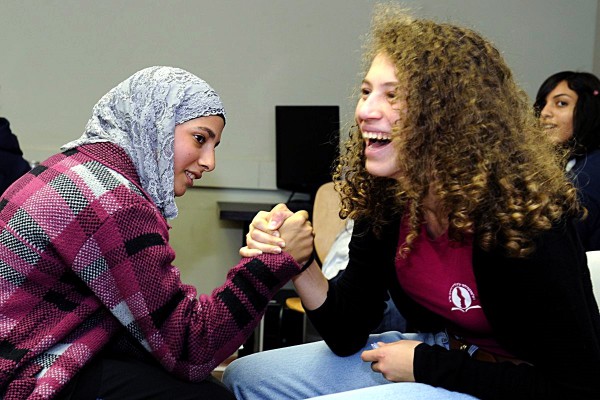 Of course, this is nothing new.  The Palestine Liberation Organization Penal Code cites housing sales to Israelis as treason, punishable up to life in prison and even death.  But there is more.

In 1998, Amnesty International reported systematic, extrajudicial torture of Palestinians who sold to Jews:

“Torture of those accused of “collaboration” with Israel or selling land to Israelis appeared to be systematic. … Unlawful killings, including possible extrajudicial executions, continued to occur.  Three land-dealers were found dead during May after the Minister of Justice, Freih Abu Middein, announced that the Palestinian Authority would begin applying a Jordanian law which provided for the death penalty for those convicted of selling land to Jews. There were fears that statements by the Minister of Justice and the failure to condemn the killings appeared to constitute permission to security services to carry out extrajudicial executions with impunity.”

In addition, on October 21, 2014, PA Chairman Mahmoud Abbas stated that a punishment of hard labor would be added to life sentences upon those who would “rent, sell or facilitate real-estate transactions with citizens of ‘hostile countries’.”  (Wafa)

Abbas’ ruling in 2014 paralleled Arab riots against new Jewish homeowners in the Jerusalem neighborhood of Kfar Shiloach, which is known as “Silwan” in Arabic, where a Jewish-owned building is found in the Yemenite Village.

That village was established by Yemenite Jews who immigrated to the Promised Land in the 1880s.

Within hours of the new homeowners moving in, the Arab rioters attacked the building with petrol bombs and flares in an attempt to run the Jews out of town. (Arutz Sheva) 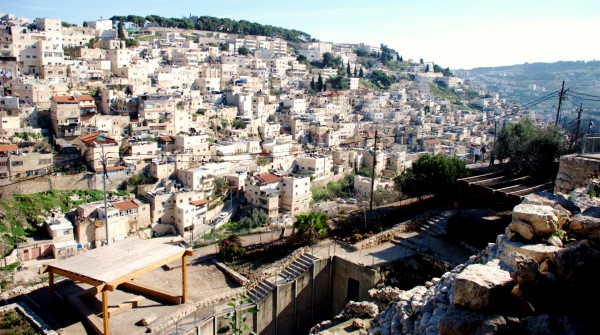 The efforts of Jewish people to move into legally purchased properties in the predominately Arab Silwan area of Jerusalem has been met with hostility and violence. (Photo by Ian McKellar)

This Jewish desire to dwell peacefully among Arabs is considered by Arabs to be “Judaizing” Jerusalem and, thus, this campaign by the National Work Commission activists to stop the practice has been renewed.

The PA’s discrimination based on race and nationality, however, does not seem to apply to the rest of the world.  Speaking to the European Union parliament on Thursday, Abbas expressed admiration “for the democratic model you have constructed in a diversity of cultures and languages and different governments.  For us this is a mirror that reflects great civilization, great culture.”  (EU Plenary Session translation)

Nevertheless, for years Abbas has been denying that Israel neither as a civilization nor as a culture has any claim to the land of Jerusalem.  And in 2000, he even claimed that a Jewish Temple never existed on the Temple Mount.  But “if it had,” Abbas has stated that Israeli offenses have canceled out any claim Jews might have had to the holy site.

What are these offenses?  In a September 16, 2015 video posted on the official website of Abbas, he explains that “the al-Aqsa is ours.  The Church of the Holy Sepulchre is ours, and they [the Jews] have no right to defile them with their filthy feet. … We will do everything in our power to protect Jerusalem.”  (Palwatch)