“But I tell you, love your enemies and pray for those who persecute you.” (Matthew 5:44)

Only one week after Hamas rockets cease to fall over Israel, the two-week-old daughter of an officer in the Palestinian Authority was successfully treated in Israel and given a new chance at life.

Fajar, who is from the Gaza Strip, needed open-heart surgery which she received at Holon’s Wolfson Medical Center on Tuesday with the help of the Save a Child’s Heart (SACH) organization.

Even while “Operation Protective Edge” continued in the Gaza Strip, doctors in Israel continued to treat and save children and others from the Strip in Israeli hospitals.

Fajar was brought to the hospital with a congenital life-threatening heart ailment even as the fighting raged.

Last year, her two-year-old sister, Zachra, was treated for a different heart condition in the same hospital.

Zachra will be returning to the hospital this week for further evaluation and additional surgery.

The surgery was performed by Dr. Lior Sasson together with a Palestinian doctor, Dr. Addas, and an Ethiopian doctor, Dr. Mekonnen, both of whom are taking part in the SACH training program.

In the bed near Fajar in the Pediatric intensive care unit is Rumaisa, a Palestinian child who was brought to Wolfson when she was nine-days-old.  She also received surgical treatment and is recovering well.  (JPost) 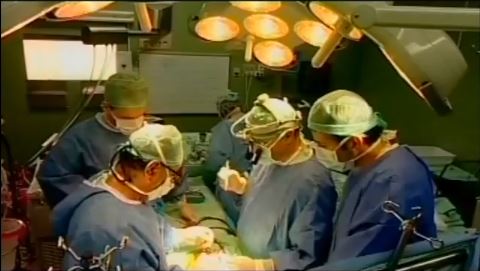 During an earlier ceasefire in the Gaza Strip grandmother Haniyah Sha’er from Khan Younis in southern Gaza brought her two-year-old granddaughter Hala Aradha to Wolfson for treatment.  Hala had received surgery earlier and was being brought for a follow-up examination.

Other of Haniyah’s grandchildren were not so fortunate with one dying in an Israeli shelling and another receiving life-threatening burns.

Over 300 children from the Palestinian territories and other countries receive treatment each year through SACH which has provided care for over 3,000 mostly from Africa and the Arab Middle East.  (Times of Israel)

The medical staff includes 12 doctors and nurses from the Palestinian Authority, Ethiopia, Tanzania and Romania, all part of a SACH training program.  (JPost)