“Say to the Levites: ‘When you present the best part, it will be reckoned to you as the product of the threshing floor or the winepress.  You and your households may eat the rest of it anywhere, for it is your wages for your work at the tent of meeting.‘”  (Numbers 18:30–31)

This past Wednesday, Israeli archaeologists announced that they found an ancient manor with its own bathhouse and white-mosaic wine press while clearing the grounds of central Jerusalem’s Schneller Compound, an Israeli military base vacated in 2008.

Excavation director for the Israel Antiquities Authority (IAA) Alexander Wiegmann theorizes that the house was “a Roman manor that continued to function in the Byzantine era.”

The IAA described the winery of the manor as having eight cells installed around the pressing surface that “were used for storing the grapes, and possibly also for blending the must (literally young wine, it is actually grape juice that contains the skins, seeds, and stems of the grapes) with other ingredients, thereby producing different flavors of wine.”

“In the center of [the press] is a pit in which a press screw was anchored that aided in extracting the maximum amount of must from the grapes,” the IAA added.  The IAA has theorized that the residents of the manor house made a living through wine production. 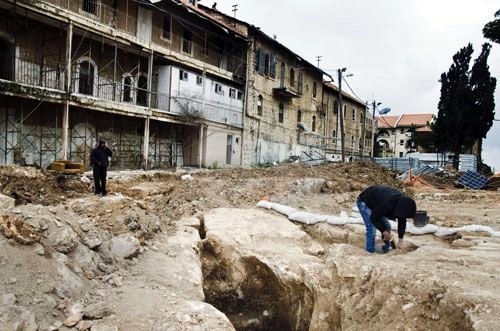 Archaeology at the Schneller Complex.  (Photo by IAA)

Private bathhouses, such as the one found at Schneller, were a customary part of Roman estates, noted to feature a tepidarium (warm bath), a frigidarium (cold bath) and a caldarium (hot bath).

According to an article posted by the Ministry of Foreign Affairs (MFA), the Schneller bathhouse featured bricks stamped with the name of the Tenth Roman Legion.

“This legion was one of four Roman legions that participated in the conquest of Jewish Jerusalem, and its units remained garrisoned in the city until c. 300 CE,” the article states.

Soldiers from the legion would retire to Jerusalem after 70 CE, when the Jewish capital was converted to a Roman city and renamed Aelia Capitolina.

Prior to Roman occupation, the Schneller site housed a Jewish settlement whose remains, discovered last year, were dated to the Late Second Temple period.

In its most recent excavation, the IAA discovered remnants of terra cotta pipes at the Schneller bathhouse, which would have funneled hot air from a furnace throughout the bathhouse.

“Once again, Jerusalem demonstrates that wherever one turns over a stone, ancient artifacts will be found related to the city’s glorious past,” said Wiegmann.

“The archaeological finds discovered here help paint a living, vibrant and dynamic picture of Jerusalem as it was in ancient times up until the modern era,” he said.  (MFA) 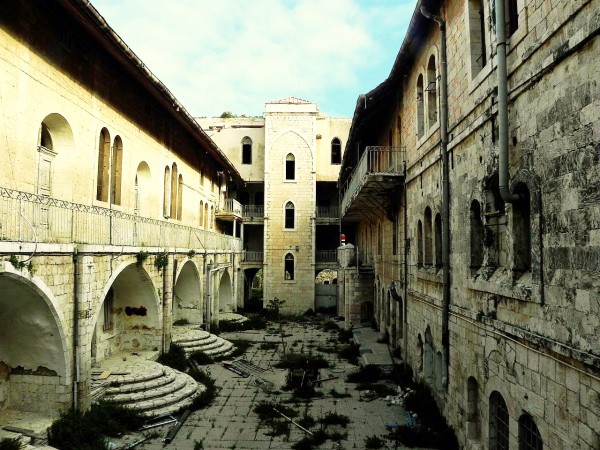 Schneller Orphanage (Syrian Orphanage) in Jerusalem, Israel was subsequently used by the Royal Army and then the Israel Defense Forces, until it was closed in 2008.  (Photo by Shosh Sharet)

The Schneller site’s history features the 1860 establishment of the Schneller Orphanage by German missionaries.  The orphanage operated until the Second World War after which England assumed control of the Holy Land and expelled the Germans.

During the British Mandate, the orphanage became a British military base called the Schneller Compound.  In 1948, the base transferred into the hands of the Zionist military group Haganah, who used it for the same purpose.

After the Haganah “was dissolved and became the national army of the state” — the Israel Defense Forces (IDF) — the Schneller compound officially became an IDF base.  (Britannica)

After 2008, the Schneller base closed and lay dormant before being bought by a housing developer five years later.  The site is now being repurposed into a residential estate named Merom Yerushalayim for ultra-orthodox Jews.  Developed among 17,000 square meters (4.2 acres) of lush greenery with spectacular city views, It is being promoted as “countryside living in the heart of Jerusalem.”

Jerusalem District archaeologist Amit Re’em said the Schneller dig was “an excellent example of many years of cooperation and deep and close ties with the Haredi [Ultra-Orthodox] community.”

“The Israel Antiquities Authority is working to instill our ancient cultural heritage in this population, as it does with other sectors,” Re’em said.