Found: Second Temple Era Stairs in the City of David

“Remember the nation you purchased long ago, the people of your inheritance, whom you redeemed—Mount Zion, where you dwelt.  Turn your steps toward these everlasting ruins, all this destruction the enemy has brought on the sanctuary.”  (Psalm 74:2–3)

A pyramidal stack of Second Temple era stairs was found in the City of David National Park along an ancient road leading to the Temple, convincing some archaeologists that the structure was used as a podium to address pilgrims on their way to the Holy House.

“It would be very interesting to know what was said there 2,000 years ago,” said dig directors Nahshon Szanton and Dr. Joe Uziel in a press release.

“Were messages announced here on behalf of the government?  Perhaps news or gossip, or admonitions and street preaching—unfortunately, we do not know.” 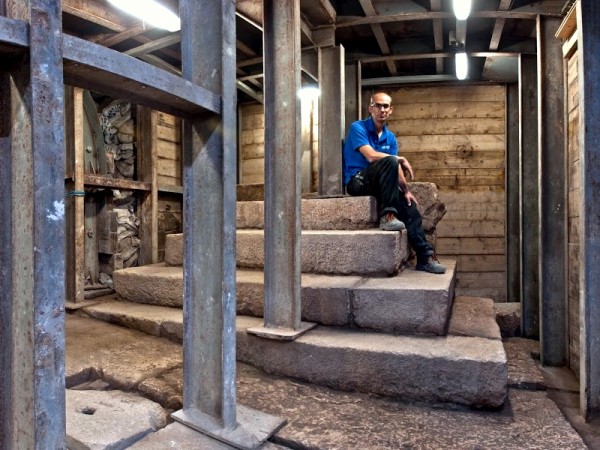 Szanton and Uziel noted that the stairs are unique.  (Israel HaYom)

“To date, such a structure has yet to be found along the street in the numerous excavations that have taken place in Jerusalem and to the best of our knowledge outside of it.  For this reason, its exact use remains enigmatic,” the archaeologists stated.

“The structure is built along the street in a place that is clearly visible from afar by passersby making their way to the Temple,” they added.  “We believe the structure was a kind of monumental podium that attracted the public’s attention when walking on the city’s main street.”

Ongoing archaeological excavations by the Israel Antiquities Authority (IAA), the City of David Foundation and the Israel Nature and Parks Authority uncovered the staircase along with dozens of glass, stone and clay vessels at the base of the steps, which might provide a clue as to the podium’s purpose.

Rabbinic commentaries in the Mishnah and Talmud tell of “stones” during the Second Temple period that were used for public purposes, such as an auction block and the “Stone of Claims,” an ancient lost-and-found.

Whoever found an article “stood and proclaimed” and whoever lost an article “submitted his identification marks and received it back.”  It is not known at this time if the articles of glass, stone and clay found at this podium were among such objects.  (IAA) 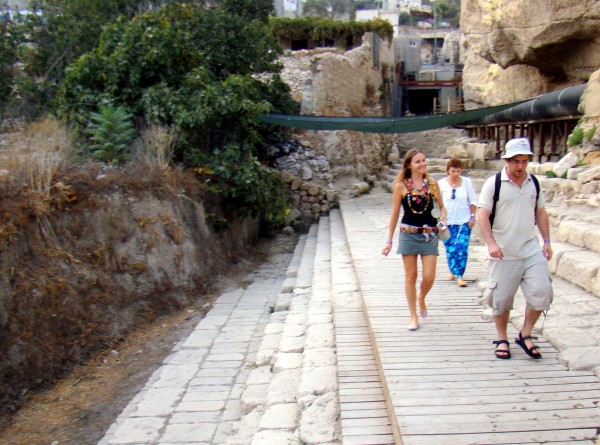 The Pool of Siloam is mentioned in both the Tanakh (Hebrew Bible) and the Brit Chadashah (New Testament).  In John 9:1-9, we read that Yeshua (Jesus) healed a man who had been blind from birth.  Yeshua made mud with His saliva and spread the mud over the blind man’s eyes, telling him, “Go wash yourself in the Pool of Siloam.”  The man returned healed.  (Photo by Anita Gould)

The structure is located beside a road that led to the Temple from the rock-cut Pool of Siloam, which lies south of the City of David and draws water mainly from the Gihon Spring above the Kidron Valley that sits east of the City.

While the street has not  been excavated entirely, huge stone slabs from the first century AD that are identified with a major Second Temple period building project are visible.

The national park where the podium of steps was found is zoned to safeguard the Old City from construction work taking place beyond its walls, in the newer part of Jerusalem.

Also called the Jerusalem Walls National Park, the City of David’s features include the gates and the promenade of the Jerusalem Old City, the Tower of David Museum and surrounding antiquities site, Mount Zion with David’s Tomb, Mount Zion Cemetery and the Kidron Valley with the tombs of Absalom and the Prophet Zechariah.

“Come near me and listen to this: ‘From the first announcement I have not spoken in secret; at the time it happens, I am there.’  And now the Sovereign Lord has sent me, endowed with his Spirit.  This is what the Lord says—your Redeemer, the Holy One of Israel: ’I am the Lord your God, who teaches you what is best for you, who directs you in the way you should go.'”  (Isaiah 48:16–17)