“Nothing in all creation is hidden from God’s sight.  Everything is uncovered and laid bare before the eyes of Him to whom we must give account.”  (Hebrews 4:13)

While excavating for a new kindergarten, builders in Jerusalem unearthed a cave with a manmade door.  Inside the chamber was a 2,000-year-old mikvah (immersion bath) with a number of inscriptions on the walls.

“Such a concentration of inscriptions and symbols from the Second Temple period at one archaeological site, and in such a state of preservation, is rare and unique and most intriguing,” said a statement from excavation directors Royee Greenwald and Alexander Wiegmann from the Israel Antiquities Authority (IAA).

The inscriptions, created using mud and soot, began fading soon after exposure to the fresh air.  The IAA removed a veneer bearing the symbols and delivered it to a lab for preservation and study. 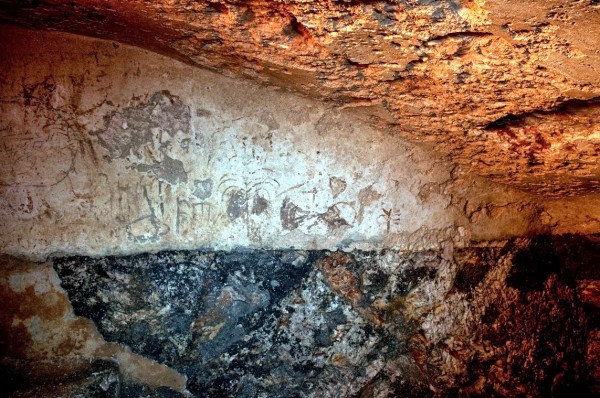 A routine archaeological inspection by the Israel Antiquities Authority of the construction of a nursery school being built at the initiative of the Jerusalem municipality led to the discovery of a Second Temple Era mikvah adorned with numerous inscriptions and symbols.

Wiegmann and Greenwald suggested interpreting the symbols on the one hand “as secular, and on the other as symbols of religious significance and deep spirituality,” however the inscriptions’ meaning and connection to one another are still a mystery.

“What is the relationship between the symbols and the inscriptions, and why, of all places, were they drawn in the ritual bath?  Who is responsible for painting them?  Was it one person, or several people?” reads the joint statement.

“Was it someone who jokingly wanted to scribble graffiti?  Or perhaps what we have here is a desire to convey a deeply spiritual and religious message—perhaps even a cry for help as a result of a traumatic event?”

Disastrous events occurring at the time include the Temple’s destruction and the great fire of Jerusalem under the Romans during the First Jewish-Roman War, also known as the Great Revolt, of AD 66–70.  (Jewish Virtual Library)

Some of the pictographs found resemble a boat, needle-branched tree, various foliage, a fountain or a palm tree, and a fish.

The IAA found the mikvah in the Arnona neighborhood of Jerusalem on the last day of a standard pre-construction procedure that looks for unknown antiquity sites before building any modern structure.  (Times of Israel)

The doorway that leads to the mikvah continues down a few steps with stone benches hewn alongside where visitors would prepare to immerse for purification.

Immersion in free-flowing water, in open bodies of water or in mikvah pools continues to be practiced in Judaism and by many Believers in Yeshua HaMashiach (Jesus the Messiah).

First-century Jewish Believers did too.

Even after his mikvah as a believer in Yeshua as the Messiah, Paul demonstrates in Acts 21:24–25 that believers continued to practice Jewish ritual immersion.

Showing “obedience to the law, … Paul took the men and purified himself along with them” before visiting the Temple.

The men would have used a Second Temple Era mikvah site, such as the Arnona bath just discovered.