“And he carried me away in the Spirit to a mountain great and high, and showed me the Holy City, Jerusalem, coming down out of heaven from God. … The wall was made of jasper, and the city of pure gold, as pure as glass.”  (Revelation 21:10, 18)

Four ancient glass kilns found in the Galilee this past summer reveal that Israel was a leading glass manufacturer in the Roman World.

Ian Freestone, a visiting professor of archaeological materials and technology from University College London, calls the site “one of the glass-making centers of the ancient world.”  (YouTube)

“This work is really important for us to understand the distribution and the occurrence of glass all over the ancient world because it was being exported everywhere,” Freestone says, “and the work of the Israel Antiquities Authority on the remains in Israel has revolutionized our understanding of ancient glass-making.  It’s amongst the most important work on ancient glass going on anywhere.” 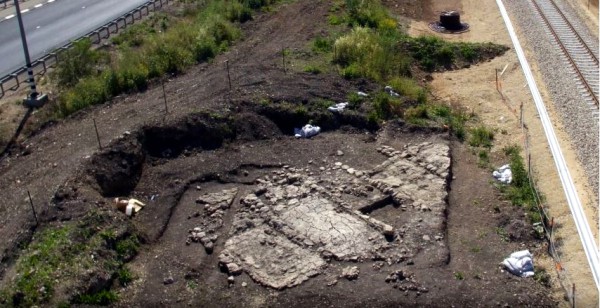 The remains of the oldest glassworks ever found in Israel.  It was a world center for glass production in antiquity.  (YouTube capture)

Abdel al-Salam Sa’id, the Israel Antiquities Authority (IAA) excavation director who discovered the remains of the glass-making facility, announced this month the IAA’s findings:  “fragments of floors, pieces of vitrified bricks from the walls and ceilings of the kilns, and clean raw glass chips.”

The site is slated for a railway that will connect Afula, which overlooks the Jezreel Valley, and Haifa, which is on the Mediterranean coast.  This floor of an industrial facility is lined with entrenched ash and chunks of glass, stated Sa’id.

“We were absolutely overwhelmed with excitement when we understood the great significance of the finds,” he said.

“According to a price edict circulated by the Roman emperor Diocletian in the early fourth century CE, there were two kinds of glass: the first was known as Judean glass (from the Land of Israel) and the second — Alexandrian glass (from Alexandria, Egypt),” the IAA states. 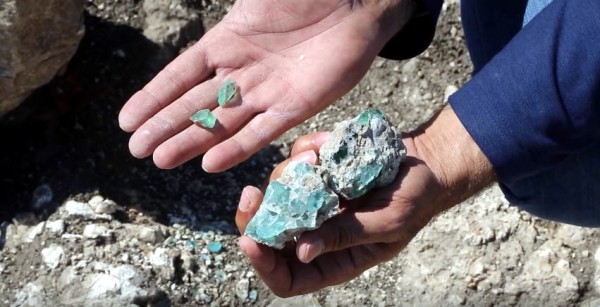 Ancient chunks of glass found at a glasswork in Israel that supplied the Roman world.

“Judean glass was a light green color and less expensive than Egyptian glass.  The question was:  Where were the centers that manufactured this Judean glass that was a branded product known throughout the Roman Empire and whose price was engraved on stone tablets so as to ensure fair trade[?]” the IAA asks.  “The current discovery completes the missing link in the research and indicates the location where the famous Judean glass was produced.”

“We know from historical sources dating to the Roman period that the Valley of Acre was renowned for the excellent quality of sand located there, which was highly suitable for the manufacture of glass,” glass antiquities expert Gorin-Rosen said.  (JN)

Yael Gorin-Rosen, the lead curator of the IAA Glass Department, explains that “Chemical analyses conducted on glass vessels from this [Late Roman] period — which were discovered until now at sites in Europe and in shipwrecks in the Mediterranean basin — have shown that the source of the glass is from our region.”

“Now, for the first time, the kilns have been found where the raw material was manufactured that was used to produce this glassware,” she said.  (JNi Media)

The 1,600-year-old kilns have outranked Apollonia-Asruf in Herzliya, 17 km north of Jaffa, as the oldest glass production facility in Israel.

Apollonia’s three raw glass furnaces, discovered in 1950 and 2002, have been dated to the sixth and seventh centuries.

The Apollonia excavations produced “considerable numbers of raw blue glass chunks and fragmentary glass vessels such as bowls, bottles, wine-glasses, cosmetic tubes, and lamp bowls dating to the late Byzantine period,” writes Freestone and other experts in the 2008 edition of Journal of Glass Studies (vol. 50, p. 68).

Other furnaces at Beth Eli‘ezer in Hadera, Israel, are “believed to have been in operation during the eighth century because the glass they produced matches that of Umayyad vessels from Ramla.”  (p. 75)

Of the kilns now dated to the Late Roman period, Freestone says, “It’s fantastic.  I’ve waited 20 years to see it.  Since the excavations of Beit Eli’ezer of the later furnaces, I’ve been waiting to see where the Romans made their glass.”