“About Zebulun he said: ’Rejoice, Zebulun, in your going out, and you, Issachar, in your tents.  They will summon peoples to the mountain and there offer the sacrifices of the righteous; they will feast on the abundance of the seas, on the treasures hidden in the sand.’”  (Deuteronomy 33:18–19)

This Thursday, the leaders of Israel, Greece, and Cyprus met in Nicosia, the Cypriot capital, with a view to strengthening cooperation and reinforcing stability in the region.

Israeli Prime Minister Benjamin Netanyahu revealed a united collaboration on research, tourism, technology, a shared electric grid, and a gas pipeline between Israel-Greece and possibly into Europe as having historic implications.

“The last time that Greeks, Cypriots, and Jews sat around the table and talked on a common framework was about 2,000 years ago,” he said. 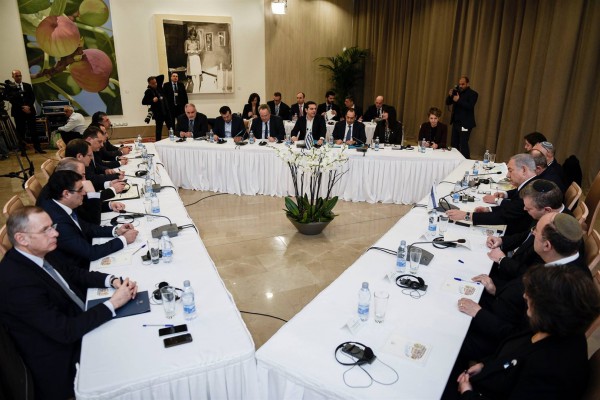 Trilateral meetings between Greece, Cypress, and Israel may bring new stability in the region.

Netanyahu stated at the summit that the natural gas found in the Mediterranean serves as an opportunity “to form a trilateral committee between Greece, Cyprus, and Israel, to plan the possibility of a pipeline that would take our common resources of gas and export them to Europe via Greece.”

Netanyahu explained to reporters that adding a link from Cyprus-Israel to Greece would depend upon the development of other fields and on how much more hydrocarbon gas is discovered.  He added that Israel also has the capability to pipe gas to Egypt and Turkey.

“We are preparing for all of the options at once,” Netanyahu said.  “It needs to be understood that Israel as a power in the regional energy market is something new.  The interests of Greece and Cyprus and [some] Arab states … [are] to strengthen alliances with Israel.”  (JPost)

Netanyahu said that the three nations intend to build an interconnected underwater cable linking the electricity grids of first Israel and Cyprus, and then of Greece.

He said discussions will take place on “how we can increase the efficiency of our water management, agriculture, tourism, technology, hi-tech ventures” as well as cyber-emergency services, firefighting, search and rescue, security, migration, and fighting terrorism.

“We share the ideas of pluralism, diversity, choice, debate … and that forms an immediate bond of friendship,” Netanyahu said at the trilateral meeting, adding cooperation can advance stability, security, prosperity, and peace. 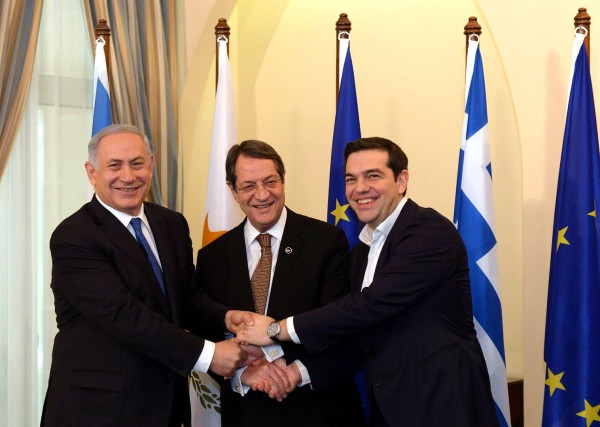 Anastasiades confirmed that the three states share “the conviction that in order to effectively counter multiple challenges confronting us on a local, regional and international level, we must work collectively.”  (Ynet)

Netanyahu pointed to the countries’ common democratic values, goals, and interests in the Eastern Mediterranean and said their trilateral cooperation will help the wider region.

“Our partnership is not exclusive in design or nature, and we are ready to welcome other like-minded actors to join our efforts to promote coordination and cooperation, as well as regional peace and stability,” states the Trilateral Summit Declaration.