Netanyahu at Expo Milan: Israel Creates a Better Future for Everyone

“Abraham will surely become a great and powerful nation, and all nations on earth will be blessed through him.”  (Genesis 18:18)

Israeli Prime Minister Benjamin Netanyahu highlighted Israel’s progress in agriculture and nutrition at Expo Milan 2015 on Thursday, where he said Israel’s impact through agricultural innovations outweighs the impact of those hostile to Israel.

Millions of people worldwide—from Latin America to Africa, China and India—have benefited directly from Israel’s advancements in cultivation and nutrition, Netanyahu said at the world Expo—boycotters, be aware.  (i24news)

“This is stronger than any attempt to push us to the margins, because we are center-stage in agriculture, scientific innovations, technology, and we are creating a better future for everyone,” he said. 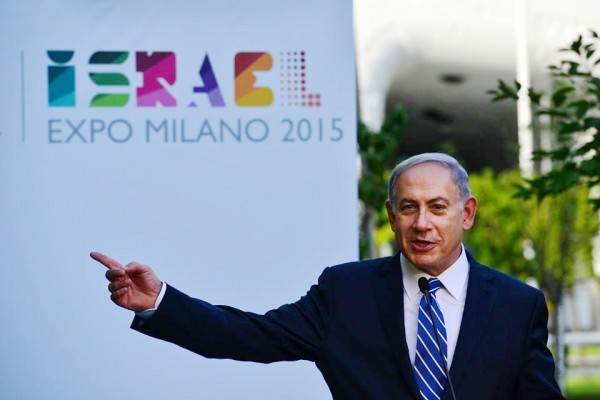 Netanyahu also expressed optimism that Israel is playing a role in tackling the doomsday expectations that Rev. Thomas Malthus made in 1798.

“An Essay on the Principle of Population” by Malthus feared a catastrophe in the wake of an earth that could no longer sustain it rising population, resulting in famine and disease.  However, the “irreversible disparity between the numbers of people and the food available” clearly has been defeated by science, Netanyahu said.

Netanyahu also noted that Israel has partnered with Italy to help Senegal improve its crop growth and agriculture.  Yet, he added: “Why one?  Why not twenty, why not thirty?  If we pool our resources, our knowledge, our technology we can help many, many countries in Africa to not only better agriculture [but] to better life.”

Israel’s 2,370 square meter (25,500 sq ft) “Fields of Tomorrow” pavilion at Expo Milan sits in a high profile location next to Italy’s showcase.  Designed with a 70-by-12-meter hanging garden by award-winning architect David Knafo, the vertical field of flowers and plants presents changing bouquets of color throughout the six-month season the Expo is open—May 1 through October 31. 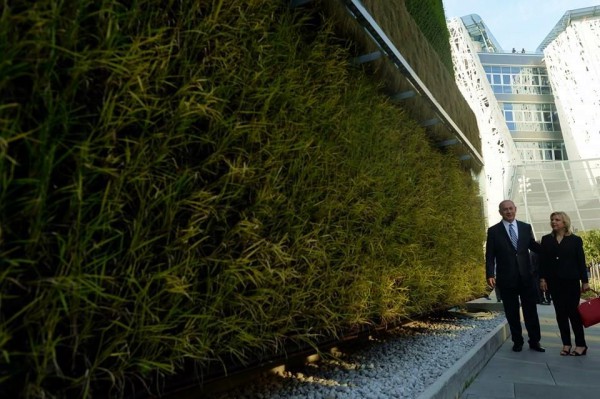 Millions of visitors have seen the international exhibition since it opened, bearing witness to world innovations that highlight the theme: “Feeding the Planet, Energy for Life.”  (JPost)

Israel’s pavilion, a mass “granary of knowledge,” links ideas about the future of agriculture with Israel’s tradition of three thousand years, “which through work, research and development has been able to transform much of its mostly arid land into fertile terrain.”  (Expo2015)

“Israel in this field has been a pioneer of the world for the last 70 and more years, even before the founding of our state,” Netanyahu said at the fair.

By embracing innovation, Israel has been able to transform sea water into one-quarter of the country’s fresh-water needs and, in recent years, has begun to process sewage for 5% of its fresh water.  (Bloomberg)

“We’ve developed tremendous strides in drip irrigation, in desalinization.  We’re the world’s leader in wastewater recycling.  We recycle about 80% of our wastewater.  I think number two is about 25%,” Netanyahu said.  (PMO) 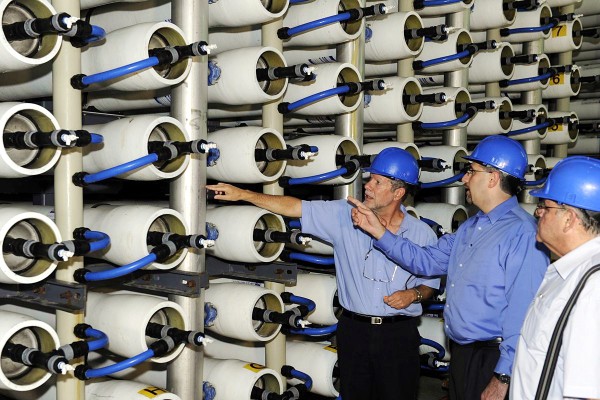 The World Economic Forum (WEF) in January named the world’s water crisis as the “no. 1 global risk based on impact to society” and the eighth most likely global risk to occur within a decade; nevertheless, Israel uniquely demonstrates how to confront such matters of life and death with science, innovation and creative thinking.

According to the WEF report, 750 million people lack access to safe drinking water; but if a Jewish country the size of New Jersey has been able to create fresh water for 2 million people a year in a dry and arid land, the world’s water crisis can be solved.

“We have 10 times more population than we had when the state was founded 67 years ago and we have half the rainfall.  Yet Israel has no water problems because we were able to solve this with all these techniques,” Netanyahu said Thursday. 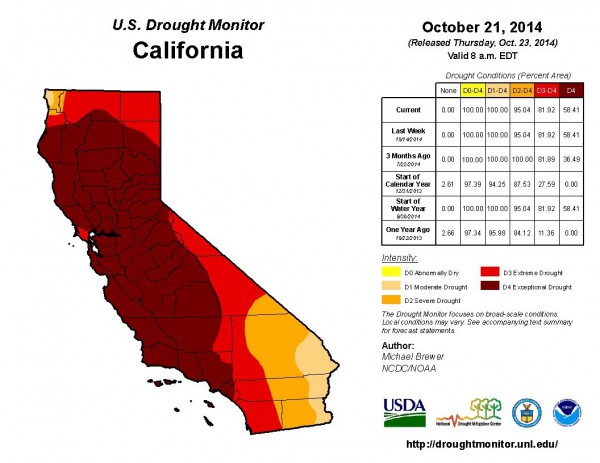 More than 70% of California is now in “extreme” drought, with nearly half of the state in “exceptional” drought, the most serious category, according to the U.S. Drought Monitor.

Beyond solving their nation’s own problems, Israeli companies, such as IDE Technologies, are sharing their knowledge and new technologies with the rest of the world.  This year, IDE Technologies began building a desalination plant near San Diego to tackle California’s drought.  (USA Today)

Netanyahu affirmed Israel’s commitment to tikkun olam, repairing the world:  “We are prepared and are doing our share to partake this information with people everywhere around the world, so they can have water, they can have crops, they can have cows that give a lot more milk and many, many other things that offer the betterment for mankind.”

Will Israel be the solution to the world’s water crisis?

In the physical, quite possibly.

In the spiritual, according to prophecy, the New Jerusalem will ultimately be the location of “the river of the water of life, as clear as crystal, flowing from the throne of God and of the Lamb down the middle of the great street of the city.”  (Revelation 22:1)

And in this great city, Israel’s agricultural blessings will continue to bear fruit among the nations: “On each side of the river stood the tree of life, bearing twelve crops of fruit, yielding its fruit every month.  And the leaves of the tree are for the healing of the nations.”  (Revelation 22:2)