Jonathan Pollard Released After 30 Years in US Prison

“I will keep you and will make you to be a covenant for the people and a light for the Gentiles, to open eyes that are blind, to free captives from prison and to release from the dungeon those who sit in darkness.”  (Isaiah 42:6–7)

During the 30 years Navy intelligence analyst Jonathan Pollard served in a United States federal prison for conspiracy to commit espionage, there have been many attempts to secure his release.  They all failed; however, on November 20, 61-year-old Pollard completed his life sentence and was released on parole.

“It’s a happy day that he’s getting out of jail and I hope he gets to live a normal life, but I’d be happier if he was released a decade ago,” said Lawrence Korb, senior adviser to the Washington-based Center for Defense Information and the 1981–1985 United States Assistant Secretary of Defense. 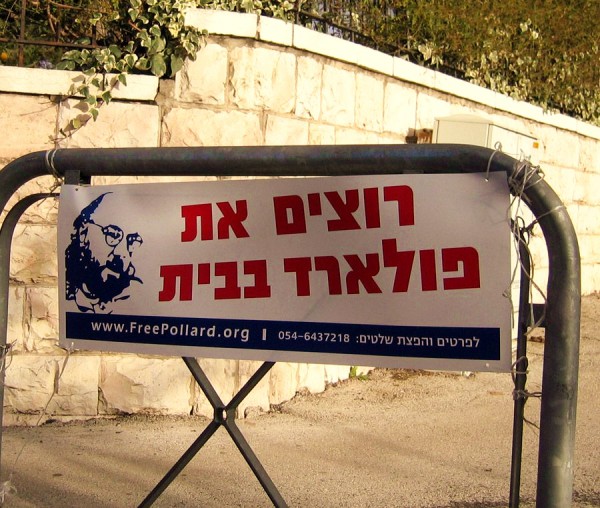 Pollard was charged with only “one count of passing classified information to an ally [Israel], without intent to harm the United States.”  He was not charged with treason nor indicted for harming the US or for compromising codes, agents or war plans.  (Jonathan Pollard)

Before his arrest in 1985, Pollard learned as a civilian American Naval intelligence analyst “that information vital to Israel’s security was being deliberately withheld,” which “Israel was legally entitled to … according to a 1983 Memorandum of Understanding” writes the Jonathan Pollard website.

“The information being withheld from Israel,” the website reports, “included Syrian, Iraqi, Libyan and Iranian nuclear, chemical, and biological warfare capabilities — being developed for use against Israel.  It also included information on ballistic missile development by these countries and information on planned terrorist attacks against Israeli civilian targets.”

When his superiors told Pollard, “Jews get nervous talking about poison gas; they don’t need to know,” Pollard began giving information to Israel directly.  Pollard was arrested by the FBI and took a plea bargain rather than having a public trial.

Five years ago, Korb said Pollard’s punishment was too severe for his crime, where the median sentence for giving classified information to an ally has been two to four years in prison.  Korb pointed out that an assumption by then Secretary of Defense Caspar Weinberger of Pollard’s guilt in the deaths of 11 American agents in the former USSR had been debunked.  (Haaretz)

“We all welcome the release of Jonathan Pollard from prison after so many long and hard years,” Rivlin said.  “Throughout the years, our pain was Pollard’s pain… we felt the responsibility and obligation to secure his release,” Rivlin added, speaking of repeated, failed attempts by Israel and non-profit groups to secure Pollard’s release.

“The people of Israel welcome the release of Jonathan Pollard,” Netanyahu said in a public statement.  “As someone who raised his case before successive US presidents many times, I longed for this day.  And now after three long and difficult decades, Jonathan is being released.”

Netanyahu added, “I wish him on this first Sabbath that he’s going to spend with his family a lot of joy, a lot of happiness, a lot of peace.  May these be the hallmarks for the rest of his life.”  (Facebook/IsraeliPM)

Pollard is required to remain in the US for another five years and to wear a GPS bracelet at all times, usually worn by dangerous felons, pedophiles and stalkers.

Pollard’s pro-bono lawyers, Eliot Lauer and Jacques Semmelman have filed against the parole conditions, stating, “There is no basis whatsoever to treat Mr. Pollard in that manner, and doing so is vindictive and cruel.”

“The notion that, having fought for and finally obtained his release after serving 30 years in prison, Mr. Pollard will now disclose stale 30-year old information to anyone is preposterous,” added Pollard’s lawyers about Pollard’s parole conditions, noting also that any information that he may have is outdated.

“He has no classified information, so he should be able to talk to the press, go online and go to Israel, where he’s a citizen,” said Harvard Law School professor and renowned lawyer Alan Dershowitz, who recently won a debate at Oxford University over the Boycott, Divestment and Sanctions (BDS) movement against Israel.

In the past, Dershowitz has served as Pollard’s legal representation and told The Jerusalem Post that the parole officers’ conditions on Pollard are an “abuse of … discretion.”