“And God said, ‘Let the water teem with living creatures, and let birds fly above the earth across the vault of the sky.'”  (Genesis 1:20)

Hamas divers seized a dolphin this week and accused it of spying for Israel, according to a Wednesday report by Gaza daily Al-Quds.

Deep divers, beware, Hamas members warned the press, claiming there were small projectiles in the dolphin-docked equipment that could be fired at submerged swimmers.

“The spy dolphin was also equipped with small arrows and bullets to enable it to target humans, including Hamas special forces,” reported Iran’s Fars News Agency.

Members of the Al-Qassam Brigade, the Hamas military wing, expressed belief that Israel was using the dolphin to monitor or attack naval commandos scheduled to conduct training in the sea.  (JPost) 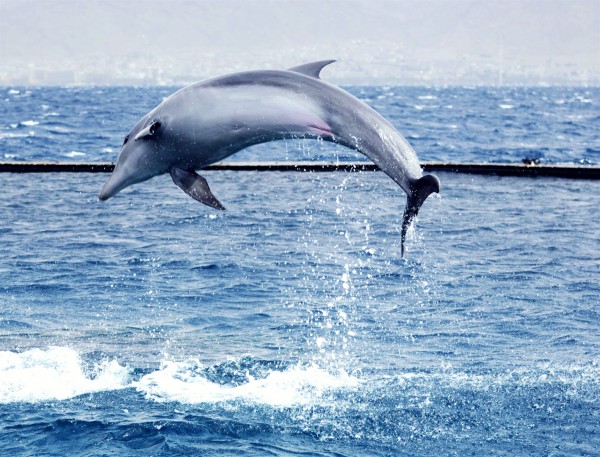 A dolphin in the Red Sea at Eilat, Israel.

Times of Israel blogger and comedian Benji Lovitt offered a tongue-in-cheek reaction to the story, making quips that “Sea World’s traveling water show has canceled the Zionist spy dolphin’s performance in Spain until it clarifies its position on Palestinian statehood.”

“After capturing the Israeli spy dolphin, Hamas subjected it to ten hours of waterboarding, until realizing that he liked it,” the comedian added, also joking that “the family of the dolphin [has] set up a solidarity aquarium outside Bibi’s residence.”

Israel has long been accused of using wildlife to spy and even blamed for shark attacks.  In 2010, an Egyptian leader accused Israel of directing sharks to attack tourists in the Red Sea.

“What is being said about the Mossad [Israel’s CIA equivalent] throwing the deadly shark [in the sea] to hit tourism in Egypt is not out of the question, but it needs time to confirm,” said South Sinai Gov. Muhammad Abdel Fadil Shousha at the time.  (egynews)

In 2013, Egypt took captive a stork deemed to be an Israeli spy after finding a device on its leg; later, the device was attributed to French scientists.  In 2012, Saudis accused Israel of using a vulture as a Mossad spy, after the endangered bird was found in Sudan with a GPS tracker and a Tel Aviv University band.  (NYPost)

Accusations of espionage have flown against other aviary agents, as well: ducks, eagle, and the European Bee-Eater.

Reports have not indicated whether Hamas officials have determined the punishment for alleged oceanic agents of Mossad.