“From one man he made all the nations, that they should inhabit the whole earth; and he marked out their appointed times in history and the boundaries of their lands.”  (Acts 17:26)

On Saturday at the annual Saban Forum of the Brookings Institution, United States Secretary of State John Kerry rebuked Israeli and Palestinian leadership, warning them of a bleak future if they failed to negotiate peace.

“How would that bring them closer to peace?  Isn’t it the Palestinian people who would then suffer most?  Do they really believe that boycotts and efforts to delegitimize Israel, or passing biased resolutions in international bodies, are going to help them achieve a Palestinian state?” he asked.

“Are Palestinian officials really doing everything possible to prevent all forms of incitement?” he continued.  “Don’t these terrorist attacks against innocent civilians deserve public condemnation?  And how can Israelis be assured that the Palestinians are truly prepared to end the conflict and allow them to live in peace as part of a two-state solution?  How do they address Israel’s concerns about not creating another situation like Gaza in the West Bank?” 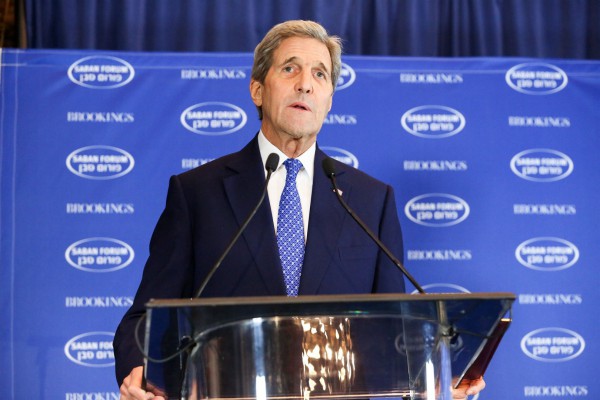 He said that the consequence of annexing Gaza, Judea and Samaria would result in a bi-national state — one state with Jews and Palestinians as co-citizens.  That would weaken Israel’s Jewish and democratic identity, he said.

“The truth is many of those arguing against the PA simply don’t believe in two states.  Prime Minister [Netanyahu] has been clear that he does not want a bi-national state, and that he remains committed to the vision of two states for two peoples; but at the same time, many current Israeli ministers have been equally clear that they oppose a Palestinian state, not just now but ever,” Kerry said.

“It is important that [two states for two peoples] not become a slogan, not become a throwaway phrase; that it becomes a policy, which is what it is meant to be,” Kerry said.

“The one-state solution is no solution at all for a secure, Jewish, democratic Israel living in peace; it is simply not a viable option,” Kerry said.

“How does Israel possibly maintain its character as a Jewish and democratic state when, from the river to the sea, there would not even be a Jewish majority?”  Kerry asked at Brookings, in questionable taste since Palestinians have often chanted they want to reclaim all of “Palestine” from the Jordan River to the Mediterranean Sea (the entire region of Israel). 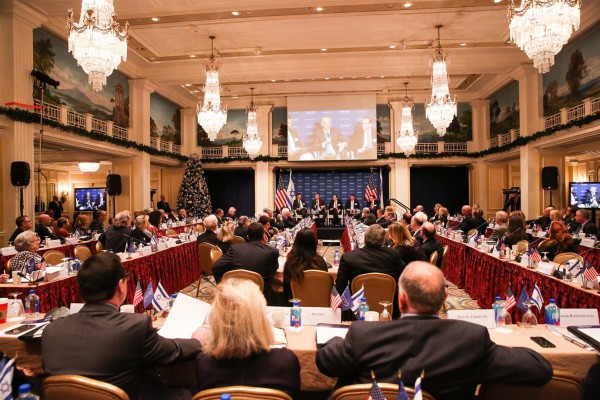 Delegates participate in a panel discussion at the 2015 Saban Forum.  (Brookings Institution photo by Ralph Alswang)

Kerry also suggested that if Israel were to annex Judea, Samaria and Gaza, there would be an increase of “chaos, lawlessness and desperation” among terrorists and extremists, and that it somehow would create a “vacuum.”

“The United States is deeply committed to secure Israel’s future as a Jewish and democratic state, and we are also committed to an independent, viable Palestinian state, where Palestinians can live in freedom and dignity,” Kerry said.  “The only way to achieve that is through a negotiated solution that creates two states for two peoples side by side, living in peace and security.”

Israeli Prime Minister Benjamin Netanyahu followed Kerry’s warning at his weekly cabinet meeting on Sunday saying that Israel will not become a bi-national state.  He reiterated that “in order to have peace, the other side must decide it too wants peace.”

He emphasized that the PA continues to erect obstacles to peace — including any viable two-state agreements.

“Unfortunately, this is what we see:  Primarily, the incitement in the Palestinian Authority continues.  Then I see the chief Palestinian negotiator [Saeb Erekat] visiting the family of a terrorist who tried to murder Jews,” Netanyahu said of the PA security officer-turned-terrorist who shot an Israeli soldier and civilian on Thursday.  “Not only is he not condemning [terror attacks], he’s going to offer his condolences.”  (Ynet)