“In a desert land he found him, in a barren and howling waste.  He shielded him and cared for him; he guarded him as the apple of his eye.”  (Deuteronomy 32:10)

Last Sunday, the Jerusalem Municipality began installing steel barriers at some of the 300 bus stops around the Israeli capital designated for the security upgrade.

Jerusalem Mayor Nir Barkat presented the plan for the waist-high columns to Israel’s Transportation Minister Yishrael Katz after a terrorist from eastern Jerusalem rammed his vehicle into a bus stop near the Chords Bridge on December 14.  (Times of Israel)

“Suddenly a car went up onto a bus station, shots immediately opened up. … There are people in the station. … A number of people simply lifted up the car because there were people underneath it,” said Israel Radio reporter Miri Krimolovsky who witnessed the attack firsthand.  (World Jewish Congress) 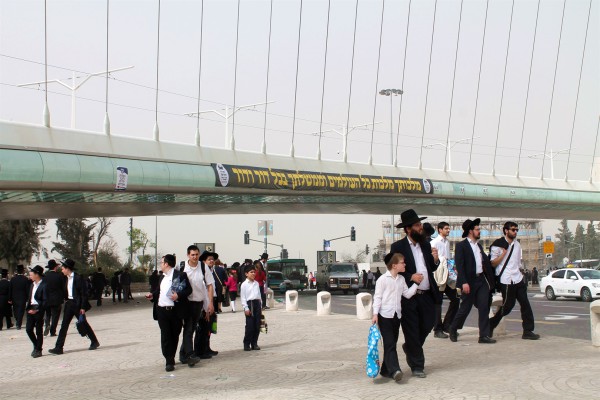 Jewish Israelis walk under the Chords Bridge in Jerusalem.

Eleven people were wounded in the attack, including year-old Yotham Sitbon, whose leg was crushed by the car and required amputation.

After the attack, Israeli Prime Minister Benjamin Netanyahu met with Katz, Barkat and Israel’s Public Security Minister Gilad Erdan to order the fortification.  The city will require a month and an investment of NIS 2 million to help secure residents as they utilize the main mode of transportation in Israel.  (Ynet)

“I don’t see an end to the terror wave,” Erdan told Channel 2.  It is a disturbing appraisal reflecting the need to increase efforts to shield citizens from the blows of persistent terrorism.

Since the start of the terror wave, Arab Palestinian terrorists have been responsible for 21 car rammings — vehicular attacks targeting pedestrians who are often found milling together at bus stops.  (IDF Blog) 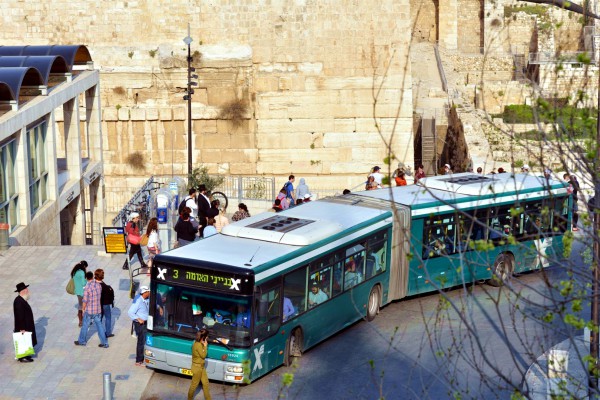 People board the bus at the stop near the Western (Wailing) Wall in Jerusalem.

The wave continued with multiple stabbings at the Jaffa Gate, the main entrance to the Jerusalem Old City on Wednesday, December 23.

“When we arrived, there were three injured people, with one of their lives really being in danger,” said Nahum Bernstein, the deputy head of the Jerusalem branch of the rescue service United Hatzalah.  The victim in critical condition was hit by errant police gunfire that had targeted the pair of terrorists.  “It is a difficult scene for pedestrians on their way to the Western Wall.”  (Jerusalem Online)

Rabbi Reuven Biermacher, Rabbi at Aish HaTorah Spanish Program, succumbed to stab wounds.  Ofer Ben-Ari, 46, of Jerusalem, who was struck by police fire in the chaos, also died.  May their memory be a blessing.

South African tourist Howard Feldman and his family were 50 paces away from the site of the attack.  They heard the sound of gunfire and saw that “people started to run.  Not away from the scene but towards it.”

Feldman, along with his wife and 14-year-old son Judah, also raced toward the scene.

“I had a sense that we needed to be part of the collective, almost like one becomes part of a minyan, which is essentially the creation of a community.  And I needed my son [Judah] to be with me,” Feldman wrote in a Times of Israel blog post on Wednesday following the attack.

“The scene was one of efficient chaos.  There was more blood than I could have imagined and more ‘weaponised’ people than I would have thought possible.  The one terrorist was clearly dead and the other was being restrained,” Feldman wrote.  “A victim was being cared for and then lifted on a stretcher, his ‘payot’ falling loosely and defining the demographic.  This was the moment that made it real for Judah.  That terror doesn’t play favourites.”

“Undercover police with faces covered scoured the scene while frantic passersby tried to determine if they knew the victims and what their status was,” Feldman recounted.  “If there was still danger we didn’t feel it but we were overwhelmed with the stark reality of the situation, how close we were to the danger and how a poor cup of coffee separated us from being at exactly that spot at the time of the stabbing.”

Afterwards, a friend asked the Feldmans if they wanted to leave Jerusalem to get away from the tension.

“I said I was not all right but I didn’t want to leave.  On the contrary, this is exactly where I wanted to be,” Feldman wrote.  “We gathered our shopping bags that now felt worthless and shallow.  No one complained about the walk home but every passerby was viewed with suspicion.  And indeed we will go to the Kotel later today where I will thank God for the worst and the best coffee I ever had.” 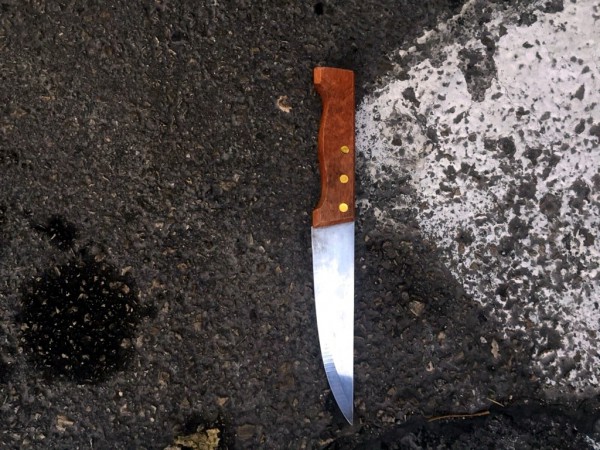 The knife a Palestinian terrorist used in a stabbing attack in Jerusalem on December 27, 2015.

Palestinian violence has continued since September 14, 2015 with more than 122 stabbings, 75 grenade and petrol-bomb attacks and 46 shootings.  (Ministry of Foreign Affairs)

The steel barriers being installed will match the effect of concrete barriers the city installed last year in the wake of car-ramming attacks at passenger stations along the light rail.

Such barriers are saving lives.  A concrete post stopped a runaway car on December 19 as a terrorist jumped out of it and ran toward civilian security guards at the Qalandiya checkpoint north of Jerusalem.  The guards shot the terrorist in the legs.

On October 22, 2014, a 21-year-old non-Israeli from Silwan drove his car into people at the Ammunition Hill tram stop, slaying a 22-year-old Ecuadorian pursuing conversion to Judaism and a 3-month-old American-Israeli, who had been seated in her stroller, Chaya Zissel Braun.

On November 5, 2014, another vehicular attack at the light rail was instigated by Hamas terrorist and Israeli citizen Ibrahim al-Akri, who drove his van at high speed into the crowd at the Shimon HaTzadik station.

Recent attacks include the stabbing of a soldier in Huwara by two Palestinians on December 27.  On the same day, a Palestinian stabbed a soldier near Jerusalem’s central bus station.

On December 26, a Palestinian rammed a car into Israel Defense Forces soldiers south of Nablus.

On December 25, an assailant attempted a car ramming in Silwad.

On December 24, a Palestinian attempted to stab forces using a screwdriver at the checkpoint near Hebron.  Earlier that day, a Palestinian with a knife stabbed two security personnel in Ariel. 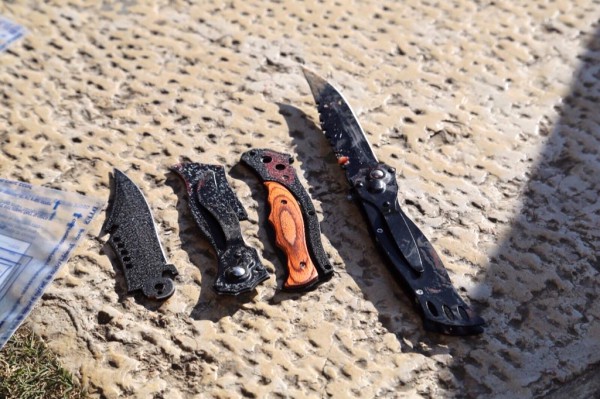 Knives used by Palestinian terrorists in a Jerusalem stabbing attack on December 23, 2015.

On December 19, a Palestinian went on a stabbing rampage in Ra’anana; 46-year-old Dikla Dvir was in her kitchen when a terrorist entered her house through the sliding-glass window:

“I asked him what was happening because I thought he was a burglar, but while I was asking he started stabbing me,” said Dvir.  “I pushed him out and quickly locked the window while my husband and youngest son ran all around the house locking doors.”

After Dvir called the police, officers caught the stabber “just beyond our fence.” She was lightly injured but highly traumatized as was her 10 year-old son.

Before this conclusion, Dvir’s attacker had already stabbed a couple at the playground, while their 4-year-old son escaped.  The father suffered life-threatening abdominal injuries while the mother incurred minor injuries to her arm.

Their son is now “traumatized at home, working with a social worker.  He is completely shocked by what happened to his parents.  He has been saying that he keeps feeling like he is being stabbed,” says Eli Nagar, the mother’s brother.

The terrorist then ran into a synagogue where he cut Ilana Abergil in the hand, a volunteer helping prepare the last meal of Shabbat.  (Israel HaYom)

Between September 13 and December 23, Palestinian Arabs (and an Israeli Arab) have killed 24 people and wounded 283, including 24 seriously in active targeting of Jews and Israelis.

On November 16, in the midst of the terror wave, the Palestinian Authority’s Mahmoud Abbas added to the lunacy by stating, “This is a peaceful uprising.” 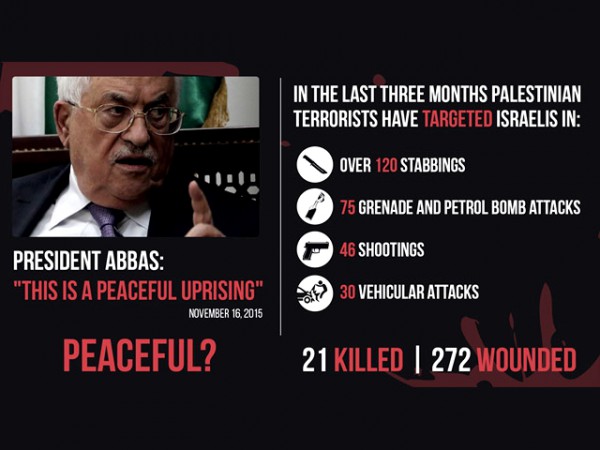