“Your commands are always with me and make me wiser than my enemies.” (Psalm 119:98)

Although Israel is not a member of the North Atlantic Treaty Organization (NATO), the alliance has recognized it needs to include Israel’s advanced intelligence and technology in their common goal to defeat terrorism.

Last month, NATO invited Israel to set up a permanent mission office at its Brussels headquarters.  On Tuesday, Israeli Prime Minister Benjamin Netanyahu brought the ambassadors of NATO to Jerusalem in their joint efforts to combat Islamic terrorism.

The strengthened relations with the allied states allows Israel to receive greater regional cooperation against the significant threat of Iran and toward other common interests.

“NATO has been obliged to take measures that represent the largest reinforcement of collective defense since the cold war … In the Middle East, terrorist groups spread chaos and violence, posing a threat to our security and our way of life,” said Danish Ambassador to Israel and NATO Contact Point Jesper Vahr at Jerusalem’s King David Hotel on Tuesday, June 14.

Vahr read a message from NATO Secretary General Jens Stoltenberg that said,  “Israel is a very important partner for NATO.  Like the nations of the alliance, Israel is an open democratic society.  Today our nations face greater, more complex threats than for many years.  It is right that those countries that share common values of democracy, human rights and the rule of law work together for the good of us all.”

Stoltenberg states that “Israel has for many years been an active member of NATO’s Mediterranean Dialogue,” which he notes is the “only security forum that brings together NATO allies with Israel and Arab countries.”

“Having [an Israeli] mission [in Brussels] will help us to take our political and practical cooperation to a higher level,” Stoltenberg says.

Netanyahu said that he plans to open the Israeli mission office “as soon as possible.” 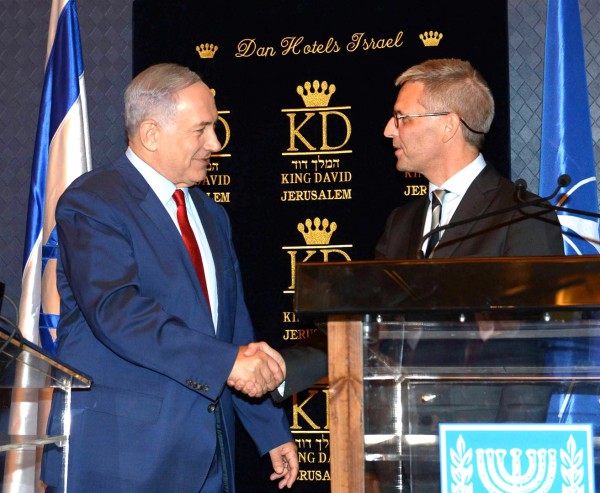 The NATO luncheon focused on security issues that affect both NATO and Israel, with Netanyahu saying that terrorism is an activity that should be defined in and of itself, not according to the identity of its victims.  (PMO)

“Terror, the indiscriminate systematic attack on innocent people, must always be confronted, must always be fought,” the prime minister said to the visiting ambassadors.  “And that doesn’t change in any case.  It does not depend on the identity of the victims; it depends on the nature of the act.”

“The act is evil and is perpetrated by people with evil designs, and we, the people of the civilized world, must band together to defeat it,” he continued.  (JPost)

At the luncheon, Netanyahu spoke of the terrorist attacks that targeted the gay nightclub Pulse in Orlando two days prior, killing 49 patrons, and the Max Brenner chocolate restaurant in the Tel Aviv Sarona Market six days before, killing four Israelis.

”A terrorist walked into a nightclub in Orlando and murdered nearly 50 innocent people, men and women,” Netanyahu said.  “These people were doing nothing wrong.  They were dancing with friends and enjoying music with loved ones.  The terrorist murdered them because he was driven by intolerance to the LGBT community and driven by hatred for freedom and diversity.”

“Now, days before that, a terrorist walked into a café in Tel Aviv and murdered four civilians.  They too did nothing wrong.  They were drinking coffee and enjoying the celebration of birthdays,” he added.  “Paris, Brussels, London, Tel Aviv, Jerusalem, Bali, Mumbai, New York, San Bernardino, and now Orlando and so many other cities have been struck by the same evil.  Terror knows no bounds, and that is why our cooperation in the battle against terrorism must know no bounds as well.” 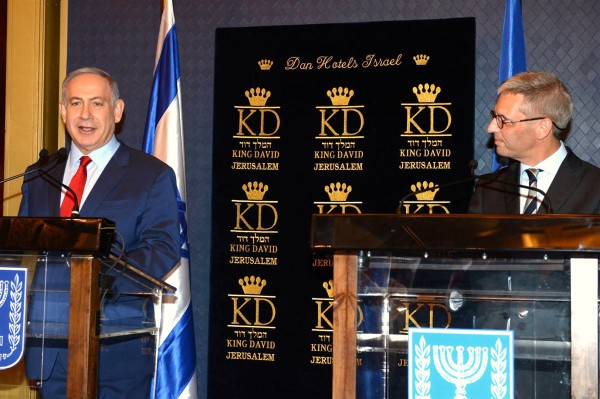 Prime Minister Benjamin Netanyahu gives a joint press statement together with Jesper Vahr, Denmark’s ambassador to Israel, during a meeting with ambassadors from NATO member states, in Jerusalem on June 14, 2016.

In this matter, Vahr said, “There is no justification for terrorism.  Period.  And that is true whether it happens in Paris, which again last night was the scene of a despicable act of terror, in Tel Aviv or in Orlando,” Vahr said and moved, “on behalf of the whole NATO family, to again condemn in the strongest terms these acts of terrorism.”

According to the NATO website, this intergovernmental military alliance, which developed from the 1949 North Atlantic Treaty, “constitutes a system of collective defence whereby its member states agree to mutual defense in response to an attack by any external party.”

“Collective defence means that an attack against one Ally is considered as an attack against all Allies,” states the NATO website, adding that the alliance invoked collective defence measures “for the first time in its history after the 9/11 terrorist attacks against the United States.”  It was invoked again during the “Russian-Ukranian crisis” and the “situation in Syria.”