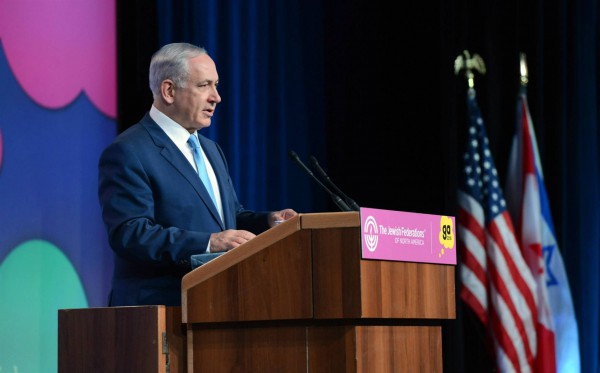 On Tuesday, 3,000 attended the General Assembly of the Jewish Federations of North America where Israeli Prime Minister Benjamin Netanyahu emphasized the need for unity among the Jewish People around the world.

“No matter what disagreements there have been within the Jewish community, maintaining the unity of our people is of paramount importance,” Netanyahu said.

“Whether Jews decide to live in Israel or not, I want to guarantee one thing to each and every one of you:  As Prime Minister of Israel, I will always ensure that all Jews can feel at home in Israel — Reform Jews, Conservative Jews, Orthodox Jews — all Jews,” he added.

Netanyahu announced the establishment of a round table to address the concerns of the different streams of Judaism in Israel.

“That’s significant.  That’s a governmental decision,” he said.  “And now, for the first time, the Government of Israel is joining with the Jewish Agency to invest in strengthening Reform and Conservative communities within Israel.  I am also hopeful that we will soon conclude a long overdue understanding that will ensure that the Kotel [Western Wall] is a source of unity for our people, not a point of division.”

Netanyahu reported to the Jewish Federations’ General Assembly that Obama had promised “to maintain Israel’s qualitative military edge so that Israel can ‘defend itself, by itself,’ against any threat.”

“Obama’s commitment to bolster Israel’s security for the next 10 years” comes in return for Israel’s “assistance almost on a daily basis, in intelligence and many other things,” Netanyahu said. 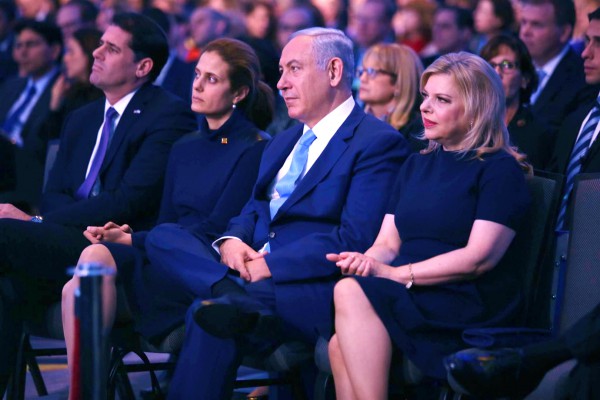 Prime Minister Benjamin Netanyahu and his wife Sara listen to a speaker at the Jewish Federations of North America General Assembly.

He named Israel as the leader of the world in waste-water recycling, with an incredible water surplus for a desert nation; receiving 20 percent of the global investment in cyber security in 2015; and progressing in both trade and innovation.  The growing economy allows Israel to pay for its increasing costs of defense, he said.

“I think we should no less be proud of Israel’s values.  And you see those values on display every day.  You see it in our freedom,” Netanyahu said, describing Israel’s “intense, robust democracy,” diversity, tolerance, egalitarianism and compassion.

“You see it in our pluralism — in our growing and thriving Christian population, the only Christian population in the Middle East that is growing and thriving and not shrinking and being decimated,” Netanyahu said, “in our proud and our strong LGBT community — Tel Aviv is a renowned capital of pluralism and diversity and tolerance, as is Israel altogether.”

Arab Israelis grow up knowing they can “be Knesset members or ambassadors or a Supreme Court justice” and girls grow up knowing “they can become fighter pilots, central bank governors and prime ministers,” he told the crowd.  Israelis actively serve wounded Syrians and devastated international communities, like Haiti and Nepal.

“I believe in you, in the unbreakable bond that unites Jews everywhere with the Jewish people.  It’s a bond of faith.  It’s a bond of hope — not the shallow hope of wishful thinking but the deep wellspring of confidence that comes from a people who have forded history’s most turbulent rivers and emerged triumphant on the other side in the Promised Land,” Netanyahu said.