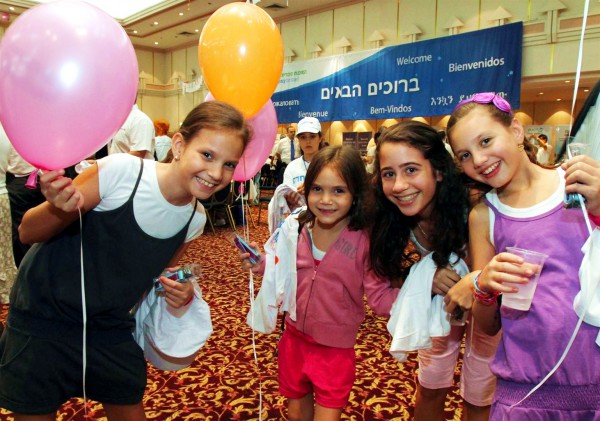 French immigrants pose for a photo at a Jewish Agency run immigrant fair in Jerusalem.

“This is what the Sovereign Lord says: “See, I will beckon to the nations, I will lift up My banner to the peoples; they will bring your sons in their arms and carry your daughters on their hips.”  (Isaiah 49:22)

Last year’s summer war did not stop 2014 from drawing record immigration numbers in ten years, as 26,500 new Israelis disembarked at Tel Aviv’s Ben Gurion Airport, a 32 percent increase from the year before.

While French and Ukrainian Jews led the surge, North America also claimed its highest immigration numbers to Israel in a decade, with 3,700 Jews leaving the United States and Canada in a 7 percent jump from 2013.  (Newsmax)

The Jewish Agency for Israel and the Ministry of Immigrant Absorption cited France as the number-one source, sending Israel 7,000 new olim (immigrants), more than twice the 3,400 French Jews of 2013.  (Ynet)

However, Ukraine led the world in aliyah growth, immigration jumping 190 percent from 2013.

“This year also saw a historic shift: For the first time in Israel’s history, the number of immigrants who came to Israel from the free world is greater than that of immigrants fleeing the countries in distress,” said Jewish Agency Chairman Natan Sharansky.

“This trend is evidence of Israel’s attractiveness as a place where it’s good to live, as well as of the success of our joint efforts to promote aliyah and strengthen connections between Jews around the world and the State of Israel,” Sharansky added.