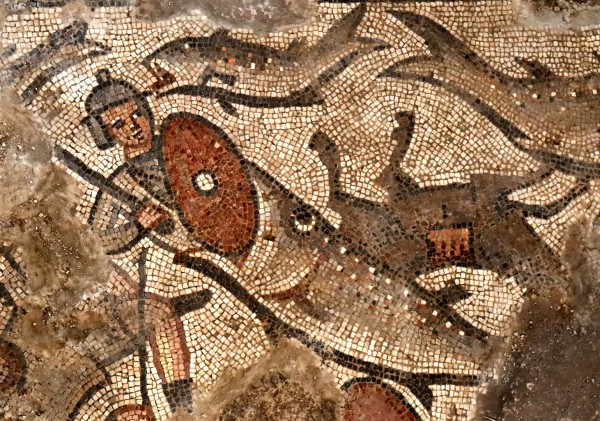 A mosaic floor panel depicts soldiers being swallowed by large fish, surrounded by overturned chariots in the parting of the Red Sea.  (Photo by Jim Haberman/ UNC Chapel Hill)

In northern Israel, on a hill just above the Sea of Galilee, an international team of archaeologists recently unearthed two beautiful mosaics depicting scenes from the Bible.  They were found in the ancient synagogue in the Jewish village of Huqoq, which is three miles west of Capernaum and Migdal (Magdala), Israel.

The two mosaics, one depicting Noah’s ark and the other the Red Sea parting, are well-preserved and were found in the nave of the ancient synagogue.

“You can see the pharaoh’s soldiers with their chariots and horses drowning, and even being eaten by large fish,” said Dr. Jodi Magness,  who not only directs the project, but also is the vice president of the Archaeological Institute of America and chair of the University of North Carolina at Chapel Hill’s Department of Religious Studies.

In contrast, the mosaic of Noah’s ark depicts pairs of elephants, leopards, donkeys, snakes, goats, sheep, camels, ostriches, lions, and bears.  Both mosaics have been removed for conservation. 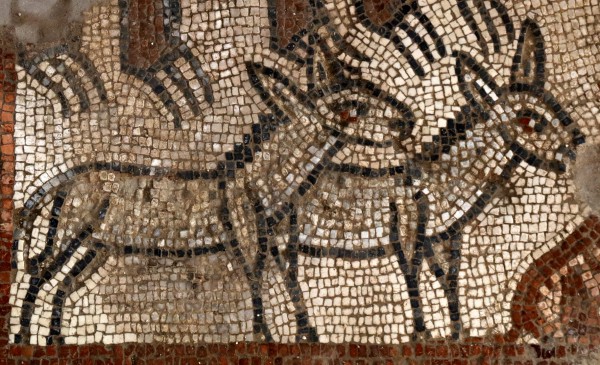 These are not the only Biblical mosaics discovered at the Huqoq synagogue.

In 2012, archaeologists found a mosaic of Samson and the foxes (Judges 15:4) in the east aisle of the synagogue.

The aisle also revealed in 2014 “the first non-biblical story ever found decorating an ancient synagogue — perhaps the legendary meeting between Alexander the Great and the Jewish high priest,” states the University of Toronto article.  Mosaics found that year hinted at a battle or possibly a parade with elephants.

The Huqoq synagogue has offered “by far the most extensive series of Biblical stories ever found decorating the floor of an ancient synagogue,” Magness stated.

“These scenes are very rare in ancient synagogues. … The only other examples that have been found are at Gerasa/Jerash in Jordan and Mopsuestia/Misis in Turkey [Noah’s Ark]; and at Khirbet Wadi Hamam in Israel and Dura Europos in Syria [the parting of the Red Sea].”  (UNC) 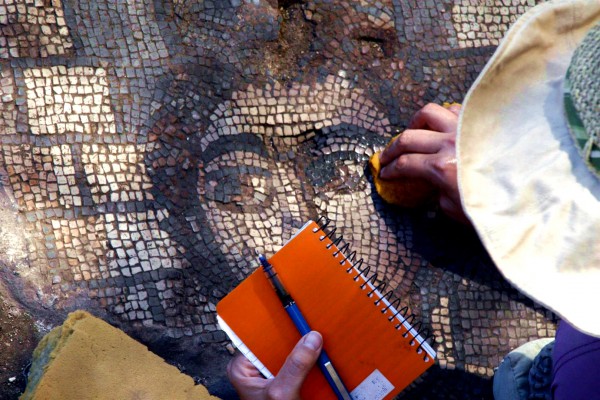 An archaeologist cleans the face of a beautiful mosaic at Huqoq’s ancient synagogue.

Incidentally, Huqoq area supervisor Dr. Matthew Grey of Brigham Young University argued in 2013 in the Journal for the Study of Judaism “that apocalyptic thought and messianic expectations flourished in Jewish Galilee throughout late antiquity, particularly in the vicinity of Tiberias,” just south of Huqoq.

The Jewish village of Huqoq has been dated to the Roman and Byzantine eras, and Grey suggests that Huqoq’s “Samson mosaics can be viewed as apocalyptic images reflecting messianic hopes that were popular in late antique Galilee.”

But the latest finds add layers of Jewish history to the town’s messianic hopes, and they also confirm the long presence of the Jewish People in the Holy Land. 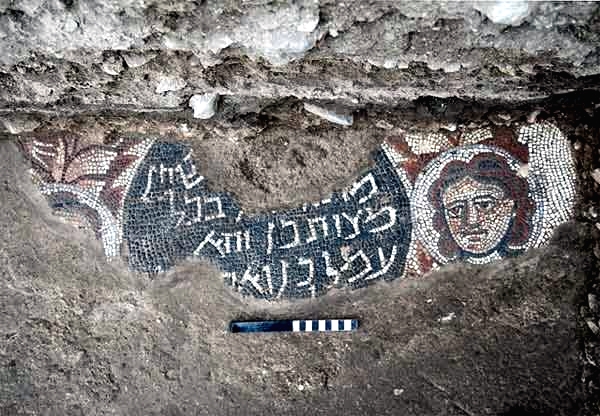