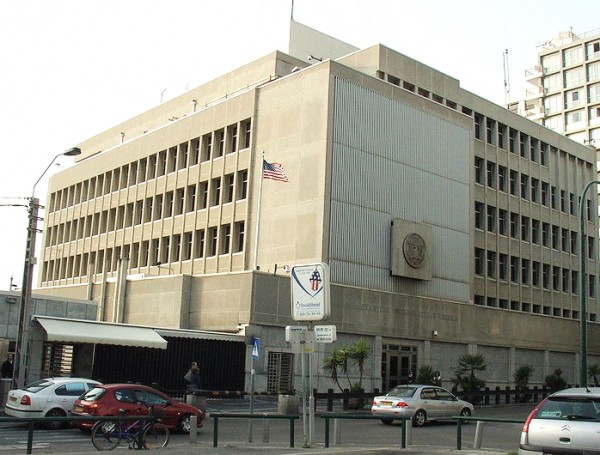 The US Embassy in Tel Aviv

“Devise your strategy, but it will be thwarted; propose your plan, but it will not stand, for God is with us.”  (Isaiah 8:10)

Israel’s domestic counterintelligence and internal security agency (Shin Bet) has revealed that it thwarted a conspiracy to blow up the US Embassy in Tel Aviv and the Jerusalem Convention Center (a venue that hosts events drawing thousands of people).  (Israel Hayom)

On December 25, 2013, the security agency arrested two Jerusalem Arabs and one from Aqaba, Samaria (northern “West Bank“) in connection with the al-Qaeda terrorist plot that involved a truck bomb and at least four suicide bombers.

“Al Qaeda has established an initial infrastructure in Judea and Samaria, which includes hundreds of members,” said a Shin Bet representative.  “It can still be stopped.”  (JP)

The arrested suspects are Iyad Khalil Abu-Sara, 23, Rubin Abu-Nagma, 31, and Ala Anam, 22.  They said they were recruited and radicalized by Gaza-based terrorist Arib al-Sham following an order for the attack from al-Qaeda leader Ayman al- Zawahiri.

The attack included a plan to shoot the tires, then the passengers, of an Israeli bus traveling from Ma’ale Adumim in the West Bank to Jerusalem, Abu-Sara revealed.

Abu-Nagma, a married father of four from the Jerusalem neighborhood of Abu Tor, along with Abu-Sara, allegedly used their Israel identification cards to scout out the areas of the potential attacks.

In interrogations, Abu-Nagma stated that he had planned to abduct an Israel Defense Forces soldier from the Jerusalem Central Bus Station and blow up a building in Abu Tor that he knew housed Jewish people.

The youngest suspect, Ala Anam, revealed to Shin Bet after his January 7 arrest his own plans to bring together a violent jihadist cell in Samaria for carrying out attacks in Israel.  (Times of Israel)

The three men revealed that they interacted with Al-Sham on Facebook and Skype, communication methods Shin Bet says are not unusual for terror cells.  (Israel Hayom) 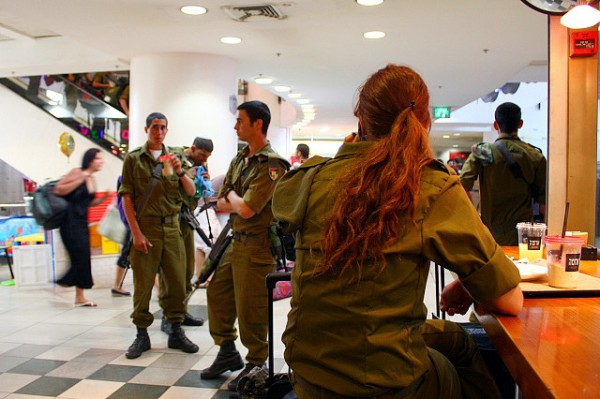 Israeli soldiers take a moment to enjoy a drink of juice as they wait for a bus at the Jerusalem Central Bus Station.

Meanwhile, last Wednesday, two Palestinians residents of Hebron in Israel’s disputed territories were arrested on suspicion of stashing illegal weapons in their home.

An M-16 assault rifle, an Uzi sub-machine gun, a carbine rifle, hand guns, more than 8,000 bullets and other spare parts were found in the home by the Israel Defense Forces, the Border Police and Israel Police.

Israel’s Meir Amit Intelligence and Terrorism Information Center stated last week that about 20 Arab Israelis and 30 Palestinian Authority residents are involved as well in fighting for or alongside al-Qaeda militants in Syria.  (Fox News)

These Arabs, together with Muslims from other countries who are volunteering to take up arms with Syrian rebels, undergo radicalization and continue their terrorist activities when they return home, a recently released study by Meir Amit stated.

The document said that when they return home, they “may be handled by al-Qaeda and global jihad organizations, exploiting the personal relationships formed in Syria with other fighters.”  (JPost)