How Does One Eulogize a 4-Year-Old Terror Victim?

“Yeshua called the children to Him and said, ‘Let the little children come to Me, and do not hinder them, for the kingdom of God belongs to such as these.’”  (Luke 18:16)

Adel Biton, who was hit in the head during a Palestine terrorist attack two years ago, is dead.

Her body had been severely compromised after a gang of Palestinian Authority Arab teens from the village of Haras sent a hail of rocks, hitting the car her mother was driving on Route 5 in Samaria.  The attack caused the car to swerve off the road and collide with an oncoming truck.

Adele, her two siblings, and mother Adva were injured in the crash.  Adele and Adva had to be cut out of the car by rescue workers.

Adele was taken to the Rabin Medical Center in critical condition with severe traumatic brain injury, but miraculously survived. 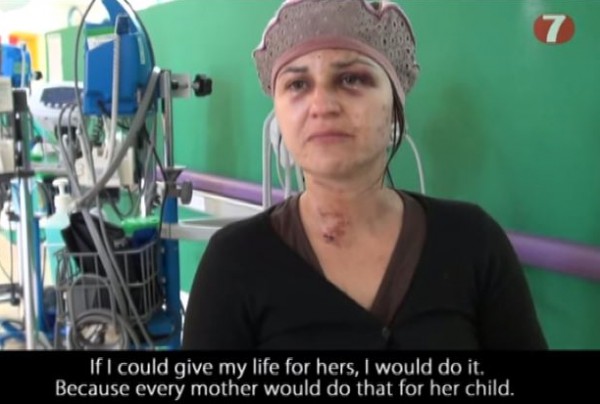 Adva Biton talks with the press after the attack.  She emphasized that the incident should not be called an accident. “They came to murder us,” she said. “They did not throw flowers and feathers at us.”  (YouTube capture)

She was transferred to the adjacent intensive care unit at Schneider Children’s Hospital of the Rabin Medical Center in Petach Tikvah where for 18 months she went through multiple brain operations.  She was susceptible to infection and remained semi-comatose.

Though fragile, she was finally released in August.

However, her condition deteriorated due to neurological injuries suffered in the attack which left her immune system vulnerable.

“Every little thing that adds stress makes a huge difference,” Adva had said of Adele.

At the funeral, attended by hundreds, Adva said, “They didn’t give you a chance, but you didn’t give up for anyone.  I didn’t agree that they say you don’t hear or don’t understand, and you proved to me that you hear and understand. You never gave up, my warrior.  Those vile people didn’t take your beauty even after you were wounded.”

Expressing his total grief, Adele’s father Rafi said, “What will I do without you?  I’m ready for anything, just not this emptiness.  You, Master of the Universe, brought me to this condition and You’re the only one who can help; either take me or return Adele to me, Adele—my little one. …  A life of sadness was decreed on us, and I say:  I’m turning the sand hourglass until I will join you or until you return to me.  The loss is complete.”  (Arutz 7) 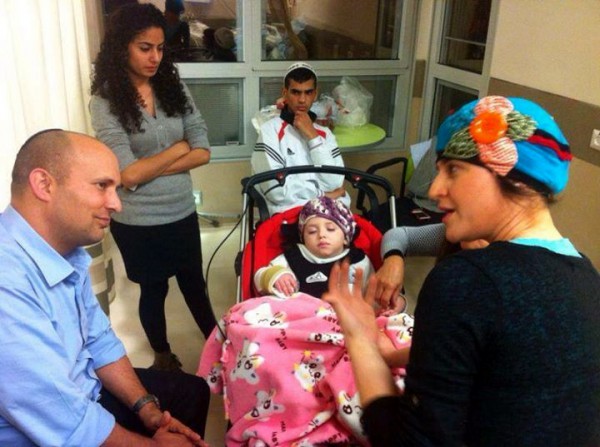 Naftali Bennet speaks with Adva Biton, while young Adele rests in a stroller.

Minister Bennett said, “I want to talk about the love Adele received from the people of Israel, from the family and from friends. This is a courageous and optimistic family, which has been fighting for life and for sanity.”

The rabbi of Yakir, Aaron Cohen, said, “How does one eulogize a 4-year-old baby? What do you tell about her?  Do you talk about her sweet smile?  There are children who are saints, and the question is not what they did in their life, but what they caused the people of Israel to do.  Adele managed to affect the lives of many people.  She instilled in us a strong connection to the people and to the country.”

Adva turned to Israeli Prime Minister Benjamin Netanyahu when, due to a technicality, burial was originally refused in Adele’s hometown.  She also called on the public to attend the funeral to pay their last respects to the young terror victim, which they did.  (Arutz 7)

Adva had called on the public to attend the funeral to pay their last respects to the young terror victim, which they did.  (Arutz 7)

Sadly, Adele is not alone.  There are many other cases of such attacks causing brain injury and death.

Asher Palmer, who was 24 and the son of American immigrants to Israel was murdered along with his baby son on September 23, 2011.  During that same month, 498 cases of rock attacks were recorded by the Israeli military.  (JP)