This past week, Nir Barkat, Jerusalem’s mayor, earned himself the nickname Supermayor after saving an Israeli from a knife-wielding terrorist.

Barkat was on his way to the municipality headquarters when he witnessed the pedestrian stabbing this past Sunday. Without hesitation, he jumped out of his car with his bodyguards and ran toward the attacker, tackling him to the ground.

According to police, the 18-year-old assailant was Mohammed Said Abu-Etzbah, a Palestinian from Ramallah illegally residing in Israel. 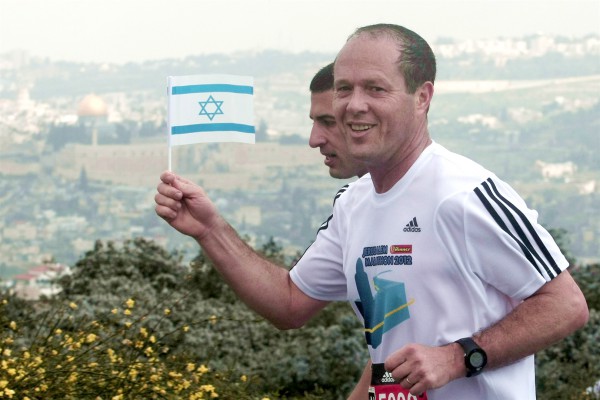 Street-camera video shows Abu-Etzbah standing to the side of a group of people that were waiting to cross the street, before he walked up to an ultra-Orthodox man and stabbed him, inflicting him with light to moderate wounds.  (Haaretz)

The victim, 27-year-old Avraham Goldschmidt, a father of four, backed away from the attacker, warding off additional blows, as the crowd at Tzahal Square fled.

“I hit him, I threw my teffilin at him and I kept eye contact with the terrorist the whole time,” Goldschmidt told YNet.  He also said he yelled, “Stabbing!  Whoever has a weapon, come help.”

The first to answer his call were 55-year-old Mayor Barkat and his bodyguards.

As they approached, one of the bodyguards drew a weapon, and the attacker threw away his knife before Barkat took him down.  Barkat told reporters the teen knew he would have been killed if he kept trying to stab people.  (USA Today)

As Barkat’s bodyguard finished detaining the attacker, Barkat comforted the stab victim, helping him walk  to the curb.

“The humane thing you did for me was rather unique—you put a coat over me as I lay down,” Goldschmidt told Barkat, who visited him Sunday night.  “It was cold on the ice,” Barkat responded.   (YNet)

The next day, at a Jewish Agency board of governors meeting attended by Barkat, agency chairman Natan Sharansky prompted the mayor to respond to the state of security in Israel’s capital city with a line that drew applause: “Do you feel secure walking the streets of Jerusalem?”

Barkat responded to the question by assuring those present at the David Citadel Hotel that Jerusalem is “one of the safest cities in the world … safer than New York, London, Paris.”  He added that Jerusalem’s murder rate per capita is a small fraction of the other chief metropolitan hubs.”  (Jerusalem Post; USA Today)

Barkat assured the crowd that his “zero tolerance” policy against the youth crime wave that began last June brought “much more cooperation than people think.  So relatively quickly, we were able to calm down the situation.”

“We became aggressive,” Barkat told the 200-member audience.  “We’re really aggressive in pursuing the bad guys, and we will continue doing so with as much brute force as we can, just to make sure that they understand that being violent does not pay.” 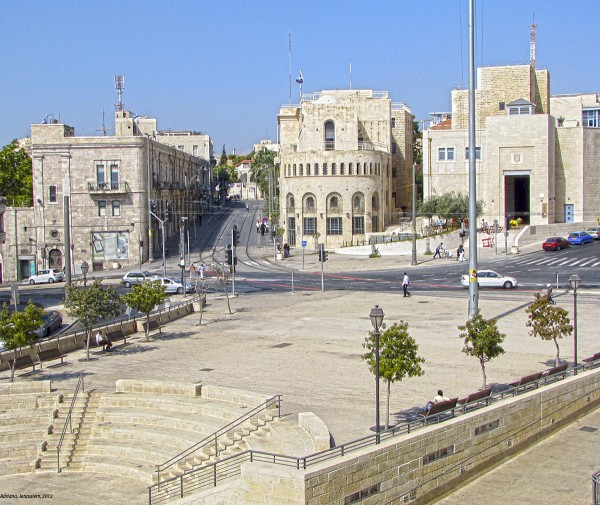 According to the Algemeiner, Barkat’s bravery came 11 years to the day of another of his heroic interventions after an Al-Aqsa Martyrs’ Brigades suicide bomber blew up Egged bus #14a.  The Liberty Bell Park bus bombing saw eight passengers killed and another 60 injured, including many children heading to school.

“I heard a terrifying explosion … Immediately I realized it was an attack.  I stopped the car and ran like crazy onto the bus.  I went through what remained of the door, and being as it was less than half a minute after the blast, I was the first one on the bus … alone with the dead and wounded.  It was completely silent.  I immediately started to rescue people,” Barkat said, describing how he carried victims from the bus to the sidewalk, including then 16-year-old Liz Montilio.

“I saw that she was losing a lot of blood from a shrapnel wound in a main artery.  I stopped the flow of blood using my finger, I pushed hard and waited for the evacuation personnel.  I knew that if I did not block the artery, she would die immediately,” Barkat said.  “I talked to her, encouraged her, and promised her that she would be fine.  When we sent her to the hospital I had no idea if she was alive or dead, and went on to take care of the other wounded.”  (Algemeiner)

Montilio did survive and years afterward invited Barkat to her wedding.