“The Lord, who stretches out the heavens, who lays the foundation of the earth, and who forms the human spirit within a person, declares: ‘I am going to make Jerusalem a cup that sends all the surrounding peoples reeling.'”  (Zechariah 12:1–2)

Last week, the United Kingdom’s advertising watchdog, the Advertising Standards Authority (ASA), banned an Israeli tourism advertisement for implying that the Old City of Jerusalem is part of Israel.

The “Israel Land of Creation” ad is a newspaper brochure that shows a panorama of the walled Old City with the text “Israel has it all.”

“Everyone falls for the Old City, with its narrow (and car-free) alleys, teeming pilgrims and bazaar-like buzz,” reads the ad, showing a photograph of the Old City, the Dome of the Rock, and the modern areas of larger Jerusalem.

The walls of the Old City of Jerusalem with modern Jerusalem in the background.

The ASA took action after receiving a complaint against the ad and ruled it violated its code on misleading advertising.

“We understood that the status of the territories in question was the subject of much international dispute,” the ASA stated in its adjudication report.

“We therefore considered the presentation of the ad would mislead consumers into believing that the Old City of Jerusalem was part of Israel and into taking a transactional decision that they would otherwise not have taken.”

The Israeli Government Tourist Office responded to the complaint, saying the brochure was not making a political statement.  (Times of Israel)

Jordanians captured eastern Jerusalem, including the Western Wall and Temple Mount in 1949, a year after Israel became a state.  However, the State of Israel gained back control of the entire Old City and Eastern Jerusalem following the 1967 Six Day War. 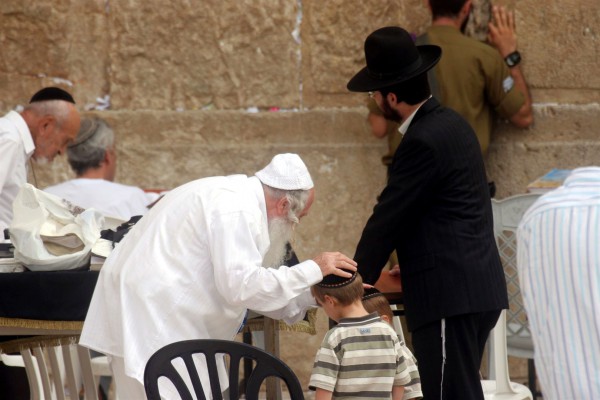 A Jewish elder prays for two Orthodox Jewish boys at the Western (Wailing) Wall in the Old City of Jerusalem.

Even though Israel recaptured the territory while defending itself from the six neighboring nations that attacked her, the ownership of the eastern part of the capital has since been disputed by internationals.

Sadly, the British advertising authority has sided with those who dispute Jerusalem’s identity.

Although Jordan makes no claim over Jerusalem, the Palestinian narrative does claim the holy city as their own—the same city that Adonai said He has chosen for Himself—seeking to make eastern Jerusalem the capital of a future “State of Palestine.”

“But for the sake of my servant David and the city of Jerusalem, which I have chosen out of all the tribes of Israel …”  (1 Kings 11:32) 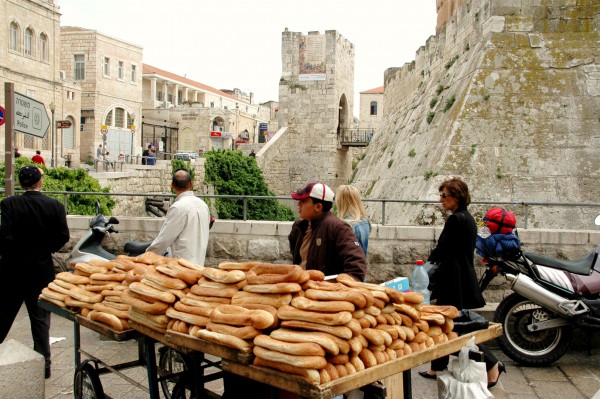 Arab bread vendor and tourists in the Old City of Jerusalem.

Because of this Palestinian narrative, internationals have stalled and boycotted Israeli infrastructure repairs and residential growth in Jerusalem—activities that are expected in urban development anywhere else in the world where cities respond to the developing needs of its citizens.

“A separate Palestinian state, as imagined in a long-stalled two-state solution, would make East Jerusalem its capital,” claims Washington Post journalist Ishaan Tharoor.  “But the expansion of Israeli settlements and housing blocks in the West Bank and areas of East Jerusalem has made that a distant reality.”

This international preoccupation with dividing Jerusalem—East to Palestine and West to Israel—is an indicator of the times in which we live.

In the Last Days, as the Prophet Zechariah states, Jerusalem will become a cup of staggering and an immovable rock as the nations come against her.

“Judah will be besieged as well as Jerusalem.  On that day, when all the nations of the earth are gathered against her, I will make Jerusalem an immovable rock for all the nations.  All who try to move it will injure themselves.'”  (Zechariah 12: 2–3)