“Fix these words of Mine in your hearts and minds; tie them as symbols on your hands and bind them on your foreheads.”  (Deuteronomy 11:18)

Nine miniature phylactery scrolls from the Dead Sea collection that have lain unexamined since the 1950s have recently been discovered at the Israel Museum in Jerusalem.

In Judaism, phylacteries (tefillin) are worn during the morning prayers.  They consist of a pair of leather cases, one worn over the forehead and the other wrapped around the arm and pointing toward the heart.

Each case contains Biblical passages from Exodus and Deuteronomy, including the Shema: “Hear, O Israel: the LORD our God, the LORD is one,” found in Deuteronomy 6:4. 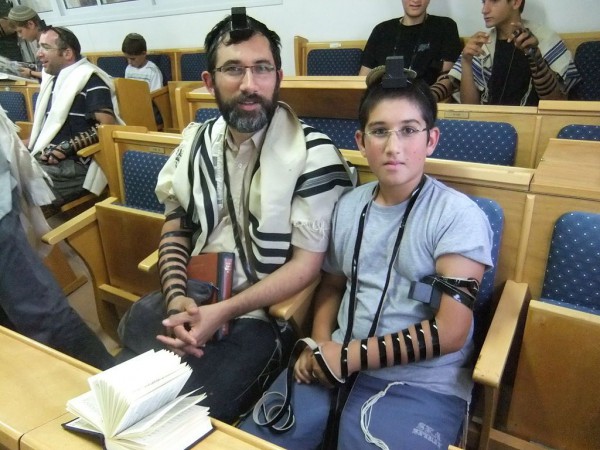 A father and son wear tefillin, which symbolize devotion to God and the Torah, during morning prayers.  Because the father is left-handed, he wears his on the right hand. Because his son is right-handed, he wears tefillin on the left hand.

As many as two dozen tefillin scroll fragments were uncovered during excavations of the Qumran caves overlooking the Dead Sea in the 1950s in connection with the thousands of famous scrolls containing Bible text and sectarian texts from the Second Temple period.

These scrolls have been kept in the Israel Museum where they have been examined by many scholars coming from all parts of the world.  Until now, however, these nine have been ignored.

Dr. Yonatan Adler of Ariel University came upon one phylactery case from Qumran while searching through the climate-controlled storerooms at the Israel Antiquities Authority. 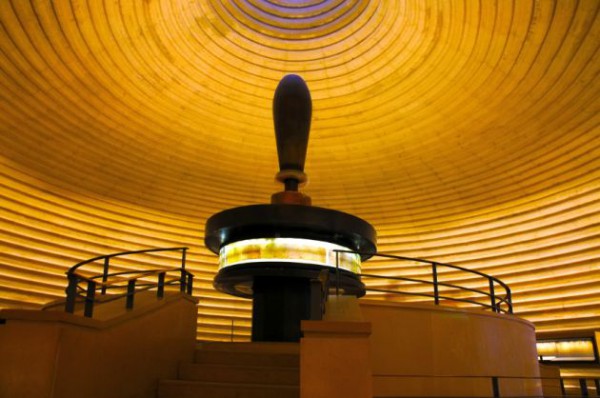 The interior of the Shrine of the Book, the home of the Dead Sea Scrolls at the Israel Museum in Jerusalem.

A CT scan of the tefillin at Shaare Zedek Hospital suggested a parchment was inside the boxes.  Realizing that other such scrolls may still be in storage, he went to the Dead Sea Scroll labs at the Israel Museum.

There he found additional scrolls in the compartments of a tefillin case which had been recorded but placed aside sometime in the 50s.

They remained within the leather box in which they were found and have probably been there for about 2,000 years.

Although these tefillin scrolls are unlikely to cause any linguistic or religious breakthroughs, they do reveal much about religious practices during the Second Temple period, the time of Yeshua (Jesus).

The scrolls indicate the use of the tefillin at that time, perhaps mostly among the Pharisees and the Essenes, and it is possible that Yeshua (Jesus) also prayed using tefillin.

Once they are opened they will tell us more about religious practices of the Jewish people during the Second Temple Period between the years of 530 BC and AD 70.  (Fox) 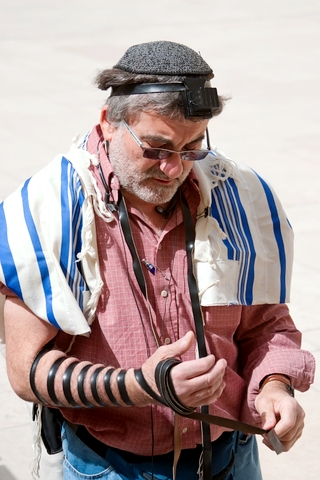 A Jewish man puts on tefillin for morning prayer.

Professor Lawrence Schiffman, of Yeshiva University, an expert on Second Temple Judaism, explained that several tefillin texts found at Qumran are identical with those being used today, although others have added passages, such as the Ten Commandments.

He expects these newly discovered ones to also be similar.

It has been left to the Israel Antiquities Authority (IAA) to unravel and preserve this new find, a painstaking process which will require much preparation.

Pnina Shor, who is curator and head of the IAA’s Dead Sea Scrolls Projects will head the opening of the scrolls and their preservation.

“We’re going to do it slowly, but we’ll first consult with all of our experts about how to go about this,” she said.  “We need to do a lot of research before we start doing this.”  (Times of Israel)