The Israel Antiquities Authority (IAA) has identified the remains of a charred parchment scroll, which was found near the Dead Sea 45 years ago, as a portion of the Book of Leviticus.

A micro-CT scanner captured a 3D image of the blackened parchment.  That image was sent to University of Kentucky computer-science professor Brent Seales and his research team who have developed imaging tools that unraveled the 3D image of one page into a flattened layer.

“The page actually comes from a layer buried deep within the many wraps of the scroll body, and is possible to view it only through the remarkable results of our software, which implements the research idea of ‘virtual unwrapping,'” Seales said.  (UKY)

Researchers were surprised to actually see writing on the ancient burnt fragment.  The scanner and software technology team not only revealed the first eight verses of the Book of Leviticus, but also the date the parchment burned—1,500 years ago.

“This discovery absolutely astonished us; we were certain it was just a shot in the dark but decided to try and scan the burnt scroll anyway,” Dead Sea Scrolls project curator Pnina Shor said.  (Christian Post)

The burnt scriptural fragment was found in the ruins of Ein Gedi—now known for its waterfalls and hiking trails.  In the 4th–7th, a prosperous Jewish village with a decorated synagogue and an ark to house the Torah scrolls was situated there.

“This is the first time in any archaeological excavation that a Torah scroll was found in a synagogue, particularly inside a Holy Ark,” the IAA website states. 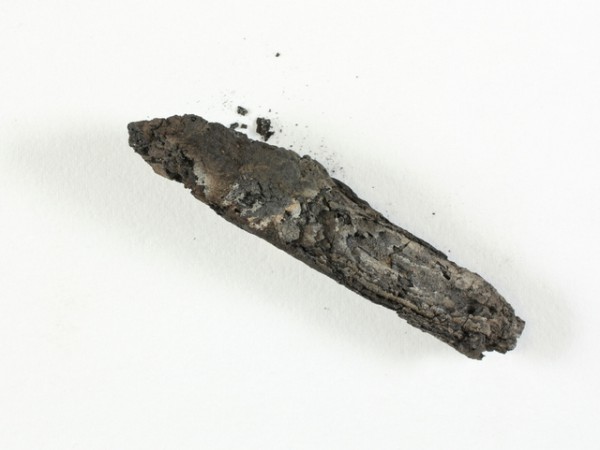 A recent scan of this charred scroll, which was found in an Ein Gedi ark, revealed the first eight verses of Leviticus.  (IAA photo by Shai Halevit)

“The settlement was completely burned to the ground, and none of its inhabitants ever returned to reside there again, or to pick through the ruins in order to salvage valuable property,” Ein Gedi excavation head Sefi Porath told Jerusalem Post.

“In the archaeological excavations of the burnt synagogue, in addition to the charred scroll fragments [found inside the synagogue’s Torah ark], we found a bronze seven-branched menorah, the community’s money box containing 3,500 coins, glass and ceramic oil lamps, and vessels that held perfume,” Porath said. 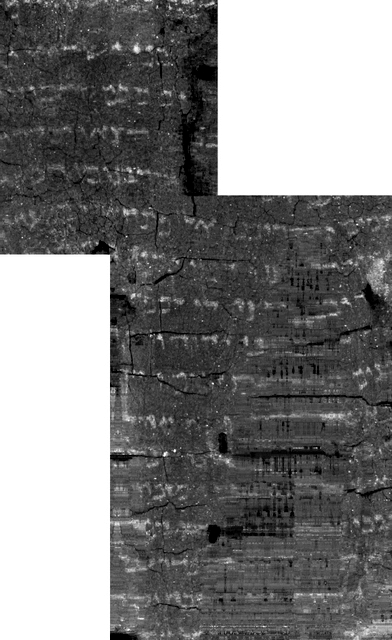 One scan is merged with another to connect the text (Seth Parker, University of Kentucky, IAA)

The Torah fragment was chosen for deciphering a year ago by the Israel Antiquities Authority, in connection with Merkel Technologies Company, Ltd., which provided the Bruker Skysan model 1176 scanner.

Seales described it as being “at a very high resolution, probably a hundred times more accurate than the medical procedures that we do.”  (Christian Post)

The only scrolls discovered in Israel that are older than the Ein Gedi parchment are the famous 2,000-year-old Dead Sea Scrolls, which consist of both Biblical and non-Biblical writings.  (IAA)

Among the first eight verses of Leviticus that the scan made legible are verses that relate God’s instructions about bringing offerings to the Lord: