“For the Lamb at the center of the throne will be their shepherd; ‘he will lead them to springs of living water.’”  (Revelation 7:17)

On Thursday, the Israel Antiquities Authority (IAA) announced that a section of aqueduct from Jerusalem’s 2,000-year-old water source had been discovered.

It was the same day that a five-day international gathering of Believers for Shavuot (Feast of Weeks, or Pentecost) began in Jerusalem—thousands drawn together to celebrate the Source of Living Water revealed 2,000 years ago.

A multitude of Messianic Jews and Christians from 70 nations filled the 11,600-seat Jerusalem Pais arena for the Spirit-themed Empowered21 Global Congress May 20 to 25.

The Empowered21 promo states that Jerusalem is “the birthplace of the outpouring of the Holy Spirit;” and, as Yeshua revealed, “‘Whoever believes in Me, as Scripture has said, rivers of living water will flow from within them.’  By this he meant the Spirit, whom those who believed in him were later to receive.”  (John 7:38–39)

Meanwhile, Jerusalem’s Lower Aqueduct reveals the reliance of the Holy City on long-distance water conduits for the physical life of its inhabitants.  (JPost)

The IAA has announced that a section of ancient Jerusalem’s lower aqueduct was exposed in the Eastern Jerusalem neighborhood of Umm Tuba.

The Israeli Antiquities Authority found the section of the ancient pipeline while excavating for antiquities before a modern sewage system will be laid for Arab-majority villages Umm Tuba and Sur Bahar in southern Jerusalem.

Dig leader Yaakov Billig said the conduit was operating on and off until 100 years ago.  (JP)

Built by the Hasmonean kings, it was the primary source of Jerusalem’s water supply, so city leaders took good care of it for over 2,000 years.  It was additionally protected with a terra cotta pipe during the Ottoman period.  One hundred years ago, an electrically operated system replaced it.  (JP, IAA)

Constructed to carry water across 21 km (13 miles) for mass distribution, the aqueduct would draw from near Solomon’s Pools south of Bethlehem.  The source spring, Ein Eitam, starts at a height of 23 cubits above the floor of the Holy Temple (Beit HaMikdash).

The aqueduct’s gentle slope drops one meter per kilometer, flowing under Bethlehem as far as the Jerusalem neighborhoods of Umm Tuba, Sur Bahar, East Talpiot and Abu Tor 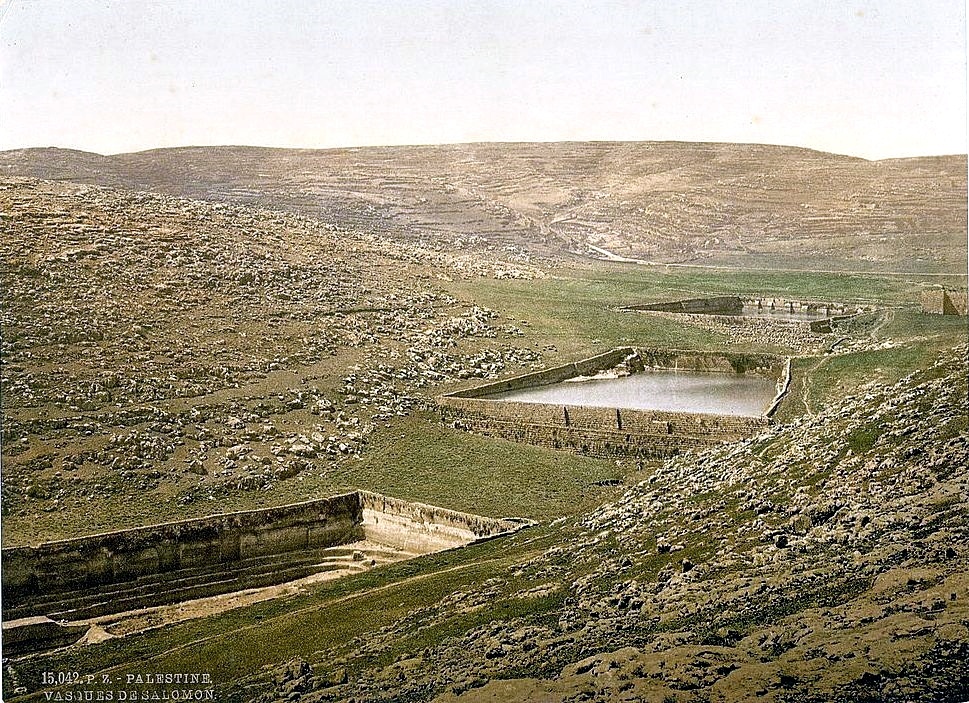 This photo of Solomon’s Pools, part of an ancient waterway supplying water to Jerusalem, was taken between 1890 and 1905.  The pools are located 5 kilometers (3.1 mi) southwest of Bethlehem.  These pools are believed to be the source of water for the Temple Mount.

The aqueduct also flowed into the mikvah at the Temple for the washing of the high priest on Yom Kippur before his entry into the Holy of Holies; without the priest’s purification, it would have been impossible for him to come into God’s presence.  (Ohr Somayach)

The IAA studied and documented the newly uncovered section in Umm Tuba before covering it up again “for the sake of future generations.”  (JP)

“‘If you knew the gift of God and who it is that asks you for a drink, you would have asked him and he would have given you living water.’  ‘Sir,’ the woman said, ‘you have nothing to draw with and the well is deep. Where can you get this living water? …’ Yeshua answered,  ‘Everyone who drinks this water will be thirsty again, but whoever drinks the water I give them will never thirst.  Indeed, the water I give them will become in them a spring of water welling up to eternal life.'”  (John 4:10–11, 13–14)