Danon to UN: Remove the 120,000 Hezbollah Rockets Aimed At Israel

“For the king of the North will muster another army, larger than the first; and after several years, he will advance with a huge army fully equipped.”  (Daniel 11:13)

On Tuesday this past week, Israeli ambassador to the United Nations Danny Danon gave the UN Security Council (UNSC) recently declassified intelligence on the Hezbollah terror group in southern Lebanon, and demanded its removal, per UN Resolution 1701.

Financed by Iran, Hezbollah has sunk its teeth into southern Lebanon, perpetuating terrorism.  Danon informed the UNSC that Hezbollah has grown its missile caches 17 times since the Second Lebanon War, 10 years ago to 120,000 rockets targeting Israel.

Hezbollah’s rearmament in the last decade violates UN Resolution 1701, which was issued after the Second Lebanon War.  It calls to disarm “all armed groups in Lebanon so that there will be no weapons or authority in Lebanon other than that of the Lebanese State.” 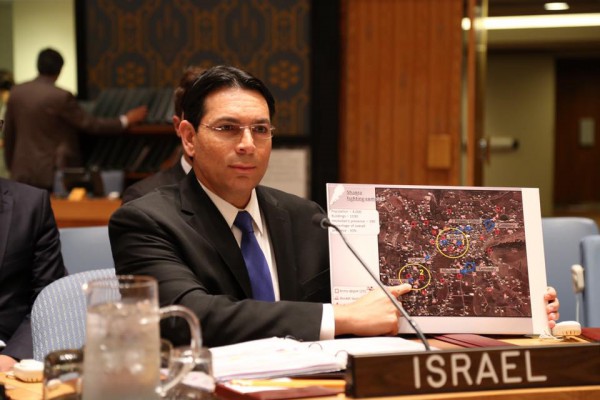 Israeli Ambassador to the UN Danny Danon shows the UN Security Council a map of southern Lebanon villages infiltrated by Hezbollah. The blue squares are schools and mosques, which are surrounded by infantry positions, rocket launchers, and ammunition depots. (Source: Danny Danon Facebook)

“When the war ended, this Council pledged that Hezbollah would no longer be allowed to threaten Israel and hold the people of Lebanon hostage,” Danon said.

“I have the unfortunate task of informing this council that 10 years later, the situation has gone from bad to worse.  The government of Lebanon never stopped Hezbollah, and Hezbollah never stopped its military buildup.” 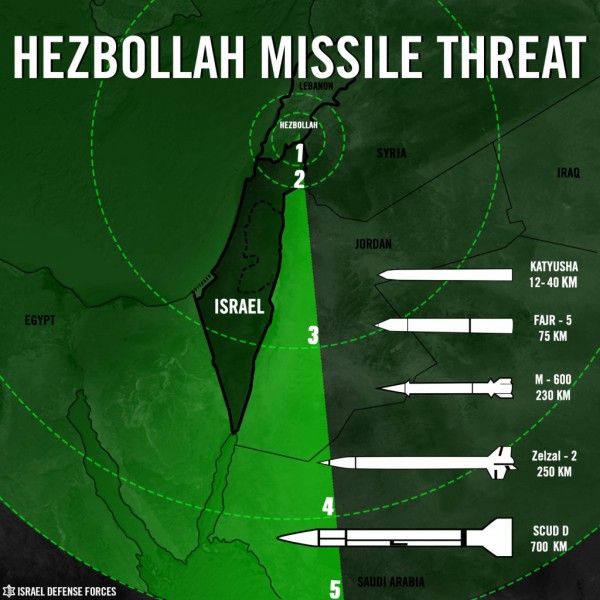 A map indicating the range of Hezbollah missiles. (IDF graphic)

Hezbollah also issued rockets and missiles against Israel in the summer of 2014, during Operation Protective Edge, primarily between Israel and Gaza-based terror groups.  Last January, the terror group shot a missile at an IDF convoy, killing two Israeli soldiers and, this January, they blew up a roadside bomb targeting Israeli soldiers.

Yet, the blog notes, “Long before Hezbollah was besieging Syrian cities, they were staging sophisticated attacks on Israel.  In the summer of 2006, the attacks came to a head.  Hezbollah kidnapped two IDF reservists, and Israel engaged with this threat on its northern border.”

Now, Danon told the UNSC, Hezbollah has “more missiles below ground in Lebanon than the European NATO allies have above ground” — about 120,000. Moreover, they disperse their weapon depots and rocket launchers around mosques and schools

“While the terror organization doesn’t own planes and tanks, in every other way its improved capabilities match those of a medium-level army.  If war breaks out on Israel’s northern front, air force airstrikes won’t be enough,” stated the Haaretz newspaper this month.

Following his UN presentation on Wednesday, Danon seemed hopeful, telling Yoni Kempinski at Arutz Sheva that the security council would respond to the pictures he shared of the Hezbollah-infested Lebanese villages.

“When the ambassadors saw the pictures, they understood that when the inevitable next conflict comes, we will have to take action to retaliate and will be forced to damage those villages,” he said.   “We know here at the UN it’s not easy [to carry influence], but we present the information because we believe you can’t argue with the facts.”

Yet, Kempinski recognizes that at the UN, Israel faces “overwhelming bias and hostility” and asked Danon whether Israel could achieve any “positive developments” there.

“I believe we can do more here in the UN.  We shouldn’t be afraid,” Danon responded.  “I came here to fight, to protect the truth, and to defend Israel; we do this day in and day out.

“Sometimes we also have victories,” he said, referring to his election as chair of the UN legal committee three weeks prior. 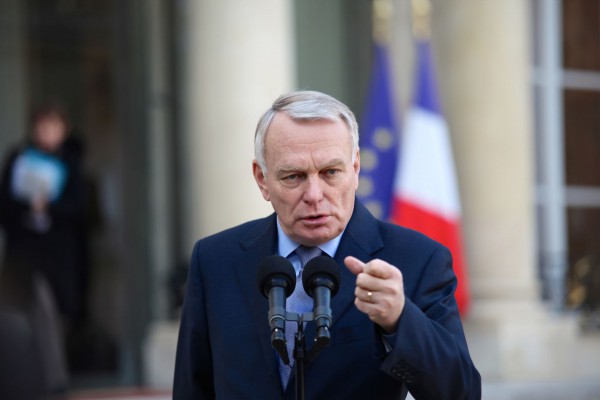 “It’s clear that Foreign Minister Ayrault would not meet with the ‘political wing’ of the Islamic State,” said Israel’s Foreign Ministry in a statement released the same day.

“It’s a shame that the French minister didn’t consult with Arab states that do not make a distinction between the military and political arms of Hezbollah,” the ministry stated.