“’Mountains of Israel, hear the word of the Lord.  This is what the Sovereign Lord says: The enemy said of you, “Aha!  The ancient heights have become our possession.”’ … I am concerned for you and will look on you with favor; … I will cause many people to live on you — yes, all of Israel.   The towns will be inhabited and the ruins rebuilt.”  (Ezekiel 36:1–2, 9–10)

In light of international peace discussions over Syria that identify Israel’s Golan Heights as Syrian territory, Israeli Prime Minister Benjamin Netanyahu convened his Cabinet in the Golan on April 17, declaring, “The Golan Heights will remain in Israel’s hands forever.”

The Cabinet’s meeting in Ramat Golan was the first since the territory’s capture from Syria in 1967 and its annexation in 1981.

“It is time that the international community recognized reality,” Netanyahu said at the Cabinet meeting.  “Whatever happens on the other side of the border, the border itself will not move.

“Secondly, after 50 years it is time that the international community realized that the Golan will remain under Israeli sovereignty,” he said, underlining the territory’s ancient Jewish history, “documented by dozens of ancient synagogues around us.”

“In the 49 years Israel has controlled the Golan, it has been a place of peace and prosperity.  Israel today is the solution, not the problem,” he added, pledging: “Israel will never come down from the Golan Heights.”  (BIN) 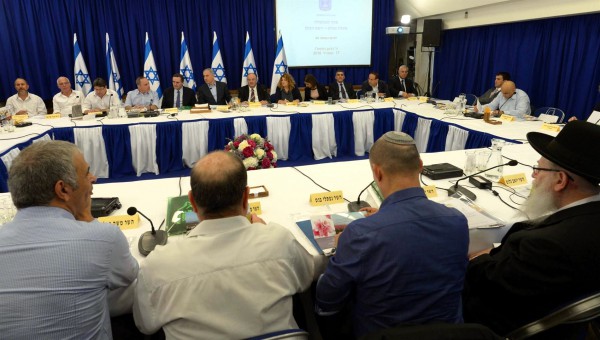 On April 17, the weekly Cabinet meeting was held on the Golan Heights in honor of the 34th government’s first year in office.

In a response to Netanyahu’s oath, Syrian Deputy Foreign Minister Faisal al-Mekdad issued a threat of war, stating that Syria would “retake the Golan Heights by any means necessary, including using military force.”

UN Special Envoy for Syria and peace negotiator Staffan de Mistura, condemned the Golan-based meeting as an “Israeli escalation,” and also alleged a link between Israel, the Islamic State, and the Al-Nusra Front, an anti-government force in Syria.

The Arab League echoed de Mistura’s condemnation, calling Netanyahu’s words “a new escalation that represents a brazen violation of international law,” while the US State Department echoed its stance that it does not recognize the Golan Heights as part of Israel. 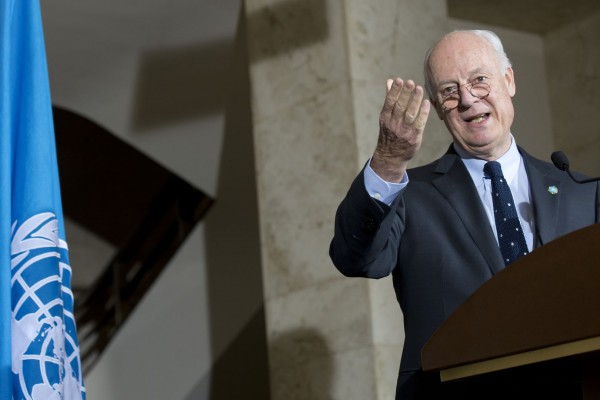 Staffan de Mistura, UN Special Envoy to Syria, speaks to journalists following the meeting with a delegation of Syrian officials in the third round of the intra-Syrian talks in Geneva.  (UN photo by Jean Marc Ferré)

Bashar Jaafari, Syria’s permanent representative to the UN, also reacted, stating, “We reaffirmed to de Mistura Syria’s right to recover the occupied Syrian Golan up to the 4th of June 1967 line using all legal means according to the UN charter, including Article 51 of the Charter on self-defense.”

In a meeting, 15 members of the UN Security Council (UNSC) also “expressed their deep concern over recent Israeli statements about the Golan and stressed that the status of the Golan remains unchanged,” said UNSC president and China’s UN Ambassador Liu Jieyi.

Liu pointed to December 1981 UN Resolution 497, which states that “the Israeli decision to impose its laws, jurisdiction, and administration in the occupied Syrian Golan Heights is null and void and without international legal effect.”  (NYT)

In response, the Israel Foreign Ministry said that “the Security Council’s announcement ignores the reality in Syria.”

Meanwhile, an American official stated that taking sides on the Golan would interfere with diplomatic peace talks between world powers and endanger opposition forces.  (Haaretz)

US State Department spokesman John Kirby said the Golan’s return to Syria “should be decided through negotiations between the respective parties.”

“Who is Israel supposed to negotiate with about the future of the Golan?  Islamic State?  Al-Qaeda?  Hezbollah?  The Iranian and Syrian forces which have slaughtered thousands of people?” Israel’s Foreign Ministry asked. 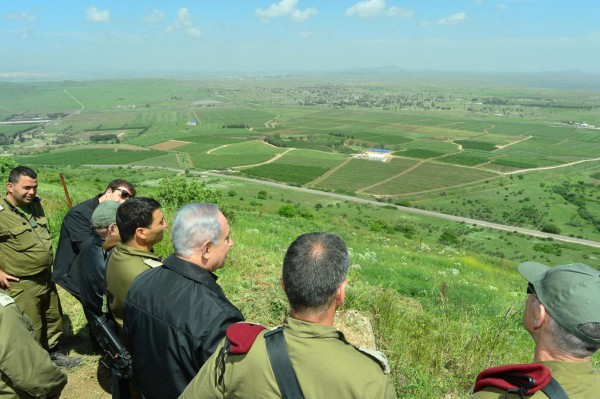 Prime Minister Benjamin Netanyahu toured the Golan Heights and oversaw an IDF exercise. The Prime Minister received a briefing on the exercise and met with the soldiers.  (GPO photo by Kobi Gideon)

At the Golan Cabinet meeting, Netanyahu also relayed an April 16 phone conversation with Secretary of State John Kerry on the Syrian peace talks.  The prime minister said he insisted that Israel’s security should be included in a peace accord, which would mean, “at the end of the day, Iranian, Hezbollah, and ISIS forces would be expelled from Syrian territory.”

On a visit to Moscow on April 21, Netanyahu also told Russian President Vladimir Putin that the Golan Heights is one of Israel’s “clear red lines for our self-defense.”

“First of all, we are acting to the best of our ability to prevent the transfer of advanced weaponry from Iran and Syria to Hezbollah in Lebanon.  Secondly, we are working to prevent the establishment of an additional terrorist front against us from the Golan Heights.  These are our red lines, and we will continue to maintain them,” Netanyahu told Putin.  (JPost)

“We will not go back to the days when they fired at our communities and at our children from atop the Heights,” Netanyahu said.  “Therefore, with or without … agreement, the Golan Heights will remain under Israeli sovereignty.”