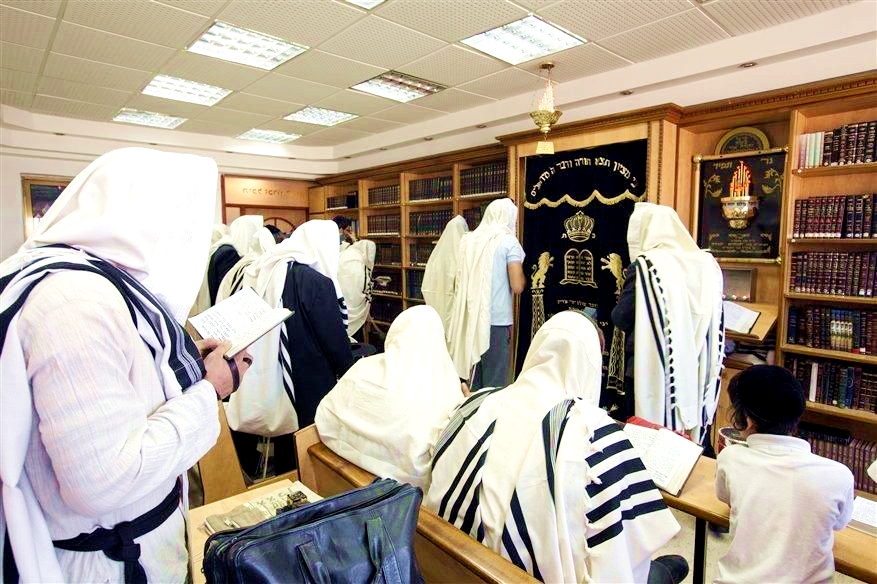 “O God, do not remain quiet; Do not be silent and, O God, do not be still.  For behold, Your enemies make an uproar, and those who hate You have exalted themselves.  They make shrewd plans against Your people, and conspire together against Your treasured ones.  They have said, ‘Come, and let us wipe them out as a nation, that the name of Israel be remembered no more.’”  (Psalm 83:1–4)

At about 7 a.m., the terrorists, who were armed with meat cleavers, an ax, and a gun, hacked worshipers, shooting and stabbing as they went. 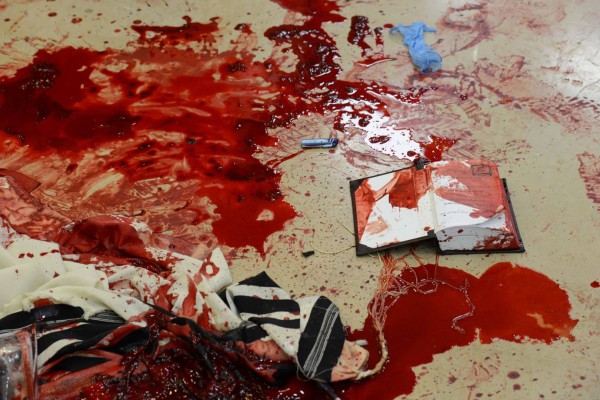 The blood of victims mingled with a tallit (prayer shawl) and a siddur (Jewish prayer book) in the floor of Kehillat Bnei Torah synagogue in Jerusalem.  (Photo: GPO)

“I tried to escape.  The man with the knife approached me.  There was a chair and table between us … my prayer shawl got caught.  I left it there and escaped,” Yossi told Channel 2 TV.  He was praying at the synagogue at the time of the attack.  (YNet)

Yaakov Amos, 45, said of one of the assailants: “He began to carry out a massacre. He was shouting ‘God is great,’ and shooting one after another, one, two, three.  Most were praying with their back to him.”  (NYT)

Deceased above are Rabbi Avraham Shmuel Goldberg, 68, Rabbi Calman Levine, 55, Rabbi Mosheh Twersky, 59, and Rabbi Aryeh Kopinsky, 43, all residents of the Har Nof neighborhood and three of them are American citizens, and the reason that the FBI is investigating.  An Israeli policeman, Zidan Sayif, 27, who was the first policeman on the scene, later died of his wounds.

Magen David Adom paramedics were also shot at by the terrorists.

“Inside there was someone singing.  I ran into the synagogue, there was a gunshot victim lying on the floor.  I tried to treat him, but the gunfire started in my direction and we fled.  I pulled the wounded man along,” one paramedic said.  (YNet)

The attack was carried out by Uday and Ghassan Abu-Jamal, cousins from Jabel Mukaber, a Jerusalem neighborhood.  The two members of the Popular Front for the Liberation of Palestine (PFLP) and were related to Jamal Abu Jamal, a prisoner who was released as a goodwill gesture during the 2013-14 Israeli-Palestinian peace talks.

Uday and Ghassan were shot by police in an ensuing gun battle. 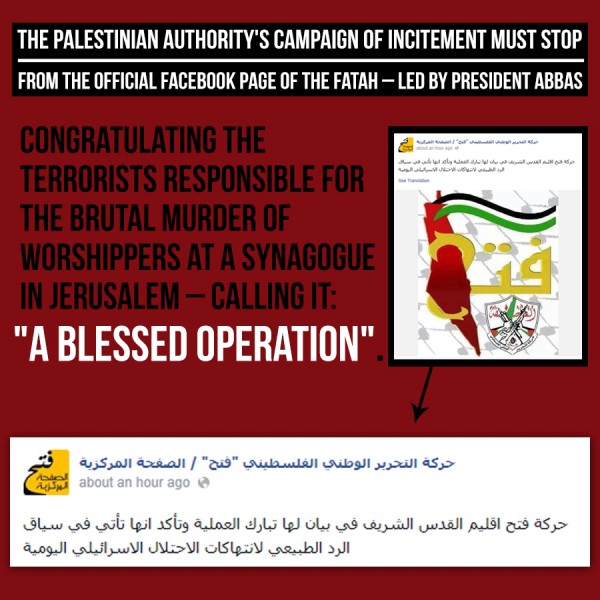 Last night, at the funeral for three of the victims, the rabbi of Kehillat Bnei Torah, Rabbi Yitzchak Mordechai Rubin said, “When we count the widows and orphans that were added to the Israeli nation this morning, four widows and 24 orphans are on one street.”

“We are here, standing in front of these three holy men, the best of our community, Torah scholars whose blood flowed like water,” he said.

Leaders and officials around the world condemned the bloody attack.

“Our thoughts & prayers are with the people of Israel,” he tweeted.

US Ambassador Dan Shapiro stated, “On behalf of the United States government and the American people, I condemn this terrorist attack in the strongest possible terms. Murdering worshipers at prayer in a synagogue is an act of pure, unadulterated evil.”

Bahrain’s Foreign Minister, Khalid Bin Ahmed Al-Khalifa said in a statement, “The murder of Jews praying in a synagogue is a crime.  The injustice of the occupation does not give a right to cause harm to innocent worshipers.” 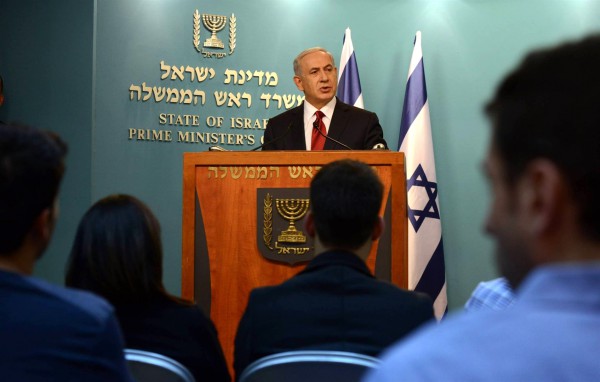 Israeli Prime Minister Benjamin Netanyahu responds to the massacre, which has occurred less than a week after his visit to Jordan to discuss the problem of Palestinian violence in Jerusalem.

Not everyone condemned the massacre, however.

Palestinians in Gaza celebrated the murderers in the streets, throwing candy and flaunting knives and axes.

Israeli Prime Minister Benjamin Netanyahu decried the incitement by Hamas and Fatah that is responsible for inciting the current wave of Palestinian violence in Jerusalem and throughout Israel.

“There is daily, even hourly, incitement on the streets of the Palestinian Authority.  There, not only do the most reprehensible murderers become the heroes of Palestinian culture, but there is unending, constant incitement against the very existence of the State of Israel, against the security of Israel’s citizens, in schools, the media, mosques, everywhere, and this is the root of the conflict: The refusal to recognize—and educate for—the existence of the state of the Jews,” he said.

Because three of the five people who were killed were dual American-Israeli citizens, the FBI will investigate Jerusalem synagogue attack, according to US law enforcement officials.  (YNet)